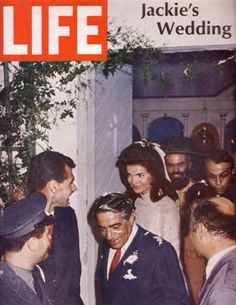 While I can't find any story on it (someone out there might be able to do so) I know that there was a big controversy in the Catholic Church in the USA after Jackie married Aristotle and also when she received Holy Communion at a Catholic Mass and was photographed doing so. Many Catholics who were not so rich as Jackie, felt that her wealth bought her Holy Communion without an annulment.

This is from Wikipedia:

On October 20, 1968, Jackie Kennedy married her long-time friend Aristotle Onassis, a wealthy Greek shipping magnate who was able to provide the privacy and security she sought for herself and her children.[146] The wedding took place (without Catholic sanction) on Skorpios, Onassis's private Greek island in the Ionian Sea.[147] The marriage brought her considerable adverse publicity. The fact that Aristotle was divorced and his ex-wife was still living led to speculation that Jacqueline might be excommunicated by the Roman Catholic church, though that idea was explicitly dismissed by Boston's Archbishop, Cardinal Richard Cushing as "nonsense."[148] She was condemned as a "public sinner,"


This idea of saying she's excommunicated, that she's(Jackie Kennedy Onassis)  a public sinner—what a lot of nonsense. Only God knows who is a sinner and who is not. Why can't  she marry whomever she wants?

The speaker defending Jackie Kennedy's marriage to Aristotle Onassis was no gossip columnist or pundit—indeed, few society reporters were so disposed. He was Richard Cardinal Cushing, Archbishop of Boston, Prince of the Holy Roman Church and—as it turned out last week—foremost a friend in need.

My comments: Illicit "marriages" in the Catholic Church and the possibility of receiving Holy Communion without an annulment was in fact the practice in the 1960's and all the way through Pope Benedict's papacy. Pope Francis has placed this "pastoral" theology on steroids.

Some say that this is out of control now. Others say it just confirms the sense of the faithful, to include many in the hierarchy as well as the current pope and must go forward.

Richard Cardinal Cushing was not the brightest bulb. Pathetic that a cardinal couldn't understand basic Latin. He needed a translator at the Council. His gravest fault was that he substituted sentimentality for theology and paved the way for the meltdown of the Catholic Church in Boston. He tolerated anything the Kennedy's said or did. I guess he valued their financial support more than the Faith.

Cushing was ill in his final years, even back to 1963 when he presided over the JFK funeral. I suspect too he did not want to be the "fly in the ointment" after all Jackie had been through in the previous 5 years---the death of her husband just fee away on that dreaded drive through Dallas and then just months earlier, the assassination of RFK. Generally the Orthodox Church does not approve of "mixed marriages" (interfaith weddings), but it does allow for divorce and remarriage (the papacy and the filoque are not the only two issues of disagreement between Catholics and Orthodox).


The Orthodox Church approach to divorce and remarriage is no different than the Roman Church does, just without the "officialness" of annulments. It always amuses me when Catholics say this about the Orthodox. You can't slap a rubber stamp on a piece of paper and then magically declare that the Roman Church doesn't allow divorce. Also, the Eastern Catholic approach is almost identical to the Orthodox. The Orthodox Church takes a different, and less legalistic, approach to divorce with the priest and bishop being very involved in the process. I am very familiar of the divorce process in the Orthodox Church so it's not like I'm pulling this out of a hat