SAY THE BLACK AND DO THE RED: WHAT DEFORMS THE ORDINARY FORM OF THE MASS--WHAT ARE THE ABUSES? 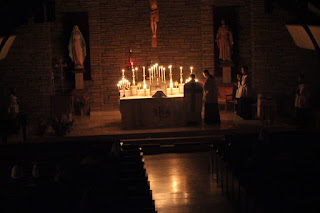 When we look at liturgical disconnect from those who are more orthodox in the Catholic Church, there was a small minority in the 1960's as today, who wanted to discard the reform of the Mass period and keep the status quo of the Mass of the Council of Trent.

But there was a much larger group of orthodox Catholics then and perhaps now, who did not argue with the reforms but accepted these as authoritative and out of respect for an Ecumenical Council and the Magisterium of the pope of the day, being Paul VI. Traditional Catholics always defer to the pope in the areas of faith and morals when his teachings are authoritative and not just an expression of opinion or when these enter into the realm of politics or sciences outside the competency of the papacy.

What were the immediate deformations of the revised Roman Missal of Advent of 1969? And in fact these abuses preceded its promulgation and often occurred in the English/Latin hybrid of the 1965 Roman Missal.

1. Music--the sung Mass faded away and a low Mass with hymns of dubious quality and theology were imposed on the Mass and on congregations--usually sappy folk music. But Protestant hymns with a Protestant ethos and their version of dripping sentimentality was imposed on the liturgy and congregations. Think Amazing Grace, How Great Thou Art and Just A Closer Walk with thee. Apart from the Protestant "total depravity of humans" in Amazing Grace, none of these hymns are theologically problematic but they are a Protestant spirituality with the sentimentality of popular devotions of Protestantism.

2. Priests ad libbing the words of the vernacular Mass and taking liberties which pointed to the priest's haughtiness, elevated his personality and charm and his outright disobedience to local bishops and Pope Paul VI who demanded that priests not change the reformed Mass but to accept it as it was/is.

3. The stripping of the Catholic altar to look like a Protestant Lord's Supper table as well as the iconoclasm of historic and not so historic churches and new architecture devoid of Catholic sensibilities as it concerns devotional artwork.

4. The total neglect of Latin which Sacrosanctum Concilium expected to be preserved and  all Ordinary Form Missals since 1969 have a complete Latin Version which is the official template for any and all vernacular versions.

5. The limiting or forbidding by bishops of some legitimate options allowed in the General Instruction  of the Roman Missal such as Intinction, kneeling for Holy Communion and ad orientem. And the promotion of limited permission for other things, such as a hoard of Extraordinary Ministers of Holy Communion because of use of the common chalice, with its possibility of spreading contagious disease such as Hepatitis, herpes and other infections and viruses.

6. Turning Catholic ritual which is formal into an informal act lacking attention to detail and a lack of care of vestments, altar clothes and the like.

5. The emphasis on the priest due to his ad libbing, funny antics and affective friendliness.

You name other abuses not related to saying the black and doing the red.
Posted by Fr. Allan J. McDonald at Thursday, August 24, 2017

Sorry Fr M, the problem stems from the idea of active participation, an idea already foisted upon Pius X by the Liturgical Movement, the gang of liturgical "experts" who considered themselves above everyone else in their expertise, even the popes. Even Pope Francis made mention of this ivory tower gang when telling us that the liturgical reforms are irreversible. This gang continues its pogrom of making an idol the new liturgy as churches become more and more empty.

#3 the protestants Lords supper table: I almost never hear the altar referred to as an altar. It is always called the table of the Lord. At one Mass I finally realized the reason for all of the extraordinary ministers of the Eucharist is partly because it makes the altar look even more like a dinner table. Instead of one Chalice and Ciborium , there are five of each. The altar servers are literally setting a table. The other reason is that all of those EM's receive both species of the Eucharist before the congregation, and that takes away from the fact that the Mass is not valid until "the Priest" consumes the Eucharist. Today it seems validity is achieved when the E. Ministers consume that Eucharist.

Throughout his (Paul VI) entire pontificate, when the Catholic Faith was being attacked worldwide by his own cardinals, bishops and priests the only bishop he publicly corrected was Marcel Lefebvre. That is stunning when you think about it. The entire bishops conference of Canada publicly dissented from his own teachings in Humanae Vitae and he was silent. Paul VI was silent while Cardinal Willebrands destroyed the Faith of an entire nation. But one simple bishop dared to defend the Faith as it had always been taught and he was demonized and excommunicated. Distrusting. The same thing is happening all over with Francis. He is clearly a nasty nasty miserable man who hates the Traditional Catholic Faith and is doing everything he can to destroy what is left. All wasted energy if you ask me. The destruction of the Church over the last 50 years is almost total. We have a Church largely composed of people that don't know or care what the Catholic Church believes or teaches. WHY go to so much trouble to publicly state unrepentant adulterers can go to communion. They are going to communion and could care less what the Church teaches. Open your eyes Francis is evil, he hates the Church. It doesn't take a rocket scientist to figure it out.

'The modern priest, lacking genuine liturgical knowledge, fills the bareness of the altar by putting on it anything that comes to mind; and what comes to mind are the accessories of the modern living room ... The arrangement of the modern altar displays the ideas of a middle-class hostess of what is appropriate to decorate a dinner table: some candles and a bowl of flowers.'

This aptly describes the altar upon which Pope Francis offers his daily Mass.