SHE REALLY BELIEVED SHE WAS A CATHOLIC PRIESTESS AND WHEN SHE ATTENDED MY FORMER PARISH IN MACON, SHE WOULD CONCELEBRATE THE MASS FROM HER PEW WITH HER OWN BREAD AND WINE, WEARING ALB AND CHASUABLE, USUALLY THE WRONG COLOR, WHICH DROVE ME CRAZY,--GOD BLESS HER AND ETERNAL REST GRANT UNTO HER! MAY SHE REST IN PEACE

She was quite convincing and many in the Macon area thought she was a Catholic priestess (the Protestants that is). She had a TV show on a local cable network, was featured in the newspaper and tried to organize mega ecumenical events--which came to nothing. She was convincing to many Protestants because sometimes fundamentalists can't tell the difference between delusions and spirituality/piety.

She was also arrested several years ago in California for trying to board Air Force 1 while President Obama was on it! 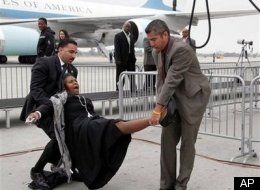 This is her obituary in this morning's Macon Telegraph which includes the large heading:

Priestess Brenda Slater Lee
July 1, 1950 - July 30, 2017
Macon , GA - Priestess Reverend Brenda Willis Slater-Lee was born July 1, 1950, to the late Willie M. Willis and Mrs. Agnes Willis of Savannah, Georgia. After her mother married James B. Slater, she moved with her siblings to Macon, Georgia. She attended Unionville Elementary School where Mrs. Rosetta Smith, her music teacher, discovered she could sing. Brenda sang "You'll Never Walk Alone" at the school's graduation. Upon their arrival to Macon, her parents' neighbor, Mrs. Malinda Styles, invited them to Beulah Missionary Baptist Church where the late Reverend Benjamin Johnson was the pastor upon their arrival to Macon; however, the foundation for Brenda's spiritual walk with GOD began at the age of six at Beulah Missionary Baptist Church. She attended and graduated from Ballard-Hudson in 1968 and entered Macon Junior College.

After graduation, Brenda moved to Los Altos, California where she continued her education at Foothill College Associate Degree-Art and Bachelor of Arts-Music. Brenda became the first Georgian to enter a work-study program at Stanford Linear Accelerator Center in Stanford, California. She moved to Rome, Italy and studied at The Pontifical Institute of Sacred Music and performed as a soloist at The Church of Santa Susanna for six years. The highlight of her singing career was performing for Pope John Paul II at The Church of Santa Susanna and being the first American woman to sing inside the Vatican. Mr. and Mrs. Lee established residence in Fullerton, California upon their return to the United States. On June 22, 1988, they became the proud parents of Hillicia Lee.

Because Brenda was unorthodox in many areas of her life, controversy often found her. In Brenda's lifetime, she made three visitations to Heaven. On August 14, 2000, she passed a polygraph given by Keystone Intelligence Network of Philadelphia supporting this claim.

Brenda gave to children and senior citizens unselfishly in every community she lived in.

She led and participated in ecumenical services in Macon, Rome, Italy, Dundee, Scotland.

May the angels lead her into paradise.

Why is it that women are more prone to religious dementia than are men?