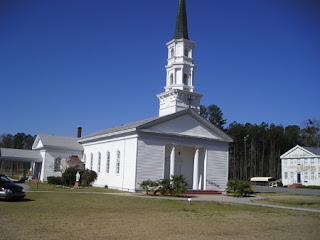 I have been a priest for 37 years. For 36 of those years I have been assigned to parishes where the doors of the church were unlocked for most of the day, usually during office hours. Keep in mind that 32 of those years were in parishes in the center of  downtown.

Then last year I was moved to a suburban parish 20 miles south of downtown Savannah in Richmond Hill. We have a large new church and a smaller original church (built by Henry Ford as a Congregationalist church and named for his mother and mother-in-law, Martha and Mary) and both of these are locked unless Mass is being offered.

But no more! Today (Monday, the Vigil of the Assumption) our Martha and Mary Chapel will remain unlocked for personal prayer and meditation Monday through Friday during our office hours.

I indicated to our parishioners that the opened chapel is not just for us, but for the community to use for private prayer and that they should invite them to consider using the chapel when they would like as a place to pray.

In all my other parishes, especially the downtown ones, all kinds of people, not just Catholics, came to pray in our church. In fact I remember vividly in my downtown parish in Augusta on 9/11 all kinds of people coming to Most Holy Trinity to pray because those downtown, Catholic or not, knew the Catholic Church was open for prayer. And we had all kinds of downtown Protestants coming to our 12:15 PM daily Mass on 9/11, so much so, that the church that seats almost 800 was full!

This all leads me to the "new evangelization" of recent popes as well as Pope Francis' take on it. His Holiness is calling the Church (all of us, not just the clergy and religious) away from "maintenance " to new methods of reaching out especially to those on the "periphery" or to Catholics who feel excluded.

Usually, though, this is a call to historically predominantly Catholic countries/communities who took it for granted that the majority of people in their locale were Catholic and 95% of them engaged in the Church on some sort of level, even if superficial. There wasn't as need to reach out unless they sent missionaries to places where there was a need to "plant" the Catholic Church.

This is no longer the case in those areas as today as only 12% might be engaged on some sort of level.

But here in the south, like the Diocese of Savannah, Catholics have always been a minority and we all have been challenged and marginalized by the predominantly non-Catholic culture

We are also more aware to use some of the methods of our Protestant brothers and sisters to be more welcoming of those who don't "belong" to us. We don't want to proselytize as the Fundamentalists do, but we can borrow much from the Protestants that are congruent with our theology and style!

But back to the unlocked church. Isn't having an open church where anyone without being approached by someone in the church to join, can come in for peace, quiet, prayer, contemplation and adoration,  a good way to reach out not only to practicing Catholics but those Catholics on the fringe and to non Catholics? Isn't an unlocked church a ministry of evangelization in and of itself?

Maybe it is time you began defending the Catholic Priest.

Glad to hear of the chapel open but unfortunately keeping sanctuaries open, or at least not under surveillance, isn't an option in some areas. For example, at Atlanta's Shrine of the Immaculate Conception by the Capitol, in the past it has locked its doors except during Masses because homeless people might come in and sleep in the pews. Even in ritzy Buckhead, I noticed one time at Evensong at the Episcopal Cathedral of St. Philip one of those circular-looking cameras above the bishop's throne---who knows, someone might try to steal the altar candles or hymnals in the pews. And a few years ago at your Cathedral of St. John the Bapitst, someone set the pulpit on fire. I have never been to your parish but I get the feeling it is in a pretty safe suburban area.

Obviously, an accessible church is the ideal for the faithful so long as it's not at the expense of common sense. If your chapel is isolated from parish activity, you may want to consider security measures of some sort to mitigate the risk of an unsavory person having extended solitary access.

Maybe put a pass code on the door lock for the parishioners.