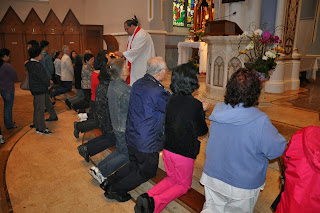 As everyone knows I appreciate the Extraordinary Form of the Mass but precisely as extraordinary. It is wonderful to have it as an option for people to experience in it what has never changed over the centuries of the Church including to this day with the Ordinary Form: the Real Presence of Jesus Christ, His redeeming sacrificial offering to His Heavenly Father and the Father's acceptance of His act of love in the Sacrifice of the Cross for our redemption. The Father return the Son and His offering to us for our salvation and nourishment as we make our pilgrimage to heaven.

Every Mass, no matter the form, also calls us to live our Faith and Morals in the world and to show love and compassion to everyone especially the poor.

As children most of us are like the anaweem. We must rely upon everyone else for our survival and we accept everything at face value. I can remember as a young child what my impressions were of the pre-Vatican II Mass and what struck me the most. I certainly did not understand the theological or doctrinal aspects of the Mass, I understood one thing only: God was present at Mass, He was "up there" at the altar, both during Mass and after Mass in the tabernacle. That captured my spiritual imagination.

My other simple understanding of the Mass was based upon what I witnessed in the congregation and the different levels of piety. At times I found the Mass boring until the bells. The bells raised my awareness that God was up there.

I remember people going to the altar railing, but one thing that struck me the most was the choir coming down from the choir loft and people going to the altar railing as the priest was receiving his Holy Communion. People would be standing in the aisle while others were kneeling at the railing and everyone else kneeling in their pews. Then the priest would turn for the Ecce Agnus Dei and the people's response and everyone standing in the aisle would fall to their knees on the hard floor. I knew that Someone important was there for people to do that.

I was also fascinated by how people acted after receiving Holy Communion and how they buried their heads and faces in their hands or laid their head on the pew in front of them as they knelt.

Our family went primarily to the Low Sunday Mass, so music doesn't really stand out in my mind. We did go on important feasts to a High Mass, but my father preferred the Low Mass. He preferred simplicity.

I wonder what people who are adults now remember about the Mass of the post-Vatican II Church as children, and by that I mean 4 years of age to about second grade. What were your first impressions and what captured your religious imagination?

And of course the dinosaurs out there who remember the pre-Vatican II Mass as a young child also should offer their initial understanding of the Mass especially prior to their First Holy Communion.

The thing I miss most was kneeling for Holy Communion at the altar rail. I loved that because it was reverent and orderly, and quiet and easier. You had time time pray a little while waiting for the priest and you had time to stay kneeling for a little bit after receiving. It was unhurried, and peaceful. Oh and I miss only having priests give out communion. It was a big mistake allowing lay people to give out Holy Communion. I think this contributed to the mass denial in the Real Presence.

And other things I miss:
The Latin
The hymns
Nuns in habits
The general propriety of the whole celebration
Women in chapel veils, men in ties
All the statues and candles
You felt "Catholic" and it's hard to feel that seated amidst a bunch of people in tee shirts and flip flops checking their IPhones all the time.
But mostly the blessed quiet. I think I miss the quiet more than kneeling for communion. Why can't people talk outside? I don't understand that

I was in 4th grade I think when Father came by our class to show us how to receive the Eucharist in the hand. The Communion bread was the thick, crumbly kind, but I don't remember anyone worrying that crumbs of Jesus was end up on the floor. That is, by far, the thing that worries me the most from those years: how many time did I unintentionally drop Jesus on the floor and possibly even step on Him (!).

I don't want to be totally down in the time. Jesus DID call us friends, so there is nothing wrong with saying that. But there's something wrong with saying ONLY that He is our friend. I suppose our teachers all had the Baltimore Catechism and felt like the friend aspect wasn't emphasized enough, so we got felt banners and butterflies. But we never got the Baltimore Catechism, so we didn't get the full picture either.

The Church is both-and. I don't know if things are more comprehensive today.

I remember Father Kenneley at Holy Spirit-Macon in the old church. around 1977. The hard metal fold out chairs with the fold down kneelers. The song books that was mimeograph sheets in a plain drab gray paper folder. I remember "It Only takes a Spark to Get a Fire Going." We must have sang that song every Sunday. And putting the communion wafer in the bowl when you walked in the door. And doughnuts after Mass in the same room where we just had Mass.

Jesus as friend almost always degenerates into bad theology. It invariably ends up in either maudlin, sentimental immediacy among the faithful and into a liberal theology of "feelings of absolute dependence" and various inner epiphanies that have nothing to do with Christology, transcendence, or the literally bodily risen Christ who is Really Present in the Holy Eucharist.

Quickness I know what you experienced at Holy Spirit during the time you describe first hand as I was a seminarian at St.Joseph Church the summer of '78, at St. Peter Claver, the summer of '70 and then as a deacon and priest from Jan 1 to August 20 of 1980 at St. Peter Claver. I visited Holy Spirit many times in that period and I filled in for Fr. Kenneally for one month while he went to Ireland in July of 1980! And the song, "It only takes a part" was a big part of the folk tradition of music there and here at St. Joseph and St. Peter Claver. I hadn't thought of that song but as soon as I saw the title, the melody came back to me and i can't get it out of my head now, like a migraine! Thanks a lot!

You asked for it.

Post Vatican II person here, from my own blog, I have a brief memory of Mass as a child

Many of us have experienced Liturgies that were "lacking" (and that's being rather kind). Between inviting all of us to the altar, surrounding priests for the Consecration, to "altar calls" with some subjective, how has the Lord affected my life that sounded like it came straight out of a self help book, to the Pouring of Jesus after the Consecration, and added on top of an attempted Catholic attempt at rock music which sounded as pathetic as the modern Justin Bieber, but didn't quite get that low.

^^ those things happened at my parish before I became Liturgically educated

I only have very vague recollections of pre-Vatican II. I remember going to Mass every morning before going to class. Each grade at the school would be at Mass. I remember how compared to now there were far fewer who would receive Communion than today. This was due in part to the longer fasts that were required back then. I remember the there was a lot more who availed themselves of Confession on Saturday also. I would rather not try to dwell on Lent. There was a certain attitude and demeanor that everyone had. At Mass there was no nonsense. Everyone was focused on what was happening on the altar even if you did not know or understand the theology of it all. I could not say enough good things about the nuns we had as teachers.

I made my first Holy Communion in 1958, aged seven, was confirmed in the same year and served my first Mass in the following year. We knew the catechism and certainly knew what the Mass was about.

Not long ago a London priest commented on the pupils' reactions on first receiving Holy Communion, as published in the school magazine. One boy wrote (and he was not untypical): 'We all went up for the bread and wine. It was great fun'.

Just about sums it up.