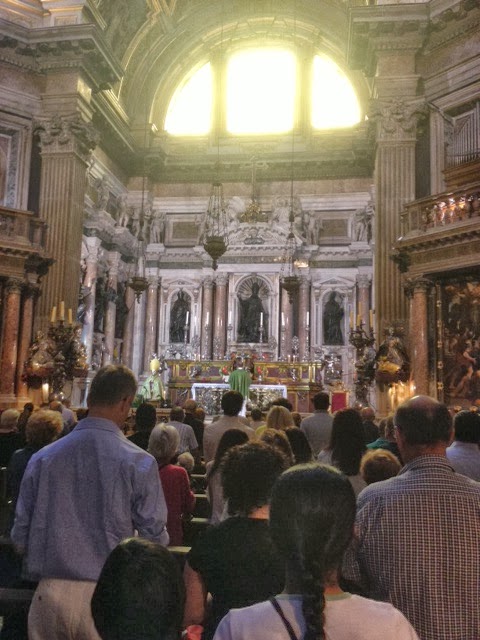 Msgr. Bruce Harbert writes the following; who knew? It may be helpful to recall that the prayer beginning ‘With humble spirit . . . ‘ is an allusion to Daniel 3, 39-40, part of the ‘Song of the three holy children’, which is used in Morning Prayer on Sundays and on Tuesday of the fourth week of the Liturgy of the hours.
The situation is this: three Jewish lads have been thrown by Nebuchadnezzar, king of Babylon, into a furnace for failing to obey him. They are far from Jerusalem, and so cannot offer sacrifice in the temple. Moreover, they have no rams, bulls or lambs to offer. so one of them, Azariah, prays that, in place of a normal sacrifice, God will accept them themselves. The whole passage is well worth reading.
On the lips of the celebrant of a Christian Eucharist, then, Azariah’s prayer indicates that he is offering himself along with bread and wine.
The people too offer the sacrifice of themselves, and each person’s sacrifice is different : one has been working hard, another bearing sickness, another looking after children and so on ad infinitum. That is why he speaks of ‘my sacrifice and yours’.
In their reply, they speak of ‘the sacrifice’ in the singular because, as VII said in Presbyterorum Ordinis 2 (also worth a read) ‘by the ministry of presbyters, the spiritual sacrifice of the faithful is completed in union with the sacrifice of Christ, the one Mediator’. That is, at Mass all our sacrifices become one.
Posted by Fr. Allan J. McDonald at Monday, February 17, 2014

The "in spiritu humilitatis" and the "Orate Fratres" were reinserted by Paul VI between 1967 and 1969. The Consilium did not want any Offertory prayers apart from the Oratio super Oblata (formerly the Secret) since they argued (correctly) that these prayers were only inserted in the second millennium as the private prayers of the priest.

However, an examination of older Rites shows that the important prayer of the Offertory is the "Suscipe Sancta Trinitas". In the Tridentine Rite it is almost an afterthought, coming as it does between the Lavabo and the Orate Fratres, but in the Dominican Rite it is used for the (simultaneous) offering of Host and Chalice. The offering of the oblations to the triune Godhead is very significant. If only one prayer is inserted into the Offertory it must be this one, and I would encourage all priests to use it (dicens secreto) when celebrating in the Ordinary Form.

"I would encourage all priests to use it (dicens secreto) when celebrating in the Ordinary Form."

Is there any (rubrical) reason why the celebrating priest could not or should not offer silently his personal private prayers (such as the Suscipe Sancta Trinitas") for his efficacious offering of the holy sacrifice. I certainly think that every lay worshipers should offer his own private prayer for the efficacy of the sacrifice (and have these offertory prayers inserted in the hand missal I carry to OF Mass). Is less to be expected of priests?

The "Suscipe" is not a part of the prayers for the Ordinary Form as given in the Roman Missal.

That's a good question. While ad libbing to the congregation seems to be widely practiced by clergy of every rank, and even expected among the faithful, the "freedom of prayer" John Nolan proposes would not go over very well.

Practically speaking, recitation of the obligatory O.F. offertory prayers would make the addition of the traditional ones very difficult to manage.

Personally, I think if we can ever get back ad orientem for the Canon and kneeling for Communion, the O.F. will be fine as it is. There's no need for the endless changes that should really only occur gradually over the centuries. I worry that constant discussion of such relatively minor changes could harm the sense of mystery that should accompany the rite of Mass. We shouldn't feel we're "in control" of liturgical rites.

JBS, but the post-Vat II crowd does feel that they are in control of liturgical rites. I watch Priests ad lib at nearly every Mass I attend outside St. Jo's.

One thing I think is worth noting here is that the average priest rarely experiences another priest celebrating Mass. Therefore, I suspect some of the bewilderment priests express concerning the E.F. crowd stems from a lack of experiential awareness of the lamented over-individualization of the rites by celebrants. Out of habit, we priests even lose sight of our own liturgical eccentricities. A priest ordained in the Sixties, for example, may have never participated in an O.F. Mass offered by anyone other than himself and his bishop.

I wonder how the psychology of the priests involved would affect this interaction? Are they trained to seek improved Litugical expressions? Considering the significant appeal of cleric centered services which sort of expression would they chose. Finally, I think the vector for much of the Liturgical abuse has been the lay Litugical experts used as resources for guidance on this issue. That group would seem to be the best focus of efforts reform of the reform.

JBS - It can be very helpful to make a video recording of oneself celebrating mass and then, watch it. It can also be a bit unnerving!

This can be helpful in training lectors as well. They get to hear themselves, see their plusses and minuses.

"O, wad some Power the giftie gie us, To see oursels as others see us!"

PI, I don't think you'll encounter a Lector outside a seminary! The problem with a lot of lay readers is that they try too hard and sound mannered. I remember a man who enunciated every vowel and consonant, so "Christian" came out as "Chris-ti-an", and a woman who paused for five seconds at the end of every sentence.

JBS
I take your point, but these "private prayers" were used before they entered the Missal, and a comparison of different Uses shows considerable variation. In the OF the congregation would probably not notice if the priest prayed the Suscipe before the Orate Fratres. As more and more priests use both forms, they are increasingly likely to compensate for the impoverishment of the newer form. Don't forget the original aim of the reformers was to do away with the Offertory Rite altogether.

To be fair to the OF, it does make clear the offering of bread and wine, but I'd love to see the old offertory prayers return.