THE SEASON OF SEPTUAGESIMA (FEBRUARY 16-MARCH 4) BEGINS TODAY NOT ONLY FOR THE EF CALENDAR BUT ALSO FOR THE ANGLICAN ORDINARIATE CALENDAR! 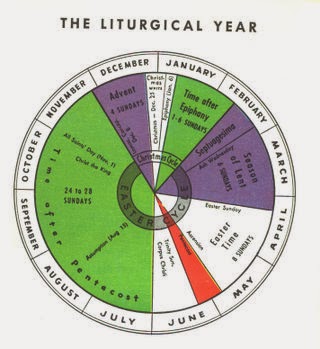 Why or why are the former Anglicans who have come into the full communion of the Holy Roman Catholic Church given more of the good stuff than us cradle Catholics of the Ordinary Form of the Latin Rite? Why or why? Their revised Roman Calendar which I print below has all the good stuff of the Extraordinary Form Roman Calendar but calibrated to our 3 year revised lectionary.

In other words, the lectionary for the Sundays of Septuagesima is exactly as the one we use these next three Sundays and weeks, not to mention the orations of the Roman Missal and prefaces. The Magisterium has simply allowed the Anglican Ordinariate to call these Sundays by  the traditional name that was swiped from us in the Ordinary Form and for no apparent good reason!

Here's their calendar but still using our 3 year lectionary and the normal Roman Missal that we all use in the Ordinary Form:

The date of Easter being moveable, Sundays marked * are not needed in every annual cycle.

The Octave Day of Christmas:

Solemnity of Mary, the Holy Mother of God
*Second Sunday after Christmas

The Epiphany of the Lord (The Manifestation of Christ to the Gentiles)
(January 6, or the Sunday between January 2 and 8)
The Baptism of the Lord
(Sunday after Epiphany, or on Monday, January 8 or 9)

Ascension of the Lord (Sunday 7 of Eastertide)
Pentecost(Whit-Sunday)

The ancient Octave of Pentecost began with Whit-Sunday and continued until Trinity
Sunday. For the midweek ferias following Pentecost the weekday lectionary is used, as
prescribed for Ordinary Time, but the mass propers and red as the liturgical colour may
sustain the themes of Pentecost.

This begins on Monday of the week following
Trinity.

For the purposes of the Roman Lectionary, the numbering of Sundays
(Sunday 8, 9, 10, 11, 12) resumes either on the First Sunday after
Pentecost or on the first Sunday thereafter on which a solemnity is not
celebrated. Sunday numbers remain in sequence until Sunday 33. Sunday 34 is Christ the
King and Week 34 the final six days of the liturgical year.

Last Sunday of the Church Year:

Solemnity of Our Lord Jesus Christ, King of the Universe

The propers of the Sunday next before Advent are used during the final week of the
liturgical year, Week 34.

There are clear analogies between the Byzantine rite and the Extraordinary form of the Roman Rite, analogies that are still easy to see in the Anglican Ordinariate Use.

However, the best stuff I ever found on Septuagesima is in Pius Parsch's The Church's Year of Grace, Volume II. IT would be nice if you shared some of that with your readers, especially the wonderful Beuronese illustrations. And of course, give us your Father McDonald comm4ntary on the old collect of Septuagesima! So, there is a friendly challenge!

The collect, secret, and postcommunion prayers for Septuagesima in the 1962 missal are word-for-Latin-word identical with those in the Gregorian sacramentary prepared under Charlemagne twelve hundred years ago. See page 25 of the online version

Indeed, these orations are thought to have already been several centuries old at the time of Charlemagne. Of course, these pearls of Christian antiquity disappeared in the revision of Paul VI.

I have just returned from a sung Mass for Septuagesima. The Introit begins "Circumdederunt me gemitus mortis, dolores inferni circumdederunt me", and despite the fact that this ends on a note of hope, it was regarded as too strong meat for a Sunday and so was shuttled off to a weekday in Lent where few people will hear it. The Tract "De profundis" was likewise shuttled off to the Missa pro Defunctis as an option.

And this is to presume that the Graduale Propers are used, which in most cases they aren't. If you use the Lectionary Propers you are in an even worse situation. The Lenten Tracts, which give much cause for meditation are substituted by a so-called "Gospel acclamation" which can easily be fitted to the advertising-jingle style of most contemporary Catholic "music".

Imagine a priest in your average British or North American parish beginning the Mass with "The sorrows of death surrounded me and the sorrow of hell encompassed me". Father, that's not NICE! We come to Mass to feel good about ourselves! Sorry, the whole Bugnini edifice needs a wrecking-ball taken to it, just as Annibale took a wrecking-ball to the Roman Rite. And Annibale was the monkey; the organ-grinder was Paul VI. It's on days like this that I have to reconsider my tolerance for the Novus Ordo which I attend (albeit in Latin and done decently) two weeks out of four.

"Any comment that is vitriolic and disrespectful of the laity in general, and Pope Francis, bishops and priests in particular will no longer be tolerated and will not be posted!"

Yet: "And Annibale was the monkey; the organ-grinder was Paul VI."

The FARCE continues. Only in a seriously off-kilter mind is this not a disrespectful comment.

Anonymous, whoever you are:

If you really want a 'disrespectful' comment, I am quite happy to fire one off in your direction, but I am minded of what that great Catholic poet, Alexander Pope, wrote:

"Satire or sense, alas! can Sporus feel?
Who breaks a butterfly upon a wheel?"

Anonymous, you sound like some kind of deranged parrot…LOL!

Did he have a laissonse for the chimpanzee minky?

I wonder if the Anonymous at 7:23 PM is the same who wrote the following little gem on Fr's Feb 11 post:

Good to see you are smelling like those sheep. And you only had one European vacation last year. This year take 2 or 3. I'm off to work and will probably work straight through the storm but I'll make sure I put more money in the collection basket because you shouldn't have to associate with the plebeians.

If not, oh well. But if he be the same, the farce does indeed continue. Hahaha...

It would be very funny if the spiritual children of Henry VIII saved the Roman rite of Mass!

Whenever someone proposes a "reform of the reform", I try to discern whether he's concerned with reverence or with aesthetics. Suggesting change to the seasonal calendar seems to have more to do with catechesis, which is yet another motivating factor.

My view is that catechesis is for the classroom, aesthetics is for art museums, but reverence is for the sacred liturgy. Reverence, therefore, seems to me to remain a reasonable cause for a "reform of the reform".

I think that the current Ordinary form Missal can be celebrated very reverently without major changes but by simply chanting the propers and choreographing the Mass in an EF sort of way. The real problem with the OF Mass apart from banal or inappropriate music is the time of Holy Communion. Reducing the chaos of EM's sometimes in appropriately dressed for this liturgical ministry and many times I'll chosen in terms of Eucharistic belief, piety, and spirituality would help. However simply restoring kneeling for Holy Communion would solve so many problems do reverence even in the most banal celebrations.
At this time I think my recommendation is falling on deaf ears at the Vatican and here at home.
But I do think the Anglican Ordinariate Mass options have to be made available to the rest of us; it is only logical and charitable! I predict this will happen!

Indeed. And, therefore, is not continued talk of OF missal details just irrelevant chatter, when the real problem is not with our missal, but with our priests and bishops?