WJBF-TV ABC 6 Augusta-Aiken News, Weather, Sports
I returned to my parish in Macon, Georgia yesterday afternoon. Macon only received a light dusting of ice that brought down a few trees but the ice disappeared quickly.

Not so Augusta, my home town where my sister lives and I still maintain my mother's townhouse (for days off, vacation and retirement, but I digress). The ice storm there was and is truly iceageddon. My sister tells me that trees are down all over the city bringing with them power lives and a significant part of the metro Augusta area has been without electricity going on for three days now. Georgia Power and crews from Florida are working feverishly to restore power.

A day or so before the latest ice storm it was the same in the low to upper 70's.

But if snowquakes and icequakes aren't enough, metro Augusta was hit with an earthquake, yes, an earthquake a little after 10:00 PM last night! The media is reporting that it was felt as far away as Atlanta, but evidently not here since it didn't wake me from a sound sleep. But what would?

There is some concern for a man-made dam west of Augusta that is on the Savannah River. If that dam fails and the huge man made lake, and I mean huge, floods the Savannah River downstream where Augusta is, it will be a national tragedy to say the least!


When the ground started shaking Friday night, Sandy Quarles thought it was the old oak tree tumbling over in the front yard of her Edgefield home. 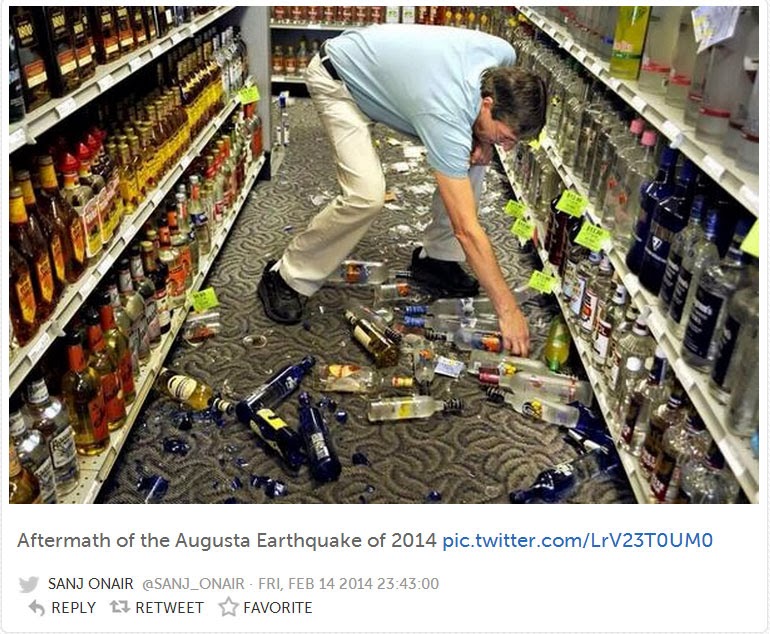 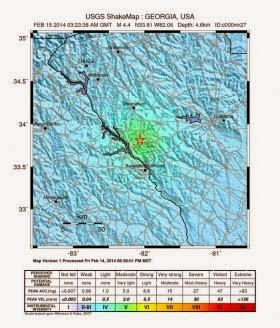 She was one of thousands of residents – from Thomson to Aiken to Fort Gordon to downtown Augusta – asking the same question: Did we just have an earthquake?
Yes, we did.

About 10:23 p.m., an earth­quake centered 12 kilometers west-northwest of Edgefield, with a preliminary magnitude of 4.1, shook an Augusta area still recuperating from a major ice storm, according to the U.S. Geological Survey Web site. Many people, still hunkered down without power, went outside to see what new calamity had befallen them.

“We were asleep before we heard what sounded like a loud explosion,” Quarles said. “All the windows started to shake and we thought that old oak tree had fallen over. I’ve never felt anything like that before.”

The earthquake was felt as far away as Athens, Ga.; Atlanta; Spartanburg, S.C.; Columbia; and Charlotte, N.C.

There were no reports of damage. A spokesman for the Georgia Emergency Management Agency said such a quake would wake people, shake dishes, maybe knock a painting off a wall, but wouldn’t cause structural damage.

Pam Tucker, Columbia County’s emergency management director, said she had contacted control room operators at Thurmond Dam and Hartwell Dam and there were no initial reports of damage. Personnel had been called in to do more detailed inspections.

Mie Lucas, the disaster preparedness coordinator for Richmond County, said no damage had been reported.

According to the U.S. Geological Survey, the largest quake felt in the area was a recorded 4.5 that took place March 5, 1916. Located 30 miles southwest of Atlanta, it was felt across an area of 5,000 miles.

The largest recent quake in the lake area occurred in Lincoln County on Aug. 2, 1974, and registered 4.2, according to Augusta Chronicle archives.

I spent the first 45 years of my life in California and, while I got used to the feeling of small earthquakes, I never got used to the uneasy shaking of the few large ones I've experienced. Earthquakes should be taken seriously, and they can happen ANYWHERE, not just on the west coast. Charleston S.C. had a disastrous earthquake over a century ago and they are overdue for another one--and given the increase in population and structures--structures probably not adapted--it could be catastrophic.

I am in Lithia Springs,Ga my daughter snd I felt the house shake around 12:55pm today coming from the ground even neighbors felt the vibration it was pretty strong.