HERE'S THE ANTI-CHRIST AGENDA OF THE ENGINEERS OF SOCIAL CHANGE

At the end of this post is a short video clip of Frontline's "Secrets of the Vatican" expose. It will show clearly the agenda of the news and entertainment conglomerate, not to assist the Church in cleaning up immorality, but rather to undercut the Church's teaching on sexual immorality and push the agenda to make moral the immoral lives of the priests showcased in secret so they can become role models for the world and thus promote the homosexual lobby's worldwide agenda. 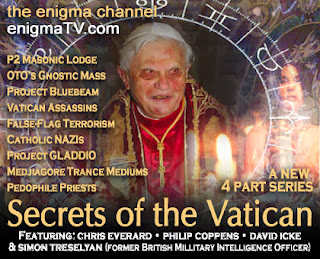 So much of the social change in our culture, some good, some bad has been engineered by the social media, especially those who control the news and entertainment of the world. This conglomerate is powerful and they know it.

Their power for good can be immense. Their power for evil is even more immense when their agenda opposes the truths of God in the moral realm or there is a cafeteria picking and choosing of what moral agenda they will push. Often times to undercut the opposition to their agenda, they will denigrate those who uphold and teach the opposing view.

And thus it is with the Church, the Holy Catholic Church. The Catholic Church's Head, Jesus Christ, opposes some, not all, of the agenda of this huge worldwide conglomerate that is the news and entertainment multi-national. And worldly they are.

In the clip from Frontline's Ambush Entertainment Show, Secrets of the Vatican, you can see the agenda at work.

At first, you would think that this clip is decrying the moral corruptness of the priests, bishops and cardinals for not living up to what they are vowed or promised to do in the area of celibate chastity--that there is shock and disgust at those who allegedly (with evidence that would not hold up in a court of law because it is hearsay and those who testify are not balanced with those who are morally upright); but no, the moral outrage is that the Church has moral teachings that prevent the immoral priests from living their lives openly and being a role model for others to do so also.

And that's the agenda! PBS's Frontline could care less if all of this immorality were to be approved by the  Church. That homosexual priests could be as promiscuous and corrupt as they please if they could do it openly and without guilt or repercussions. They want the immoral to become moral and to be a role model for others. That is what I glean from this video clip. That's the agenda folks!

Unlike the homosexual lobby in the news and media conglomerate who is pushing their agenda for the acceptance of a lifestyle that is in direct opposition to the teachings of Almighty God, Father, Son and Holy Spirit, and thus anti-Chirst, there is no lobby of adulterers or adulteresses promoting a similar agenda, at least for now.

If they did and those denominations that do not allow their married clergy to be adulterers, could we see a similar piece from Frontline showing moral outrage at those married clergy who uphold fidelity in marriage, yet they themselves live secret lives of adultery. Wouldn't it be better to simply accept adultery and allow them to live it openly and be a role model for others in this regard?

FR, I think you nailed it.

Father I agree with you about the media. However, the complete and total refusal on the part of bishops and popes for the last 50 years to correct and stop heresy and immorality in the clergy and religious orders worldwide has contributed to the media attacks.

Why did Pope Paul VI at the Consistory of Cardinals in 1976 think it so important to condem publicly Archbishop Lefebvre yet remained silent while his own Cardinals were publicly undermining the Faith, and him personally, thought the world. Paul never condemned the bishops of the Netherlands, Belgium and Germany who publicly denied the truths of the Faith, something Lefebvre never did.

I'm not trying to defend disobedience on either side. I am not saying Lefebvre was correct to defy the Pope and consecrate those bishops. But my point is why is it always "traditional" Catholics who are always vilified. Yet liberal, immoral bishops were given free reign. Immorality in the clergy was ignored or encouraged. Look at the Archdiocese of Miami as an example.

Those bishops who looked the other way when immoral priests committed evil would not tolerate for one second a priest who refused communion to practicing lesbians.

I can understand the hatred the media has for the Church and her teachings but I cannot understand bishops and priests who join that chorus.

"I cannot understand bishops and priests who join that chorus."

Are you saying that you don't understand that there are bishops and priests who are part of the problem and not its solution?