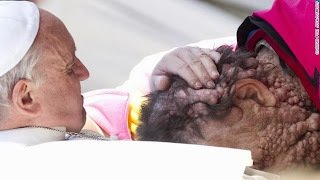 CNN has an article by a San Francisco neo-Catholic, post-Catholic actually. YOU CAN READ HIS ARTICLE HERE.

He hit the crisis in our pagan culture right on the head of the nail. He laments that women cannot become catholic priestesses. Yes, we need to use the word priestess not only to give the word the proper feminine description, but to underscore the paganism of it when applied to a Catholic woman desiring ordination and her male enablers--it is pagan syncretism, the smoke of Satan.

He decries that his gay son and lovers can't have a recognized Sacramental marriage in the Church and how this further wounds his son who wants the Church to love not only him, as she certainly does, but also love his sexual perversions and sins, which is outside God's perfection and holiness to which, she the Church is called. Paganism as it concerns sex, as old as the hills, cannot be mixed with legitimate Catholicism! That would make Holy Mother Church an adulteress unfaithful to her Bridegroom and Spouse, Jesus Christ! It ain't goin to happen except in post catholic neo-catholicism.

On top of this, this father who is his son's enabler and one of scores of catholic pagan enablers in the Church wants to rewrite Scripture, Tradition and natural law to reflect pagan sensibilities. Sex should only be evaluated as to how the partners, one or the multitudes like it, not how it affects God!

There you have it! Paganized Catholics wanting to manipulate as many Catholics as possible to become pagan catholics even the pope.

It isn't going to happen and catholic converts to paganism and hedonism need to know this up front and cease their hypocrisy of calling themselves Catholic when they have become self-serving pagans of "me-ism.

Are you absolutely certain, Father, that it is a sin to shoot people like this?

Well we have a pope who refuses to wear a mozetta but has no problem wearing a clown nose, so anything is apparently possible.

Very well put, Father. I know so many Catholics like this and, unfortunately, I used to be among their ranks many years ago until Truth in the form of the Church smacked me in the face. Thank you for your intelligent words,but most importantly, for your worthy vocation.

Yesterday, I had the privilege of traveling with my students from the St. Joseph, Waycross, Confirmation class to Sacred Heart Church in Warner Robins, Ga. for a Confirmation retreat with other children from around the Diocese.

I had never been to Sacred Heart and it was interesting to see that they had three successive church buildings on their large church/school property. The first church was built in 1945, the second in 1961 (the year I was born) and the third in 2007. The first church was a very nice little red brick church with Gothic doors with wrought iron hinges, wood cased Romanesque windows and small butresses with capstones. It had what appeared to be a little rectory apartment as a part of its back wing. It is a quaint, neat little church with lots of character and it LOOKS like a Catholic church. Sadly, as I peered into one of the replaced window panes I could see that the altar and rail are long gone. It appears to see some use as a meeting space but its roof and casement windows are sorely in need of attention.

The second church, built in 1961, though bigger, is a very uninteresting minimalist low roof, blonde brick building, typical of that period built right in front of the neat little 1945 church. What an unfortunate difference about 15 years made in architectural styles! I'll confess, in terms of the styles of things we use and wear in this temporal world, I would be much happier if we could have stopped the clock in about 1945 to 1950! And while it is wonderful for a parish to grow, it is still sad to think that the little brick 1945 church was superseded by this plain structure in just 16 years!

The third church, built in 2007, is a very large and spacious building (it has a very large narthex) and it has some very nice features such as stained glass windows (nearing completion but still collecting funds to finish) and some elegant brass candlestands. However, I personally did not like the semi-circular seating around an oval-shaped raised wooden sanctuary floor and the fact that the Blessed Sacrament is not in the main church but in a side chapel.

Of the three, the second church (which is my contemporary!) is the one I like least because it is so plain and flat looking with no ornamentation. Thank God that even in modern churches we are beginning to see the recovery of some of the ornamentation that was the norm in the past. It is also interesting to note that this last (2007) church was dedicated (if I remember what I saw) on July 3, 2007--just four days before Summorum Pontificum was promulgated by Benedict XVI. The Church has been changed by that event and I wonder if, had it been built in 2013, the style would have been more traditional!

The parochial vicar, a very new priest named Fr. Kevin O'Keefe, offered the Mass for us. He is a very fine speaker and gave a very good (but not too long!) homily. Typical of many of the younger generation of priests, I was encouraged to see him wearing an amice with his square-necked alb and a beautiful set of green semi-Gothic (pre-VII style!) vestments.
Yes, things are (slowly) getting better every day . . .