POPE FRANCIS ONCE AGAIN SAYS ABOUT THE ORDINARY FORM OF THE MASS, "IT IS TRUE THAT WE HAVE LOST THE ASPECT OF ADORATION DURING MASS WHICH IS SO NECESSARY!" 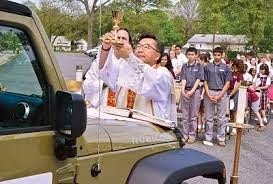 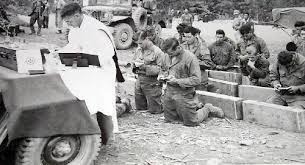 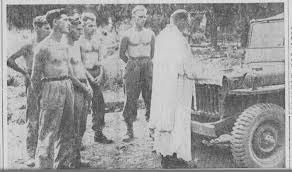 You can listen to Pope Francis words in Italian and the English summary of Pope Francis homily today at the Chapel of His Holiness residence at the Vatican Motel 6 by PRESSING HERE! The only problem with the English translation is that it is not faithful to the Italian Pope Francis uses where he explicit acknowledges that the Mass today has lost it focus on adoration of our God in Jesus Christ.

Pope Francis stated that we must recover the mystery of adoration in our Mass and in our liturgies in our "temples" the Church and the temple of our heart, our inner being of the soul.

But how in the world do we do this? It is quite easy and the Holy Father, Pope Francis has modeled this for us as did Pope Benedict, by celebrating the Mass facing The Lord, facing God, ad orientem as Pope Francis has done in the photo at the top of my blog.

It doesn't hinge on elaborate ceremony or vestments, as much as these could contribute to the sense of mystery and adoration, it hinges on the direction of prayer and the way the priest faces, no matter how humble the circumstance of the Mass and the nature of the altar that must be chosen in extreme circumstances as in the war photos of Mass on a Jeep's hood! Even a Mass with simple vestments and no music, a low Mass, celebrated ad orientem will be a powerful sign and experience of adoration that our Holy Father says in lacking in today's liturgies and churches!

The reason we have definitely lost the mystery of adoration in our Mass is very simple to diagnose! We can lay blame not only on the committee Pope Paul VI formed to fabricate a newly constructed Mass but on subsequent liturgists in the 1970's and 80's, who hijacked the renewal of the Mass along these fabricated lines which eventually influenced the iconoclasm of not only the liturgy but of church architecture.

According to Jung's theory of psychological types and the Myers-Briggs test type indicators, we can see how the mere personality types of post-Vatican II liturgists did such damage to the mystery of the Mass and its theology of adoration especially through the elimination of "ad orientem" and kneeling for Holy Communion.

Prior to Vatican II and now in the recovery of the 1962 Roman Missal referred to as the Extraordinary Form in modern parlance, the style of the celebration of the Mass since the days the home churches developed according to the temple imagery of the basilica was guided by the personality types of those who are called "sensates" and "thinkers"

Sensates who guided the theology of the liturgy for 1,500 years understood the Mass as a commemoration of the Sacrifice of Jesus on the Cross and His Glorious Resurrection. This psychological perspective backed up with doctrine emphasized the sanctoral cycle, the use of symbols and most importantly the vertical, not horizontal, aspect of worship. This enabled those who are called "thinkers" to contemplate the Mysteries of the Mass by reflecting on the entire Mass, its imagery based Scripture, its profound prayers and use of Sacred Scripture throughout the Mass.

Those in the 1970's who hijacked the renewal of the liturgy were of two psychological types and have brought untold damage to the Church's liturgy that will take one or two generations for us to rebuild and recover. They undid 1,500 years of Tradition and tradition!

The first of their personality types is that of the "feeler." The primary symbol of the liturgy for them is the community. Thus the horizontal needs to be emphasized, the relationship of the various believers first of all to one another in the touchy-feely sense, and then to The Lord in their midst. In this novelty foisted upon the liturgy and Catholics, the personality of the congregation and the priest is the most important, how friendly they are, how much they exude warmth and hospitality. It is feel good worship but devoid of adoration of the God beyond us who is our Creator and beckons us to the Church Triumphant in heaven.

The second are the "intuiters" who want to make the liturgy into a sacred meal where the focus in on what we do at Mass in terms of taking, eating and drinking. Thus everything has to look like the meals that people eat at home, no matter how ridiculous when brought to the temple of the church building. The name of the Mass as the Holy Sacrifice of the Mass is anathema to them. The dark aspect of suffering and death intrudes too much into the joy of the meal shared by friends.

So the preoccupation is with an altar that looks like a table, with how a table would be set in the home according to cultural accretions. It focuses on bread that is baked by parishioners, that can be chewed and resembles the bread of the home and where it can be broken and shared in the "horizontalness" of the moment.  The symbol of drinking the "Wine" is important too, and the procession of doing this action is very critical. The liturgical actions of the horizontal community are critical. Adoration is of little concern. It is too private, a form of privatized Catholicism.

But of course it is all horizontal and focuses on externals and forgets about Christ and our adoration of Him! What the bread and wine look like and how people eat and drink is really what is important! In essence it is a form of idolatry.

So we must return to the true nature of the Mass as we had it for 1,500 years or more and based upon the "sensate and thinkers" model of the Mass. We can do this not by returning exclusively to the 1962 missal, but by celebrating the Ordinary Form of the missal in an extraordinary way, ad orientem and kneeling for Holy Communion.

We did a horrible disservice to the victims of the first wave of "feelers and intuiters" liturgists in the post-Vatican II era who mocked and ridiculed Catholics by calling them pre-Vatican II because they wanted a "vertical, adoration" theology of the Catholic Mass as they had experienced all their lives and as the Church did for over 1,500 years.

They were told that they had to form community, eat and drink and be merry. Adoration was out and kumbaya was in! And the best way to do this was through the iconoclasm of the traditional architecture of our church temples and the reorienting of our altars so that the priest faces the congregation and the altar is in their midst and everyone stands throughout, since kneeling indicates adoration of God which is bad.

We can save the liturgy and the Church in two major ways and Pope Francis is leading the way:

1. Save the Sacrament of Confession  and get as many Catholics possible to repent of their sins and receive absolution in the Sacrament of Penance celebrated every two weeks and we will save the Church.

2. Save ad orientem in terms of the direction of adoration that the Liturgy is celebrated and we will save the Church!

It really is quite easy! BUT IT WILL TAKE ONE OR TWO GENERATIONS OR LONGER, sadly. This didn't have to happen, but somehow it is all in God's Divine Providence!
Posted by Fr. Allan J. McDonald at Friday, November 22, 2013

Yes, well, all due respect, good luck with the "easy", Father! Your analysis here is probably correct to a degree, but over time, people also incorporate into their psyche (and pass on to their progeny) what they live repetitively. Do not discount Skinnerian learning theory in the mix! The old "children learn what they live" is still true, and a powerful factor as well as the Jungian collective unconscious model.

You make a good points and I think it will take a much longer time to recover what we lost which took a very short time to do. I suspect 90% of those who still bother to go to Mass if they walked in on an Ordinary Form Mass celebrated in English but ad orientem and kneeling for Holy Communion would be clueless about what this was all about. So catechesis would be critical. But understanding the psychology and psychological types of the various the pre-Vatican II Mass and how it shifted in the post-Vatican II so called "renewal" would be important too.

"I suspect 90% ..... would be clueless about what this was all about. So catechesis would be critical."

I wonder. Holy Mass was always it's own catechesis. It's ok to memorize a catechism, orto understand the psychology of the Mass, but better to simply sense it in a Mass that's holy in worship experience as well as in sacramental fact. In years and years of talking to visitors after an EF Mass, I've heard many comment on how profound was the experience of ad orient worship and kneeling for communion, never heard anyone ask why. Apparently it was obvious, once experienced.

I truly feel for y'all...the folks on this blog. The Church has passed you by. I really don't think it is going to go back to where you would like it to be. I also hope you don't leave it and strike out on your own.

With regard to the different "psychological types" who hijacked Vat II and the liturgy…I am reminded of the scene from the movie "The Exorcist," in which the apostate Priest/psychiatrist begins to explain the case to the old Exorcist. The shrink/Priest begins, "So far, three personalities have been manifested…" The old Priest stops him and says, emphatically, "No, there is only one!"

Maybe this isn't ideal but the reality is that most folks go to their church once a week for Mass and if there is anything else that they need to do while there (such as having children at PRE or participating in adult education) this is done as a part of this one trip. This is especially true for those who live some distance from their parish church.

Given this "one stop shop" reality of modern life, wouldn't it make more sense (if possible for the priest or priests) to hear confessions on Sunday mornings rather than at some other "stand alone" time (like Saturday afternoons, which appears to still be typical now and a long-standing practice)?