LET ALL LATIN RITE CATHOLICS HAVE THE EXTRAORDINARY FORM OPTIONS FOR THE MASS THAT THE ANGLICAN ORDINARIATE MASS HAS AND LET IT HAPPEN NOW! 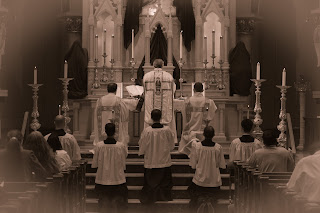 As I have repeatedly said, I love both forms of the One Latin Rite, the Extraordinary and Ordinary Forms. And depending on how the pastor and priests of the parish present these two forms, I think most Catholics would love them two, even if they have a favorite.

As you know, I am somewhat excited about the privileges given to the Anglican Ordinariate in terms of their revised Latin Rite Mass and the possibility that its sensibilities would be extended to the wider Latin Rite.

The Appendix of the Anglican Use Mass now has as options, the Prayers at the Foot of the Altar, the Extraordinary Form's Offertory Prayers and the option of the Last Gospel after the dismissal.

Our current Latin Rite Missal revised in the English has in the appendix added forms for the Penitential Act, where The Lord Have Mercy, Christ Have mercy are preceded by statements.

It also has the "Rite of Blessing and Sprinkling Holy Water" as well as models for the Prayers of the People for the various seasons of the year.

It would not be too difficult to add the additional things that the Anglican Rite has and without changing the Missal one bit, except for the appendix. Until new missals are printed, an insert could be published as was done when new prayers and saints were added to the missal prior to its English language renovation.

And while we are at it, couldn't the Extraordinary Form's version of the Asperges become optional?

In the 1960's and 70's a phobia developed amongst academic liturgists that the priest and his ministers should not have any prayers that are quietly said for their own devotional and spiritual purposes.  So the truncated reform of the Mass in the Ordinary Form got rid of the Prayers at the Foot of the Altar, the prayer the priest said quietly as he approached the altar and the prayer he said when he kissed the altar, as well as the psalm he recited to himself quietly as he incensed the altar.

All of these could easily be added again.

What in the name of God and all that is holy is wrong with the priest, deacons and ministers reciting quietly to themselves at the foot of the altar these prayers as the choir and congregation sing together or alternately the official Entrance Chant, what is also called the Introit? Why would the congregation be offended by these pious prayers said exclusively for the ministers themselves publicly as another action is taking place, the chanting of the Introit?

I think if the current missal simply had these options and clear options for ad orientem that we would see a very wonderful renewal of the Mass as Vatican II actually intended.

Pope Francis' liturgies at the basilica here are usually in Italian, but the parts of the Mass are always chanted in Latin beginning with the Greek Kyrie, then the Gloria, Credo, Sanctus, Pater Noster and Agnus Deil.

Wouldn't the mandating of these parts in Latin be a wonderful way to unite the nations and the various language groups, especially in parishes were there are many different language groups?

Father,
As I mentioned in the last post, in 2007 the USCCB has already strongly encouraged "all ethnic groups" to learn to chant the Greek Kyrie and Latin Sanctus and Agnus Dei with the additional encouragement to learn the "more difficult chants" in Latin of the Gloria and Credo once they have mastered the aforementioned simpler ones. So it has not yet been mandated but still encouraged as "laudable" by the U.S. Bishops. I know this could take time to implement but it seems more and more the sensible and right thing to do in this era of increasing Hispanic populations in the U.S. (with bilingual Masses) and with increasing immigration and globalization.

Why in heaven's name aren't we seeing more of this at a parish level (at least the beginnings of movement to learn simple Latin Ordinary parts) rather than what we now have?

This is NOT about mimicking the past--it is a REAL solution for the future which we should slowly and thoughtfully implement.

Fr. McDonald, why don't you go ahead and submit a CDW petition or query regarding the admissibility of these Ordinate options for the ordinary form? While there in Rome, it should be easy for you to obtain good advice as the form of a query that might elicit a favorable response, to the great benefit of the whole Church.

In regard to the most important option--the priest's silent private prayers during the offertory rite--I wonder whether it might not be argued that these are already be admissible (the GIRM of course governing what is said aloud), so that a favorable response could conceivably be routine. (There are those who claim Pope Benedict seemed to say these private prayers.) Does not a priest have the same right as a layman to offer silently his own personal prayers of devotion during Mass?

Father,
If you have time look at the third page of this pdf of this 1966 Sacramentary. Corpus Christi Watershed is advertising an announcement about the Ordinary Form in 2014: Could this be it?! http://www.ccwatershed.org/media/pdfs/13/11/15/12-37-46_0.pdf