HOLY FATHER TO MGRS. GUIDO MARINI: JOKE'S ON THE LOONEY PROFRESSIVES, YOU'RE MY CHOICE FOR THE NEW PREFECT FOR THE CONGREGATION FOR DIVINE WORSHIP

Things must be great between the relaxed and jovial, Msgr. Marini and the new Holy Father! A 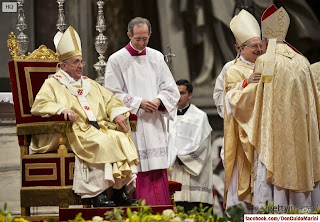 The first rule for every liberal is " a liberal is a liberal is a liberal". Francis will never promote Guido Marini if anyone it will be Piero Marini who will complete the destruction of the liturgy in the Church. Probably during the anniversary of the Reformation Francis will lift the excommunication of Luther and permit inter Faith communion, abolish celibacy and get rid of whatever is left that resembles true Catholicism. Next to get the axe will be Cardinal Burke who will probably be replaced by Wuerl. This pontificate is going to be worse than Paul VI. It's only 8 months yet seems like 8 years.

Anonymous, is it really THAT bad1? I mean, do you have any evidence for this speculation? I hope you are wrong, though I share your dismay.

I'm confused. Are this anon and rcg the same person? (I'm another anon.) I have had a feeling for some time that Fr. McDonald and Gene are the same...Gene being Fr.'s alter ego...evil twin maybe.

rcg is one of a kind.

Yes, RCG is one of a kind and I won't say what kind. LOL! Be reminded that Fr. MacDonald chastises me on the blog and in person. He rises above our worse natures better than I do…he is also far more patient than I am.
You Anonymi need to distinguish yourselves somehow.