HAS THE HOLY FATHER, POPE FRANCIS, BEEN WARNED ABOUT HIS IMPRECISION AS THE UNIVERSAL TEACHER OF THE FAITH AND TAKEN THE WARNING TO HEART? 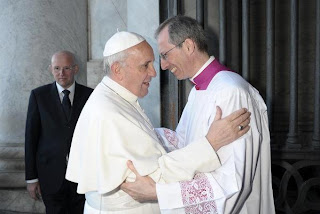 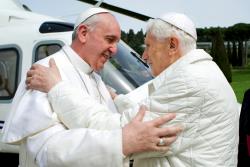 Sandro Magister  (PRESS THESE SENTENCES TO READ HIM) of the Chiesa blog has a very insightful article on the shift that is taking place with Pope Francis as he begins to clarify the "mess" he has made with some of his off-the-cuff remarks and the interviews he has given where his answers seem to be heterodox. Heterodoxy in a pope could lead to schism, especially with a living, very orthodox pope still around in the new pope's backyard. You can read Magister's well written article that basically says the same thing I've been writing for the last two weeks. The Holy Father is getting the message about his imprecision.

When you have pro-choice political movements thanking the pope for his support; when you have those in the gay marriage movement doing the same and state legislators in Illinois saying they have voted for gay marriage because of the pope, well then, Houston (or Rome) we've got problems!

But even if Benedict were dead, the potential for schism along orthodox/heterodox lines and with the living pope being in the heterodox camp harkens back to schismatic heretical movements in the early Church.

At any rate the pope is changing course on how he captains the ship or barque of Peter and he is shifting it toward the hermeneutic of Pope Benedict. He is listening to those who are raising legitimate concern and he is maturing as the Supreme Pontiff of the One, Holy, Catholic and Apostolic Church.
Posted by Fr. Allan J. McDonald at Friday, November 22, 2013

"...how the rad trads spin it the same way pushing for wider schism in their direction."

There you go again! Using the Catholic "n" word.

Seriously, I suspect I have far wider experience and acquaintance among traditionally believing Catholics, but don't personally know a single one who qualifies for the epithet schismatic; let's call it the Catholic "s" word.

How is Francis changing course? Just because an interview that showed the pope's heretical views was removed, not a day after it was given or 2 or 3, but a month after damage and scandal spread throughout the entire world. And let's not forget that the statements he made were never retracted. Why, because he believes in everything he said. Francis will never condem error or sins like abortion or homosexual unions, he just won't because being a liberal trumps being pope. He sat there in silence when the Italian president thanked him for not teaching dogma and allowing room for doubt. He sat there and never corrected that impression. He sat there. How is this man changing his modernist, Traditional hating course?

Father, I love your blog. I've read it for a long time, but ever since March I feel like it has become a Pope Francis tabloid. Ultramontanism really is at an all time high.

Thanks! But I am just being true to my nature as an unabashed papist not a cafeteria papist! :)

Anonymous, That is because Fr. and every other devout Priest like him are scurrying around until they are out of breath dutifully trying to defend, re-interpret, exegete, or decipher all the indefensible stuff he has said and done. I'm sure they feel like that have run a marathon every time the Pope says something. The lib Priests and other unbelievers in the Church (and their name is Legion) either don't care or are laughing their apses off.

The Tabloidization (that would be a step up, actually) of Southern Orders is a function of the misplaced importance that some rad trads and their pastors place on the PERSON of the pope.

The Petrine OFFICE is what matters, because it endures. The persons who inhabit that office, be they Poles, Germans, Argentinians, or North Africans, come and go and the Church continues.

The Church is not the pope nor is the pope the Church. When the two are conflated, all sorts of aberrant silliness ensues.

Ya know, occasionally (rarely, but occasionally) I agree with something Pater has said. His first sentence here is just his usual egalitarian nose-thumbing of this blog (which can be very personal at times). His second and third paragraphs make ultimate sense, and we ALL (ordained and laity, religious and secular) need to heed the truth therein.

There really is only one Savior...
And we encounter and are joined with Him in Eucharist.

Amen, Pater Ignotus. I think you got this one right!

While I agree, it does not negate the damage that can be done by the man in there Papal office...

I concur, but in the old sense of the word. I think that FrAJM was being both loyal and a good shepherd to support the new Pope who came to us in such unusual circumstances. These circumstances were more delicate considering the incredible counter-revolution Pope Benedict set in motion. Every heading except the exact azimuth set by Benedict hinted at a reversal.

FrAJM knows his audience and is bravely confronting us with the need for obedience and faith that the right things will come of this. I tend to see Pope Francis in a more positive light than many trads, although maybe not as rosy as Our Blogger. I think Pope Francis is coming to understand more than he knew before and is making incremental changes to his approach. He may have been Italian by lineage, but he is South American by culture and that is troubling from a theological and Liturgical perspective.

RCG is correct. We all need to give Father a break here.
In addition to being an avowed, faithful priest, he has been in the holy city for almost 3 months and is much closer than most of us will ever be to papal magisterial authority.
I do NOT think his observations are tabloidization; they are, rather, heartfelt ruminations reflecting his current, personal faith-walk. We should respect this, try to learn what we can, and be thankful for his sharing of the experience in Rome.

Having been in Rome and also visited relatives in Livorno, there is something very, very good happening with the Catholicism of Italians because of Pope Francis. They are becoming inquirers, almost like being in the RCIA process, because of their renewed interest in the Church and in a positive way for a change. In fact, what accounts for the tremendous surge in papal audiences on Wednesday, approaching the unheard of number of 100,000 sometimes as well as more than 80,000 at a Sunday Angelus last Sunday, late November, fewer tourists in town, is that Italians from all over Italy are flocking to Rome to see and hear this pope.
Those of you who are carping and so negative about Pope Francis need to over come the mortal sin of pride, go to Confession and be reconciled with God, the Church and Pope Francis! Just my 2 cents.

One can be reconciled with God without being reconciled to the Pope (forgive the vestigial Calvinism rearing its head…but he was right about that).

Actually, Ignotus, it is. When one realizes, after years of study, prayer, and reflection, that Calvinistic theology has led one to the Catholic Church, it is quite a revelation. Once Catholicism is embraced and confessed, there is a radical change in your theological thinking and in your worship life…however, Catholic theology and doctrine highlight the things in Calvinism that have value and cause one to realize that the good stuff in Calvin was already there in Augustine. This not only validates one's chosen Catholicism, it enables one to see and understand that Calvin became trapped in his own logic ( a type of pride), which led him to error.
Calvin's greatest emphasis was upon the sovereignty and majesty of God…that God's great love is shown primarily through His sovereignty… and that our need for a Father, a Judge, a Rock against which all human will and power breaks is the greatest manifestation of real transcendent love. This is a lesson that even the Catholic Church has to re-learn over and over again. I'll keep that vestige...