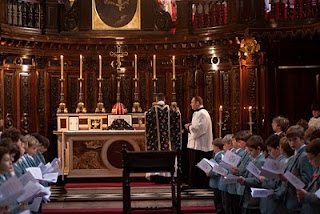 Those of you who read the liturgical blogs know that when Pope Benedict issued Summorum Pontificum liberalizing the permission to celebrate the Mass according to the 1962 Roman Missal, that many in the liturgical renewal, especially those who worked heroically to promote their particular understanding of Vatican II's Sacrosanctum Concilium, were outraged and terrified that the broader use of the 1962 Missal would undermine the "spirit of Vatican II" that they had spent most of their religious career's striving to implement. In a sense, these poor liturgists developed overnight what could be call EF-APHOBIA!

Some in the more moderate liturgical movement feel that we need to go back to having only one missal that the Latin Rite celebrates, but that missal should look and feel more like the 1962 missal. I've offered suggestions on this in the past, but I personally feel that maintaining the 1962 missal as a legitmate option, but celebrating it through the lens of Sacrosanctum Concilium does not harm the unity of the Church.

So if I were a close advisor to the Holy Father, these are my recommendations:

Keep the 1962 missal as is, eliminate anything from it that could offend Jews,(in the Breviary also) that might be blatantly anti-Semitic and insist that the laity participate in song and word where it is prescribed now for altar boys and choirs. Keep everything else as is including the 1962 missal lectionary.

For the 1962 missal, though, allow for a clear option of the revised Lectionary to be proclaimed as it is in the OF Mass. As well, allow for General Intercessions following the Creed and an offertory procession of gifts. In low Masses, allow the Introit, Offertory Antiphon and Communion Antiphon to be recited in common by priest and laity and in the vernacular.

As it regards the Ordinary Form of the Mass, revise it so that its order and rubrics are closer to the 1962 missal, maintain the vernacular as it is being revised in English currently. This is what I would recommend to the Holy Father as as revised Roman Missal in the Ordinary Form.

1. Require that the official Introit, Offertory Antiphon and Communion Antiphon always be sung or spoken, that nothing else replace it.

2. Change the placement of the Introit so that it corresponds to the 1962 missal. By this I mean, after the priest arrives at the altar, he goes directly to his chair and begins with the Sign of the Cross and greeting. Then he introduces the Mass as prescribed in the Missal and all pray the Confiteor. The absolution is given. Then the priest leaves the chair, approaches the altar, kisses it as the official Introit is sung or said. If incense is used, it is used at this point. The changing of the position of singing the introit would not preclude a metrical hymn of one's choice being sung for the entrance procession or simply a strong instrumental procession.

4. All are seated for the Liturgy of the Word as it is currently carried out in the OF Mass.

5. After the homily, Creed (which should be mandated to be sung in sung Masses) and the General Intercessions, the Mass continues as the custom of the current OF Mass allows, with the offertory procession of gifts, the singing of the official offertory antiphon and any other anthem deemed appropriate. The offertory prayers are as they currently are in the OF Mass.

6. The Roman Canon is prayed in the vernacular, but with the rubrics of the 1962 missal except is is spoken or sung aloud. The other Eucharistic Prayers are prayed as they currently are, except for the addition of the double genuflection at the consecrations. The rubric of the use of the pall is made explicit in terms of when it is to be removed and replaced on the chalice with the appropriate genuflection that is required for this in the 1962 missal.

7. The Rite of Holy Communion as it is prescribed currently in the OF Mass, but with the singing or saying of the official Communion antiphon and any other communion hymns. Kneeling should once again be the normal way of receiving Holy Communion in the Latin Rite along with receiving on the tongue. 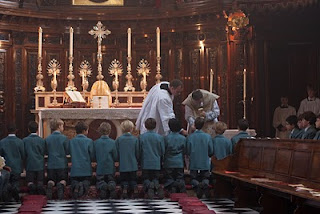 8. The concluding rite and dismissal and recessional as currently.

9. The Revised Order of the Ordinary Form of the Mass should have explicit rubrics for a legitimately optional Ad Orientem Celebration of this Mass as well as Facing the People form of this Mass.

I think implementing my humble suggestions would not offend the "noble simplicity" that Sacrosanctum Concilium explicitly requested. My changes are minor revisions and reform within the hermeneutic of continuity!

In addition to my suggestions above, we would follow the advice below on sacred music from ZENIT:

ROME, OCT. 7, 2010 (Zenit.org).- Sacred music cannot be limited to Gregorian chant, but it is chant that contains the key to renew liturgical song, according to a consultor for the Office of Liturgical Celebrations of the Supreme Pontiff.

Father Uwe Michael Lang, also an official of the Congregation for Divine Worship and the Sacraments, made this observation Wednesday at a lecture at l'Accademia Urbana delle Arti in Rome.

Father Lang pointed to the 1749 encyclical "Annus Qui" by Pope Benedict XIV as the "most important papal pronouncement on sacred music" prior to Pope St. Pius X's "Tra Le Sollecitudini."

The 18th century encyclical "proposes the important criteria of sacred music that are valid beyond the limits of their historical context and resound also in our time," the priest said.

Father Lang explained that the encyclical presents plainsong as normative for the Roman liturgy "while it approves unaccompanied polyphony and also permits orchestral music, though with certain conditions, in divine worship."

He said this position of the Church is reflected in the constitution of sacred liturgy from the Second Vatican Council, which "exalts Gregorian chant as the 'proper' music of the Roman liturgy."

"The pre-eminence of chant," Father Lang further recalled, "was confirmed by Benedict XVI in his 2007 post-synodal apostolic exhortation 'Sacramentum Caritatis.'"

Father Lang proposed that the value of Gregorian chant is "its profound relationship with the liturgical text, to which it gives musical form."

"'Annus Qui' requests explicitly the integrity and intelligibility of the texts that are sung in the Mass and in the Divine Office," the priest affirmed. "This concern was already debated in Trent, but not included in the council's official documents."

He added that though "sacred music cannot be limited exclusively to Gregorian chant, it has in itself, however, the keys for a true renewal of sacred music."

Do you think you could get assigned to our parish? I'm kidding of course. Thank you for your efforts to restore the Mass.

We hope someone out there in an appropriate position, perhaps in Rome, is noticing you and your ideas.
Well thought out, clearly articulated, and very sound.

I'd be very, very worried if Rome is reading my blog, terrified in fact! Certainly if they are, I hope they know that I offer these suggestions as purely speculation and not anything I would do on my own authority. But since we are revising the liturgical books for the OF Mass, why not strike now with a better version of this Mass and the cross influence that Pope Benedict has in mind from the EF Mass? Do we have to wait another 40 years when we'll only see it from heaven?

I pray someone is indeed reading in Rome. Someone from the Congregation for Bishops hopefully. In the Diocese of Savannah your Parish stands as a bastion of Orthodoxy. Rome needs to find such Priests or it's reform will founder with Benedict's successor.