TODAY IS PRO-LIFE SUNDAY, BUT EVERYDAY SHOULD BE PRO-LIFE FOR CATHOLICS 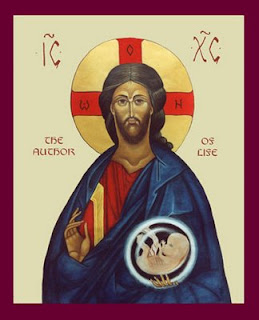 The following is the article I wrote for St. Joseph Church's October newsletter:

While every day of every month should be pro-life for all Catholics, we use the month of October to remind ourselves of the necessity of protecting human life from conception until natural death.

Our focus begins with the innocent unborn. In today’s permissive culture and through law, the child in the womb is the most vulnerable. Legally killing a pre-born child has the protection of the law. The unborn have fewer rights than your pet dog or cat. In the United States alone, the number of abortions since the legalization of it by the Supreme Court is staggering. No war or acts of terror, not the death penalty or euthanasia have taken more lives of the innocent than abortion.

It is important, though, to remember that women who experience what is termed a “crisis pregnancy” sometimes are pressured by family and friends and the easy availability of abortion to procure one. They later regret this decision. We must be conscious of those who are in pain over past decisions. In some cases, the father of the child is equally responsible for the decision and feels much guilt and pain later in life too. The Church has ways to counsel those with post-abortion traumatic disorder. We want to offer God’s healing and reconciliation along with any penance that is due.

As Catholics, we must realize that it is immoral to be pro-choice. How would you feel if I publicly stated that I was personally opposed to the sexual abuse of minors by priests, but I wouldn’t take that choice away from any priest? There would be moral outrage! And rightfully so! A child is always victimized in abortion and the victimization is death. The child can’t sue you; the mass media won’t castigate you and your enablers the politicians, political parties and judicial systems. You won’t be thrown into prison for this crime, but it is a heinous moral offense before God and humanity.

Our pro-life efforts also extend to those who are born and not so innocent. We want to help alleviate the plight of the poor, injustices against people and comfort the aging and the dying. The Church is not opposed to natural death at the end of life or withdrawing extraordinary means to keep someone who is dying alive a bit longer. The Church is opposed to active euthanasia and withdrawing the ordinary means to keep someone alive like food and hydration.

And finally, the Church is becoming more aware that the death penalty is no longer needed to protect society from criminals. Although the Church is not opposed to the death penalty in every case for the protection of society, there is a movement to find alternative ways to punish the guilty and keep society safe apart from killing the convicted guilty. The Church, however, does not place this theological belief on the same level as protecting the innocent unborn.

I hope you are pro-life and actively encourage those who are pro-choice and even pro-abortion, pro-euthanasia, pro-death penalty to reconsider their positions. Stand up for Christ and Christ’s teachings revealed to us through the Church. Be pro-life in all ways. God bless you.
Posted by Fr. Allan J. McDonald at Sunday, October 03, 2010

Thank you, Father... this is a very powerful article.

When I tell my children to clean their room, or to clean the kitchen or other chores, I find that I am frustrated with their response if I only command it and expect them to place everything in order on their own. We are both much better for it if I give them detailed instructions and show them how things are related: where the items are placed, how to clean them, where the cleaning supplies are stored and how to be frugal with them. After they have mastered the basics I do well again to leave them alone and let them determine how best to clean the room, after all they live in it. They only have to consider how their variations affect the rest of the family who buy the cleaning supplies, or use the room, too.

The people of the Church and the world at large need guidance, but it must be tempered with the latitude to use their free will to reach new and unique solutions to problems. The adult must accept responsibility for his actions. It is the vestment of the individual in the solution that gives them at least partial ownership of the situation. Women will seek abortions when they feel they are trapped by the pregnancy rather than drawn deeper into our society as a values member. Likewise a person in the throws of death will seek an early end to the fight if he sees no meaning to his live without their health. Both reflect a shallow use of the individual.

The poor become extremely difficult, if not impossible, to help if their poverty is defined by the things they are not given.

Even the prisoner may deserve to live if he can be prevented from doing more harm.

The key to the Gospel, is seems, is in the last sentence. 'We are unprofitable servants; we have done what we were obliged to do.' In some ways the parishioners are browbeaten into waiting to be told what to do to help the poor or aged. It usually comes in very specific instructions about how to vote, boycott, or donate. We need to be giving general guidelines and let the people do what they can with the skills they have. Just as we would not judge someone for their worldly possessions.

I was at Mass this weekend and heard Sr Elizabeth speak. She is the one I saw in the WalMart. I liked what she said and am glad our church has FAM. It sounds like they do good work there. I was very touched by her words. I don't usually donate things but I think I need to realize that I can't let everyone else do all the work in my name. So, I will start by getting some diapers to
do my share. I don't know what else yet but I am really concerned with pro-life stuff.
Thanks Fr for your awesome blog, for letting Sister speak, and for generally being a good leader and pastor.