Father Michael Lang, a disciple of Pope Benedict's hermeneutic of reform within the context of Continuity with the Church of the past, gives a marvelous talk in the Archdiocese of Columbo, Sri Lanka. Read is complete talk after the excerpt I offer below. 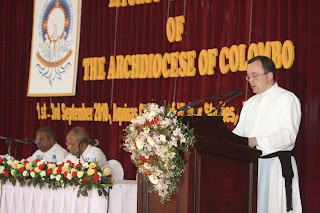 Why do some liturgist's so abhor this manner of receiving Holy Communion? 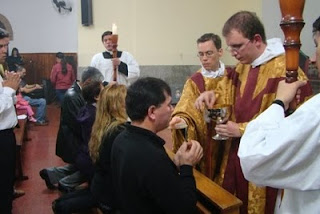 REV. FR. MICHAEL LANG in a talk given in Colombo, Sri Lanka gives a very good catechesis for the return to receiving Holy Communion while kneeling and receiving the Consecrated Host on the tongue. I was well schooled the the Hermeneutic of reform within the context of rupture during the late 1970's and for many years thought this hermeneutic was what the Second Vatican Council (and thus the Holy Spirit) wanted for the Church. I believed this in faith. I realize that this belief was a misplaced and misdirected belief. I think Pope Benedict and now his disciples like Fr. Michael Lang, who is a young whippersnapper, have shown the fallacy of the much touted theological perspective of reform in discontinuity and how the Second Vatican Council taught no such thing, only those after the Council who misinterpreted the Council. But don't people also misinterpret the Bible? I highlight what Fr. Lang said about receiving Holy Communion in the Ordinary Form of the Mass and link to you his complete excellent talk below it:

Communion Received on the Tongue and while Kneeling

The oldest practice of distributing Communion was, according to the early Fathers of the Church, to give Communion to the faithful in the palm of the right hand. However, already towards the end of the Patristic age, the practice of receiving Communion directly on the tongue became more widespread. In fact, virtually all the liturgical rites that can claim an apostolic origin have adopted Communion on the tongue. The reason for this preference is twofold: first, to minimize the dispersion and consequent profanation of Eucharistic fragments; secondly, and more importantly, the increasing devotion of the faithful to the Real Presence of Christ in the sacrament. In fact, even today the norm for receiving Holy Communion is on the tongue, although in many countries the Conferences of Bishops have received the permission of the Holy See that the Sacred Host may also be distributed in the hand of the communicant.7

Over the centuries, the Church has always sought to mark the moment of Holy Communion with the utmost dignity and sacredness. The Sacred Banquet, when Christ gives Himself in the Blessed Sacrament, requires external gestures that will help the faithful to become conscious of this great mystery. Among the signs of Eucharistic devotion, the Latin Church has established the custom to kneel while receiving the Sacred Host. A famous expression of Saint Augustine of Hippo, has been taken up by Benedict XVI in his Post-Synodical Apostolic Exhortation Sacramentum Caritatis: "no one eats that flesh without first adoring it; we should sin were we not to adore it".8 The Holy Father comment : In the Eucharist, the Son of God comes to meet us and desires to become one with us; eucharistic adoration is simply the natural consequence of the eucharistic celebration, which is itself the Church's supreme act of adoration. Receiving the Eucharist means adoring him whom we receive. Only in this way do we become one with him, and are given, as it were, a foretaste of the beauty of the heavenly liturgy.9

The posture of kneeling when receiving Holy Communion expresses and increases the inner attitude of adoration that is absolutely necessary when receiving Christ in the Holy Eucharist. Pope John Paul II wrote in his last encyclical Ecclesia de Eucharistia : By giving the Eucharist the prominence it deserves, and by being careful not to diminish any of its dimensions or demands, we show that we are truly conscious of the greatness of this gift. We are urged to do so by an uninterrupted tradition, which from the first centuries on has found the Christian community ever vigilant in guarding this "treasure". Inspired by love, the Church is anxious to hand on to future generations of Christians, without loss, her faith and teaching with regard to the mystery of the Eucharist. There can be no danger of excess in our care for this mystery, for "in this sacrament is recapitulated the whole mystery of our salvation".10 For these reasons and in keeping with the teachings of his venerated predecessor, Pope Benedict XVI has begun, on the solemnity of Corpus Christi in 2008, to distribute the Body of Christ to the faithful, kneeling and directly on the tongue.
Posted by Fr. Allan J. McDonald at Friday, October 15, 2010

Our Holy Father is showing us by example what to do. We should follow