WHAT DO A MINE RESCUE AND HOLY BAPTISM HAVE IN COMMON?

Which of the two images is more dramatic? I would say the Holy Father baptizing an infant. Like those gathered around the rescued miner, so those who gather for baptism witness a great event, Jesus Christ lifting us from the depths of the waters of destruction to new and eternal life.
A rescued infant: 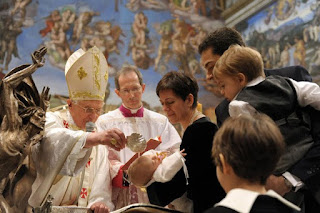 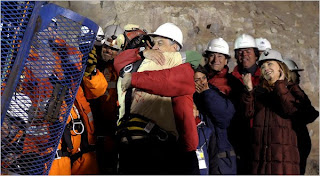 Out of the Depths (De profundis)

Out of the depths I cry to you, O Lord;
Lord, hear my voice!
Let your ears be attentive
to my voice in supplication:

If you, O Lord, mark iniquities,
Lord, who can stand?
But with you is forgiveness,
that you may be revered.

For with the Lord is kindness
and with him is plenteous redemption;
And he will redeem Israel from all their iniquities.

A partial indulgence is granted to the faithful, who piously recite the psalm Out of the depths (Ps 129)

Out of the Depths

The 33 miners who were trapped for nearly 70 days in a Chilean gold and copper mine are all alive and safe. They were freed today, on October 13, the day of Our Lady of Fatima. But there is more...

By Robert Moynihan, reporting from Rome

"De profúndis clamávi ad te, Dómine" ("Out of the depths I have cried unto thee, O Lord"). —Psalm 129, known as the Psalm "De Profundis" ("Out of the Depths"), from its first two Latin words

The Mystery of Prayer and Redemption

Prose is not adequate to describe what has just happened in Chile. It requires poetry -- like the poerty of the Psalms.

Thirty-three miners, caught in a mine cave-in hundreds of meters below the surface of the earth on August 5, 69 days ago, began to be brought up to the surface today, one by one.

The first man was rescued just after midnight, in the first moments of October 13, and as this is being written, a little after midnight in Rome, 28 miners are safe and the 29th miner is about to be brought to the surface, so it appears all will be brought out within one day.

[Just now, the 33rd miner has been brought up, so all the miners are safe. All were brought up in 22 hours. Here is a link to the BBC live news feed from Chile: http://www.bbc.co.uk/news/world-latin-america-11489439]

All Lost, All Found

At the beginning, it was thought they were all lost, as there was no contact with them at all. Not a sound. Silence.

Then, after 17 days, they were all found to be alive, and safe in an underground cave. But it was still thought that the rescue operation would take many months, until Christmastime, perhaps, and that the men, confined in such a small space, might all go mad before they could be freed.

And now, today, in a feat of engineering worthy of all praise, they have all been brought up safe and in their right minds.

And the entire world has been able to watch as this drama has unfolded.

But there is a little known aspect to this amazing story, and that is an aspect related to Pope Benedict, and to the rosary.

The rosary the prayer par excellence of Our Lady, because in its traditional form, it contains 150 Hail Marys in 15 joyful, sorrowful and glorious mysteries -- the same number as the Book of Psalms.

Benedict offered public prayers for the miners on several occasions, but he also decided to send each of the miners a special gift: a rosary he himself had blessed.

The rosaries were brought to the miners personally by Cardinal Francisco Javier Errazuriz of Santiago, Chile.

It is said that, to survive, the miners organized their life in a disciplined way, even creating a little chapel in the corner of their cave. Praying the rosary, according to a report, became a part of the trapped miners' daily ritual.

(Here is a Rome Reports video which describes this gift of rosaries; it is located at: http://www.youtube.com/watch?v=aH5azcuEL_Y&feature=channel)

And now, on October 13 -- the anniversary of the last appearance of the Virgin Mary to the three shepherd children in Fatima, Portugal -- the miners are safe.

The Prayer in Westminster

October 13 is also the feast day of Saint Edward the Confessor, in the United Kingdom.

The drilling to free the miners started on September 17.

The Pope was in London on that day, the second day of his trip to Scotland and England.

At the service on September 17 at Westminster Abbey, Pope Benedict and the Archbishop of Canterbury, Rowan Williams, prayed before the tomb of Saint Edward the Confessor.

On October 13, Saint Edward's feast day, the miners are free.

At a Mass in Chile that began just after near midnight on October 13, as the first miner was being brought to the surface, Santiago Auxiliary Bishop Cristian Contreras Villarroel, speaking in El Sagrario chapel next to Santiago's Metropolitan Cathedral, said the lives of the 33 miners should be seen as a sign of the need all people have for redemption.

And the bishop echoed the words of Psalm 129, where it says, "If thou, O Lord, shalt observe our iniquities, Lord, who can stand?"

"There is no saint without a past, nor sinner without a future," the bishop said.
"Out of the depths, O Lord, I cried unto Thee"

The most powerful single line in all the psalms -- arguably the supreme poetic monument of the Jewish, and of the Christian, religious-cultural tradition -- is this one: "Out of the depths, O Lord, I cried unto Thee."

The words sum up all the sorrow of a frail humanity, mortals doomed to inevitable defeat by the power of sin and death.

The words could have been spoken by Jonah in the belly of the whale, by Job from the ash heap in his sufferings, by David surrounded by enemies seeking his life, by Jesus when he was raised, to all outward appearance totally powerless, onto the cross, then laid, limp and cold, in his tomb.

Psalm 129 is part of the Vespers liturgy for the dead, and expresses the hope that the one who has fallen into shadow and darkness, the one who has been overcome by death, will yet be saved, and come again into the light.
Here is moving text of Psalm 129, first in Latin, then in English, which seems to express the prayer of the miners, caught in the dark under half a mile of rock for 70 days:

Out of the depths I have cried unto thee, O Lord; Lord, hear my voice.
2 O let thine ears be attentive to the voice of my supplication.
3 If thou, O Lord, shalt observe our iniquities, Lord, who can stand?
4 For with thee there is merciful forgiveness: and by reason of thy law, I have waited for thee, O Lord.
5 My soul hath relied on his word my soul hath hoped in the Lord.
6 From the morning watch even until night: let Israel hope in the Lord.
7 Because with the Lord there is mercy, and with him plentiful redemption.
8 And he shall redeem Israel from all his iniquities.
9 Eternal rest grant unto them, O Lord.
10 And let perpetual light shine upon them.

In front of the whole world, on this October 13, for these miners, and for all of us as well, who are witnesses of it, the stone has been rolled back.
Posted by Fr. Allan J. McDonald at Wednesday, October 13, 2010

Could one say that the image of the people embracing the rescued miners is like the Church welcoming back her lost sheep when they return to the Church?

Yes, could be an image of not only adult baptism but also of the sacrament of penance!

Sadly, I believe it represents more accurately the fact that the dramas of Salvation History, true matters of ultimate life and death, go largely unnoticed by a narcissistic culture that is obsessed with spectacle, sentimentality, violence, and sex. One could hope that witnessing this event might lead viewers to experience, vicariously, this brush with death and repent, confess, and go to Mass (or church). However, as is usually the case in our sound-bite society, most people who stumble over a moment of truth manage to pick themselves up and keep right on going.

I once had a teenager tell me that she did not believe in infant baptism. Her words were, "I think the child should make that choice when she is old enough."

I asked her if she believed in immunizations against disease. When she replied that she did, I said, "Well, if you are going to immunize a baby against small pox, diptheria and other diseases, you should also want your child baptized." She asked what I meant. "All children who are born are infected. They have been infected with Original Sin. The only way to cure the infection and immunize them is to have them Baptized. Failure to do so will cause the infection to spread and could make things worse for the child." She seemed to get it then.

She thinks it should be "their choice" but that is what confirmation is..... infant baptism is the "immunizations" for children, and confirmation is the choice to continue and to accept as their own...

Lori, all sacraments including Baptism and Confirmation are initiative of God exercised through the sacramental ministry of the Church. We do tend to tell children who are preparing for Confirmation that it is their choice, so they are free to reject it or postpone it. Yet I always tell our teenagers that while it is true they can reject the grace of God and His divine initiatives, that this rejection is a mortal sin if done with full consent of the will and knowledge of the seriousness of saying no to God. Ultimately a mortal sin is always one's free choice to say no to God. In the Eastern Rite of the Church as well as in all of Eastern Orthodoxy, all three sacraments of initiation are administered to the infant, Holy Baptism, Chrismation (Confirmation) and Holy Eucharist in the form of a drop or two of the Precious Blood. Thus the Eastern Church has preserved the oldest sacramental tradition of the Church that the west has recently recovered in the Rite of Christian Initiation of Adults, Baptism, Confirmation and Holy Eucharist at the Easter Vigil.

Excellent post, Father. You hit that one out of the park.