THE VIGIL OF OUR LADY OF THE HOLY ROSARY 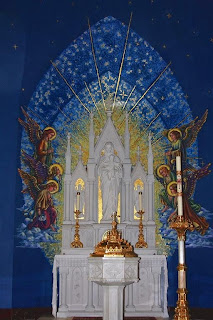 On Wednesday night at 7:00 PM we will celebrate our annual Solemn Recitation of the Holy Rosary in honor of Our Lady of the Holy Rosary. It is prayed within the context of Solemn Exposition and Benediction of the Most Blessed Sacrament. We recognize our second graders who are preparing for First Penance and First Holy Communion and our 9th graders who are preparing for the Sacrament of Confirmation. They will receive a special recognition and blessing during this service.

Our combined choirs will sing anthems between each of the Glorious Mysteries of the Holy Rosary including "Felix namque es", "Magnificat"; and "O Gloriosa Virginum". These will be interspersed with traditional congregational Marian hymns.

The Catholic Encyclopedia has a summary of the history of the Feast:

It is believed that Heaven has on many occasions rewarded the faith of those who had recourse to [the Rosary] in times of special danger. More particularly, the naval victory of Lepanto gained by Don John of Austria over the Turkish fleet on the first Sunday of October in 1571 responded wonderfully to the processions made at Rome on that same day by the members of the Rosary confraternity. St. Pius V thereupon ordered that a commemoration of the Rosary should be made upon that day, and at the request of the Dominican Order, Gregory XIII in 1573 allowed this feast to be kept in all churches which possessed an altar dedicated to the Holy Rosary. In 1671 the observance of this festival was extended by Clement X to the whole of Spain, and somewhat later Clement XI after the important victory over the Turks gained by Prince Eugene on 6 August, 1716 (the feast of our Lady of the Snows), at Peterwardein in Hungary, commanded the feast of the Rosary to be celebrated by the universal Church.