TRADITIONAL ALTARS, MODERNISTIC ALTARS, AND ALTARS WITHIN THE HERMANEUTIC OF REFORM IN CONTINUITY WITH OUR TRADTION; WHAT DO YOU THINK ABOUT THESE?

This altar arrangement looks sacred! How about the others below? 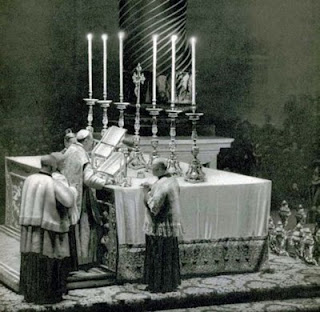 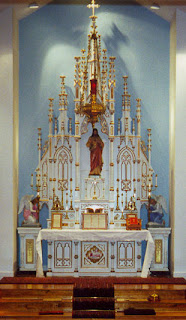 This was the altar for an outdoor Mass in Sicily this past week with Pope Benedict. This altar is very much in continuity with what you see above as the way altars looked prior to the some of the more dreadful reforms of the Mass and altars after Vatican II. These dreadful reforms were not needed and have done more to hurt the faith of Catholics than most anything else that has happened in the Catholic Church these past 40 years. If the altar doesn't inspire faith, if poor celebrations of Mass on these dumbed down altars occur every Sunday, is it any wonder we're down to about 28% of Catholics attending Mass on Sunday today compared to almost 90% in the time immediately prior to the Second Vatican Council? Is it any wonder that a very high number of Catholics today do not believe in the Real Presence of Christ in the Most Holy Eucharist compared to Catholics immediately prior to the Second Vatican Council where the majority of Catholics did? We need Pope Benedict's hermeneutic of reform within continuity to reverse the damage we brought upon ourselves immediately following Vatican II and some of the silly dumbing down of our altars, ritual and piety. 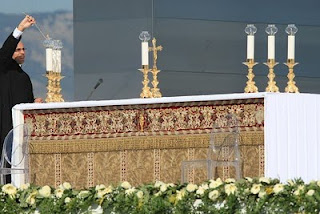 I'm not opposed to modern architecture for Churches and the new Los Angeles Cathedral intrigues me on many levels. However, can you pick out the altar from this vantage point? It is as though it's not even there. It's fine for those who are near it, but from any distance it is swallowed up by the massive space and invisible. If it were three steps higher, more rectangular than square, with a modern reredos behind it and Pope Benedict's revival of the traditional look of the altar with six candlesticks and crucifix, then I would stand up and applaud. But right now I say, it missed the mark! 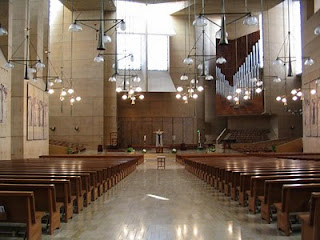 Look at the horrible "ironing board" thing they placed in front of a magnificent Extraordinary Form altar. What are we thinking when we do this sort of trash and what does it convey to the congregation about the differences in the EF Mass altar and the OF Mass altar? Which Mass and what altar has more dignity? Why did we shoot ourselves in the foot over this kind of supposed "sacred sign?" These sorts of things have done more to diminish the Catholic faith and our understanding of reverence, piety and respect for the sacred. 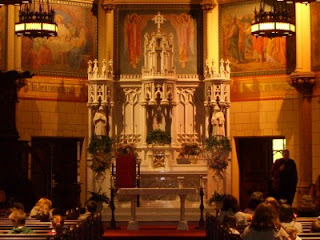 This one misses the mark too! 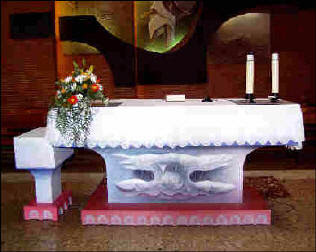 Does this altar give you the warm fuzzies of the hermeneutic of reform within continuity? Blah! 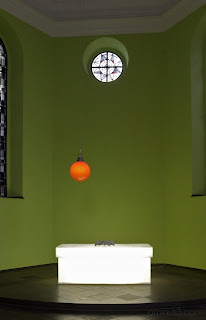 This one really misses the mark of reform within continuity, there is a rupture, but certainly there is continuity with a Masonic hall! How do you like the altar? 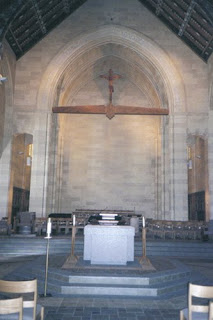 I can only fantasize about how strong my faith might have been and how unlikely it would have been for me and others to leave the Church if my home parish when I was growing up had a traditional altar with a reredos, or had a modern altar with arrangements like the Pope had for outdoor Mass (as in your other post),if we knelt for Communion, and if we sang reverent hymns instead of Kumbaya and Micheal Row Your Boat Ashore.

The modernists think that all the dressings are putting on a show that puts attention on the us, the humans, promoting self-pride instead of God. Whereas those who 'get it' view all the dressings as presenting God the best we have to offer and reminders of how small we are in comparison.

I'd bet that most of those 'modern' Catholic churches were designed by non-Cathoics.
Does Europe have such plain disgns in it's newer churches? Does it even have newer churches? (Given how secular they're becomign).

Is that, indeed, a jack-o-lantern hanging from the ceiling in the seventh picture down?

Sheila, the most beautiful Churches in Europe stand nearly empty, or filled by tourists.

In countries such as France the "Traditionalists" (some would call them schismatics) almost outnumber the "rank and file" NO Mass attendees. In a perverse way, Archbishop was right in so far as France was concerned. Without the SSPX there quite possibly be no practicing Catholics in France.

Undoing wreckovations should be a top priority in parishes and would go a long way in righting many wrongs. The new modern Altars pictured here are hideous. If it were my parish I would bow my head in shame.

may i say stop putting a table over the EF altar?! Those who want to celebrate 'face the people mass' build their own church buildings and put their tables there in the chancel. Post v2 catholics follow bugnini style than the REAL V2 SYLE WHICH papa Benny is implementing nowadays