A COMMON FIXED DATE FOR HOLY WEEK AND EASTER? 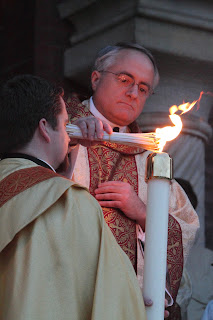 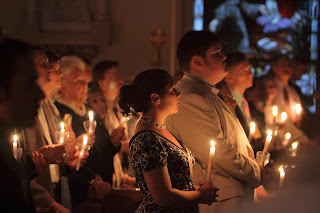 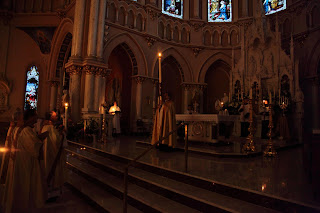 What many believe to be the true Holy Week which is always the first full week of April, also known in both traditions as "Masters Week!" 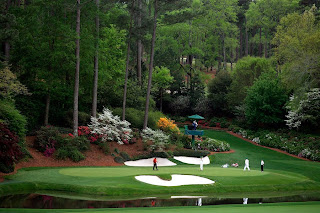 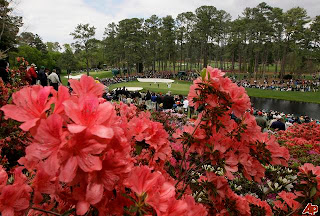 The Synod on the Middle East meeting at the Vatican has resurrected the idea of having a fixed date for Easter so that Catholics, Protestants and Orthodox Christians would always celebrate the Resurrection of our Lord on the same date. The Vatican has never been opposed to this concept. In fact Pope Paul VI in the 1960's endorsed such a move. You can read the CNS story about this by pressing this sentence.

I have just two major concerns although I'm not opposed to it altogether. My first concern is that not all Protestant Churches would follow the lead of main line Protestant denominations who might agree to a fixed date for Easter. Thus in the USA, we would have a greater number of Christians having two dates for Easter whereas currently just a small minority of Christians, the Orthodox, normally have a different date for Easter. I wonder if we can get all the Protestant denominations that there are to agree to a fixed date.

Secondly, the fixed date for Holy Week and Easter must not be the first full week of April. That belongs to the Master's Golf Tournament in Augusta! The clergy always hated when Holy Week and Easter fell during the same week as Masters' Week which happens currently every few years. Augustans evacuate Augusta during Masters Week since all the schools are closed for that week, and many rent their houses to visitors. Holy Week really takes a back seat to Masters Week and that's sad.

Masters Week not withstanding, what are your thoughts on a fixed date for Easter? When would be best? In the south, the second week of April would be great because that normally is the peak of spring with all the azaleas, dogwoods and other flowering trees and bushes in all their glory!
Posted by Fr. Allan J. McDonald at Saturday, October 16, 2010

Imagine the following scenario.
A Vatican announcement is made that the churches of the East and West have agreed upon a fixed date for Easter/Pascha and it will begin 20XX.
(The world press would be all over it!)
Now, all of societies functions and institutions that will be affected will be talking and planning for it.
Schools in every back corner of the world, bodies of governments, national holidays, stores, business of all natures, the travel industry, the adverstising industry, the banking industry, the list goes on.
There will be worldwide discussion of why it wasn't fixed before, which will be a vehicle for learning about the Church and it's history for so many who otherwise wouldn't have had occassion to learn or consider such things.
There will be pundits on television shows the world over and great discussion amongst other religions and how this causes them to engage in internal reflection of why they do what they do.
The fact that this is a giant first step toward full reunification of the churches of the East and the West who put aside personal pride in their own 'uniqueness' for the common good of Christ's Church will be seen as a clear sign of hope for pease in the Holy Land. For what hope is there when Christians retain personal pride at the expense of His Church? As the world sees this seemingly small example of compromise and working together it will set in motion a ripple effect of good throughout the world.

Plus all the reasons mentioned in the link too.

Concern about USA protestant denominations getting on board seems kind of small when you think about it. They'll get on board within a few years max.

I doubt if the secular world will even notice...except for the marketeers. Nobody cares about history, especially Church history. Most people educated in the public schools can't even place WWII and the Civil War in the right century! There will be no discussions on TV...it will only serve as a reminder to the media scum that, "Hey, we haven't smeared the Church today. Let's get on this Easter thing...got any new Jesus jokes?" And, the first and only "giant step" towards "full reunification of the churches of the East and West" will be when angels' trumpets split the skies asunder and the graveyards are the busiest places in town. Nice thought, though, Squeeker Lamb.

Do I hear angles' trumpets in the distance?

I read your comments about the Master's, Father.

Now God is powerful but He is not the Augusta National Golf Club. Furthermore, whilst the death and resurrection of the Savior are important events, one must remember that there is a Green Jacket to be won! One must have one's priorities in order.

The National will let you off with a warning on this occasion but be warned that any further outbursts may result in the loss of practice round privileges and/or the permanent forfeiture of tournament badges.

kiwiinamerica, what you say is so true and we don't want to mess with the Masters! And all the privileges of salvation that flow from those greens!