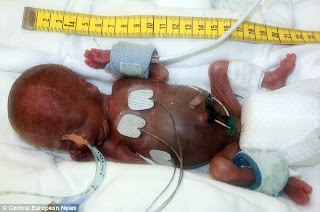 Early this morning at 2:30 AM, I was called to the hospital. A pre-mature baby, born five months into the pregnancy was on life support. She had all kinds of internal deformities and had been on life support in the neo-natal care unit following several surgeries.

After I met with the child's family, the baby, although on life support, began to code, that is to die, her heart rate plummeted. The family had already made the decision to take the child off of life support, but the doctor had to be contacted first before this procedure could take place.

As the child's heart rate plummeted, the nursing staff, to the objection of the mother, began manual CPR on this pre-mature baby. They could not follow the family's direct request to allow nature to take its course without the doctor's consent.

As I watched the medical team do their "heroic" work to save this baby's life or at least pro-long it until the doctor told them to remove life support from her, I thought to myself that this baby, although 5 months into her development in the womb, looked like a fully formed baby.

In another venue and in other circumstances, this baby could have been aborted. Rather than heroic measures to save this baby's life, a medical team would have killed the baby acting as if this was just some glob of genetic material, a mere fetus with no human value.

In both cases, the medical team was following the letter of the law. In the first, they had to do everything possible to save the baby's life, although they were waiting word from the doctor to terminate life support. Until they got that, they could not allow the child simply to die a natural death. How odd!

In the second case, that of abortion on a baby this far along in a pregnancy, the law allows the mother to make the decision to kill the child directly. This gives license to the medical team to kill the child without being charged with negligence, murder or man slaughter or infanticide.

I'm not sure the lesson I learned this morning other than human life is sacred and we have no right to play God.
Posted by Fr. Allan J. McDonald at Friday, October 08, 2010

Thank you for leaving your warm bed to care for the souls that God has entrusted to you and thank you for sharing that story.

Ditto to what Paul said.
And to still get up early in the morning.
A good example for the rest of us.

Father,
I received this same lesson in April 2009. I was already pro-life at the time when my wife and I lost our fourth child 17 weeks into the pregnancy, but this tragedy changed our whole world view. By God's grace, we were given a chance to hold our son for about 30 minutes. I can tell you that I will never be the same. He was a perfectly formed, yet miniature, human being. That countless others his age are considered expendable by so many is just devastating. I'm amazed we've escaped God's vengeance for so long.

That was a beautiful post. Please forward this to Nancy Pelosi and all other members of Congress.

It is a shame Caunte was only a King and not also a doctor.

In both cases man errs becuase he interferes with the Laws of Nature. How do "intellectuals" miss that basic fact?