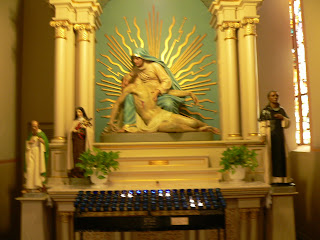 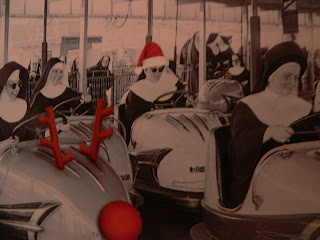 The workshop I have attended on the new English translation of the Mass is over. It was quite good and I can't wait until the First Sunday of Advent 2011 to implement it, although I'll be a year older by then, and certainly many pounds wiser.

What most of the priests here are saying is that it will help us to bring about the authentic liturgical renewal envisioned by Sacrosanctum Concilium of the Second Vatican Council. It will return us to a more formal approach to God in prayer and worship and the reverence due him from us! Somehow and this is really unbelievable to me, we as Catholics lost the profound sense of the sacred that we are noted for as Catholics especially in our worship. The prayers were simplified and lost so much of their dignity that was and is in the current Latin.

In the late 1960's, the Vatican approved a method of translating that allowed not for a literal translation, but for one of equivalancy. So the Mass we have in English today is actually a "dumbed down" paraphrase of the original Latin, lacking precision and beauty.

That's all changing and for the better with the new translation based upon a literal translation of the Latin, not in an obsessive, unbendng way, but in a way that keeps the dignfied character of the Latin Mass in English. This is a result of a Vatican Document shortly after the turn of the century that required translators to use a literal model of translating the Mass. Paraphrased English Mass are out as well as dumbed down simplicity and outright irreverent, non sacral, non-self depracatory language. There's a lot of self-depracating in the new English and this puts us in our place before God! That's a huge step forward.

But not all is well with the world. I fly back to Atlanta tomorrow amidst the terror threats in the skys, suspicious packages with explosive materials. I guess security will be high at the airports! Thank God for the Holy Sacrifice of the Mass that enables us to enter into the only means of salvation from sin and death, the passion, death and resurrection of our Lord and Savior, Jesus Christ. Praised be Jesus Christ now and forever.

My last supper in San Antonio will be Tex/Mex. Yum!
Posted by Fr. Allan J. McDonald at Friday, October 29, 2010

How and when does this take effect? Will it be optional or required? Are there any options in the wording?

rcg, it takes effect on the first Sunday of Advent 2011, a little more than a year from now. It will be required but who knows how various priests and parishes will implement it. There are some options for the penitential rite as we currently have. I haven't seen them, but there will be additional penitential rite in the appendix, not the main body of the missal, the type like, Lord Jesus you came to call sinners, Lord have mercy...etc
It seems to me that there is not the encouragement to use "these of similar words" as the current sacramentary does. But I could be wrong. (This is particularly bothersome in the introductory rite of the mass when a sermon is almost given before we are called to recollect our sins and trust in God's mercy. There is not a second choice for the open collect as there is in the current sacramentary, there is only one, the one that is translated from Latin. The second choices we have currently are horrible for the most part and new constructions for English. Mercifully these are gone!

Everyone saying how great the new translation is might be thinking it's the one approved by the bishops in 2008. But the version that came back in 2010 is very, very different. Looks like Rome is going to step in and fix 2010's biggest mistakes, among which are mistranslations, violations of Liturgiam authenticam by the unknown "revisers," and countless errors in English grammar and syntax. There were so many problems that a report was prepared by ICEL and BCDW for Rome to alert them. There's a whole running commentary on this on other blogs. So much for the competence of Vox Clara who are the ones who make all the recommendations to CDW on revisions. The poor Pope: rebellion on the left, incompetence on the right.