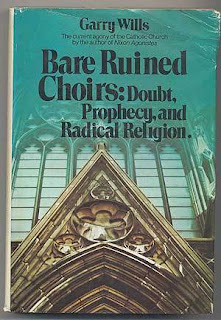 My previous two posts are related to this one as well. Fr. Andrew Greeley who is a controversial figure in the Church and not always a friend of the clergy and hierarchy in his criticisms directed our way, does believe that the loss of the traditional understanding of mortal sin as leading to the possibility of hellfire and damnation contributed to the phenomenon of Catholics no longer believing that it is a mortal sin to miss Mass. If you are not going to go to Hell for missing Mass, why go? Even appealing to a higher moral response such as suggested by the infamous Fr. Hans Kung, that one should want to go to Mass for one's love of God rather than the fear of damnation doesn't motivate the nearly 70% of Catholics who today who do not attend Mass regularly, after a very steady decline from the early 1960's of almost 90% of Catholic who did attend Mass. Fear of hell has its place within Catholicism and some Catholics. And if you don't have the fear of hell, the proper understanding of sin in general and mortal sin in particular, you then have 70% of Catholics on any given Sunday not attending Mass!

My contention is that in the early days of the post Vatican II, spirit of Vatican II cultural revolution in the Church led by a very profound and corrupted clericalism both in Holy Orders and Religious Orders, that the true meaning of Vatican II was hijacked and something else altogether detrimental to Catholic identity and culture was substituted. It is not too far fetched to accept Pope Paul VI's evaluation that the "smoke of Satan" had entered the Church of this period.

The loss of the sense of sin was fomented by clergy and religious who had over the past century earned the respect and admiration of the laity. The laity were authority oriented to the hierarchy in the areas of faith and morals and to miss Mass intentionally on Sunday was understood precisely as the Church taught, an personal act of the free will to disobey God and His precepts which thus had consequences, similar to taking a gun and pulling the trigger. The only antidote was the Sacrament of Penance or confession. It is no wonder then, that even the Sacrament of Penance has suffered a decline in those who make use of it since those days when clericalist priests, nuns and brothers distorted the true teachings of the Church and the true message of Vatican II.

The outright disobedience of the clergy and religious of the immediate post-Vatican II period and the power these renegades still had over naive pre-Vatican II Catholics encouraged many in the rank and file laity to openly question their faith, disagree with the Church in the areas of sexual morality, in particular the ban on artificial birth control and to make decisions of conscience independent of clear Catholic moral principles in variety of areas with no fear of actually committing a mortal sin if one's decision of conscience went against the faith and morals of Church teaching. This is a rather profound theological and sociological shift. Now, today, you have this same clericalism in some priests and nuns who suggest that it is not a sin to advocate for same sex marriage, procure an abortion, sanction fornication between heterosexuals or homosexuals, and disregard the Holy Father in terms of him having no authority whatsoever to ordain women into Holy Orders. Outright disobedience and advocating such for the laity is the hallmark of the fruit of the post-Vatican II revolution based not on what Vatican II actually taught, but what this renegade clericalism in the Church wants to dictate and the authority they wish to usurp.

When smaller issues of Church law were changed, such as relaxation of the Lenten fast, and Friday abstinence from meat, many Catholics both clergy and laity of an immature variety took this to mean that something that once was considered a mortal sin damning someone to hell, like eating a hot dog on Friday, was no longer a mortal sin and thus there was an injustice in the concept of mortal sin if all those hot dog eating Catholics prior to the change of law were still in hell. Mortal sin and its consequences went out the window.

Never mind that in the second grade in 1960, Sister Angela made it clear that going to hell because of eating a hot dog on Friday was not because of the hot dog, but the act of disobedience to the legitimate authority of the Church and the common penance that we were to do on Fridays in honor of the Lord's death on the Cross. She made it clear that when our mommy or daddy told us that we were forbidden to go outside and play and we did none the less, that the sin wasn't that we went out and played, playing is not a sin, but that we went out and disobeyed our mommy or daddy! We got it. Why didn't these adults get it?

Try telling a modern priest or nun that he or she should teach the concept of sin, in particular mortal sin to his or her students. They'll laugh in your face and say that you are so pre-Vatican II, the highest insult one can hurl against an orthodox Catholic, in their minds at least!

So the wholesale disregard for traditional Catholic morality, the triumph of the individualization in making moral choices in our Catholic culture, the lack of awareness of the need to attend Sunday Mass was caused in large part by the cultural revolution of the post-Vatican II spirit of Vatican II corrupt crowd which was not intended by the actual fathers of the Second Vatican Council or their particular documents, but by Vatican II hijacked by extremist, renegades in the Church in the clergy and religious life, the ultimate act of a corrupt clericalism. We are still experiencing the sins of these fathers and sisters to this day, three generations later.

Causality is certainly associated with the unintended, adolescent revoltuion in the Post Vatican II Church led by a clericalism mentality that has had a trickle down effect to this very day. I stand by my assertions!

Very good post. I am a critical listener at mass and try to follow the readings to discern their relationship and lesson. So during the homily I am trying to either sense that link, or if there is none, what the point is as it affects my faith. In most cases I come away with two points: our lives are sad and we have only the hope of God's pity in the next world, and that Christianity and Catholicism are a choice no different than any other that claims to worship God. This plainly says to me that we are trying to trick God into living up to his mercy and forgiveness promise regardless of our own actions.

rcg,
What do you mean by these statements?
"..our lives are sad and we have only the hope of God's pity in the next world, and that Christianity and Catholicism are a choice no different than any other that claims to worship God."

The cultural revolution that swept over the world in the 1950's through early 1970's affected everyone. I mean everyone.
Religious and laity both. Of all nations and religions.

The Catholic Church is not the only religion to have experienced such a great 'deconstruction'. It happened in non-Christian religions in the far corners of the earth also.
As someone who has traveled to those far reaches, I have seen it with my own eyes; and I have seen that those areas are also now experiencing a return of the too-far-flung pendulum to a healthier position.
Now, if anyone doesn't think that the Catholic Church is vulnerable to the secular world, they're just dead wrong. Also, if anyone doesn't think that the Catholic Church is the global spirtual leader of all earth's religions and peoples (even athiests) is also dead wrong.
So I stand by my assertions that the coming together of all the Rites of the Church in the setting of a fixed Easter date would have wonderful worldwide ripple effects-as I commented in a previous blog entry.)
When it comes to human behavior, cause and effect are multifactorial, unlike in some hard sciences where cause and effect can often be clearly connected. (One might say that it is in searching for those clear cause/effect relationships that God often uses science to allow us to discover certain aspects of Him).

For Philosophy Student to even bring up a cause/effect issue here simply displays that he/she still needs to study a while. Yet, it does make for good blog debate.

It's a no brainer...anyone who has observed human behavior can tell you that the reasons articulated in this blog about Catholic behavior are spot on.
While all the reasons Father states are true, they are not the only reasons; but they are the Catholic reasons.
It's my assessment that Father isn't trying to give a dissertation on ALL the reasons, just a focus on the Catholic reasons for the 'deconstruction' of the Catholic Church and the laxity of the laity.

Once one understands how the 'deconstruction' of the Church happened and it's subsequent effects, then one can set about remedying it. Which is precisely what the Catholics Come Home campaign is doing, and which is exactly what Father and others who are returning to teaching the basics/fundamentals of the faith are doing.

On Understanding: In order to truly understand a topic, one has to learn about and think about and evaluate all sides.
It sure would be nice if Philosophy Student, Pater Ignotus, and the like would actually do that; and then come back and tell us about their new improved understanding.

Hey, every once in a while a snowball does have a chance in Hell...

SL, that is my understanding of the message, not my own thoughts. Our problem is that we take pride in our sins and not ownership. Being told that a great deal of our condition is the result of our personal action or inaction hurts because we are prideful and don't like to be mistaken. If we will, alternatively, take ownership of the sin and subsequently take action against it forgiveness is nearly instantaneous.

Take glutony: no one wants to be told they are fat. Being fat in itself is not a sin but denying it and continuing the associated behaviour is. Confront it, attack, maybe fail; but give it a stand up fight and make the Maker happy with your efforts. That is all a mortal can do.

I think we need to hear more fire and brimstone talk coming from the ambo. In this 'feel-good' society that we live in, it's imperative that people are reminded of the consequences of their actions. One of our priests likes to say: 'Who told you being Catholic is easy? It's not. If you don't like it, there's the door!' It might be a bit harsh, but it gets the point across.

Personally, I don't understand why anybody would choose not to receive our Lord in the most holy sacrament of the Eucharist.

You see, I see it, a large percentage of Catholics see it, but why doesn't the Pope and his bishops address it forcefully? Better to lose 50% of the "Catholics" and be left with a faithful remnant to call the lost back to the holy Mother Church.