EVEN IN DEATH, AGING MODERN LITURGISTS, ARROGANT AS THEY ARE, SIMPLY NEVER DID AND NEVER WILL GET IT! BUT A NEW GENERATION WILL RISE UP AND GET IT! 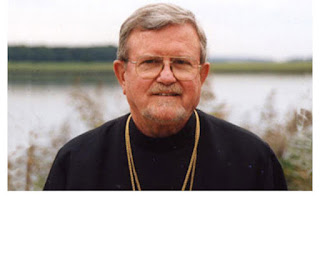 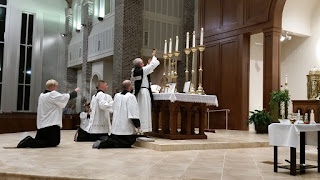 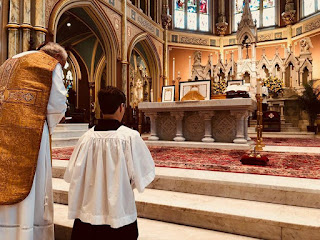 Last night at our All Soul's Requiem in the Ancient Form, we had about 150 souls present on a Friday night! And of those 150 I would say the majority were in their 20's. But the number of children and teenagers was unbelievable! And so was the reverence!

The Cathedral Schola of about 14 or so were comprised of men and women no older than 25 or 26 years old! They are splendid, although the Cathedral acoustics are much better than ours---they put acoustical padding throughout St. Anne! Sad! But it is great for the spoken word!

I write this to show you an interview Praytell did with a Jesuit liturgist (an oxymoron if ever there was) about four years ago the now late Fr. Robert Taft SJ.. He recently died. Eternal rest grant unto him O Lord and may perpetual light shine upon him. May he rest in peace. Amen. And may his soul and the souls of all the faithful departed rest in peace.

Here are the money quotes from the Praytell interview. Very sad, no? But he was my age, probably much older and thus it truly fits:

My comments in red:

Three things to fix the liturgy — what would they be? The liturgy doesn’t need fixing. For starters it just needs a translation into something remotely resembling English.(typical praytell snarkiness! Do you ever hear anyone in the pews complaining about our new and glorious English translation of the Mass????)  What needs fixing are the celebrating clergy. ( I agree, but probably not in the way he means!) What I have often said of my own Jesuit confreres applies here too: all Jesuits have studied theology, but not all of them learned theology—i.e., learned how to think theologically. A classic instance is the question of the clergy’s refusal to cease giving communion from the reserved sacrament in the tabernacle despite the Church’s constant exhortations and orders to do so. That is not because the clergy are disobedient,but because they are theologically and liturgically ignorant, as I have tried to show in Worship 88/1 (pp. 2-22). (Okay, this has to be the most horrible thing happening in the new order of the Mass, simply horrible, worse than a horror show, worse than anything Cardinal McCarrick has ever done--simply horrible, fix that and you fix the Church!)
Pope Francis good for liturgical renewal or not? Papa Francesco is good for everything, including liturgical renewal. (Keep in mind this was four years ago. Today the Church is as polarized as it was during the Protestant Reformation and the immediate aftermath of Vatican II and the Springtime well predicted by those of his age and older still hasn't come but winter seems here to stay!) When he first celebrated Mass in the Sistine Chapel he had them toss out the altar facing away from the congregation that his predecessor had installed, and thereby gave the signal indicating how he rated the reformed Vatican II liturgy vis-à-vis the restored pre-Vatican II Summorum Pontificum “extraordinary form.” (He must have had a heart attack when Pope Francis celebrated Mass a few times ad orientem not only in the Sistine Chapel but other chapels too!!!!)

Is the Vatican II liturgical renewal secure or endangered? I think it is secure, because I believe the vast majority of Catholic people throughout the world confirm it by voting with their feet and going to Mass in the reformed rite, showing thereby that despite the right-wing neo-con wackos (hereafter NCW’s), most Catholics prefer the reformed rite. (In Holland I think the vast majority of the 5% of Catholics who actually attend Mass would agree! It is all a matter of perspective isn't it? What is endangered today is the Church herself especially the OF version of it!)

Anything good coming out of Summorum Pontificum? Nope, unless creating unnecessary divisions in the Church and driving crazy our harried bishops who have too few priests to start with and now have to try and accommodate the NCW’s is considered “good.” (This poor soul was really out to lunch, as though other issues like philandering priests and homosexual priests abusing adult and teenagers males wasn't divisive and harrying enough, not to mention covering it up and participation in some of it by some of the bishops. Yah! Summorum Pontificum was and is a real challenge.  Let me get my violin out! What rubbish!)

(This poor soul was really out to lunch, as though other issues like philandering priests and homosexual priests abusing adult and teenagers males wasn't divisive and harrying enough, not to mention covering it up and participation in some of it by some of the bishops. Yah! Summorum Pontificum was and is a real challenge. Let me get my violin out! What rubbish!)

I hope no one speaks or writes as uncharitably about you 3 days after your death as you have written about Fr. Taft. Shame on you.

"Father" Taft was a guest lecturer at my Eucharistic Theology Class at Notre Dame in the 1970s. He was a left-wing loon, a non serious lecturer, and even back then (because I was properly trained in the Faith) I instinctively disregarded the nonsense he was peddaling. Only simpletons would buy what he was "teaching." I was also exposed to another fake catholic in this course, Tad Guzie, SJ. Of course the Pray Sniff crowd would love him and Tad.

Shame on you, too, Tee Jay Emm. Father Taft was an ordained priest, regardless of your highly jaundiced opinion. His ordination notwithstanding, your uncharitable tirade is precisely why 99% of Catholics want nothing to do with your perverse traditionalism.

Enjoy you bile banquet. No one else does.

I do not take kindly to glib priests mocking my religion, so I call them as I see them. The bile is coming from them. You must recognize by now that you are no longer the big men on campus, as many of us are now on to the game of clericalists like you. Being ordained does not give you a license to mock, distort and lie about the Faith.

I know 'de mortuis nil nisi bonum' is something of a cliché, and Archdeacon Grantley, referring to the recently deceased Mrs Proudie, regarded it as 'humbug'.

Taft would have known before he died that his theories were looking increasingly threadbare. There's no need to put the boot in now he's gone.

TJM, I hate glib priests that mock the Faith as well, but I see them as being in the highest positions of the Church and surrounding Francis and being promoted by Francis.

I hope your right.

"I do not take kindly to glib priests mocking my religion,..."

Tee Jay Emm - It's not "your" religion. It is ours. Mine as much as yours or anyone else's. So you can get over this ownership/control notion.

"You must recognize by now that you are no longer the big men on campus,...

But that was never my intention. YOU may see it in Zero Sum terms - "I Win You Lose" (the "Big Man" wins, don'tcha know). I don't see it that way nor does Holy Mother Church. My task is to be faithful, not to win, not to please you.

"Being ordained does not give you a license to mock, distort and lie about the Faith."

Neither does being a lay man give you that right, yet you mock the Holy Father, you mock the bishops who disagree with you, you mock the priests who call out your arrogance and folly.