FORMER SECRETARY OF STATE, JOHN KERRY DEMONSTRATES THE SANITARY, NONCOMMUNICABLE OF DISEASE WAY TO RECEIVE THE "PRECIOUS BLOOD" AS WELL AS THE REVERENT WAY TO DO SO, KNEELING WITH OTHER COMMUNICANTS AT THE ALTAR RAILING! 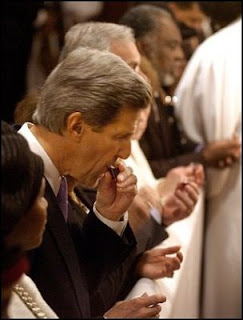 Who does the purification on that disposable little chalice and why isn’t it made from a suitable material (aka precious metal). It does not seem to be a proper way to receive the Blessed Sacrament. I think only the priest should handle the Chalice, and that Chalice should be properly constructed of suitable material as described by emeritus pope Benedict.

Gene, right on. I knew Kerry was a faux catholic when he referred to Pope Pius XXIII when tauting this catholic bona fides

Was this, in fact, in a Catholic church? My guess is that it was, rather, in a Protestant church. How I respond to this hinges almost entirely on that missing datum.

Only someone with no faith in the real presence could stomach this. If you've seen how these little cups are carelessly spilled and thrown around in Protestant communions, you would be horrified if you believed this was the whole Christ in every drop

Fr. Fox, as far as I can tell, it is a Protestant service. It is a "baited" post by me and on several levels.

First, Protestants who don't believe in the real presence, have for the most part preserved their pre-reformation practice of kneeling at a communion railing for their version of Communion. There's something ironic in that.

Secondly, the Catholic John Kerry, is receiving Communion, kneeling in a Protestant Church when he, of course, is not allowed to do so by our canon law.

Thirdly, the small cups for their communion is odd to me and remains odd and I would not want it for the Catholic Mass as purifying them properly would be a nightmare.

Lots to talk about in that photo, no?

JK kneels to receive wine, does he kneel to receive the Eucharist? I hope so, otherwise he could be accused of worshipping Dionysus instead of Christ.

Yes, indeed, a lot to talk about. So, you asked for it!

- You are, of course, correct that Mr. Kerry must not do what he is doing. It is important to explore why. Off the top of my head, I propose three reasons. First, that it fosters indifferentism: "Real Presence, or just a symbol? (Shrug; gulp)."

Second, that it denigrates the Holy Eucharist and the Catholic Church. If you truly believe that the Eucharist is truly Christ, and truly the fruit of his all powerful sacrifice, then what is you think you are doing when you receive any other sort of communion or "Lord's Supper"? It is incoherent.

And here is a third reason that gets overlooked: it can be insulting to the denomination whose ritual you participate in. A proper response would be to say, "Look, this ritual is a very serious business, and I respect your church -- to which I do not belong, and whose tenets I do not subscribe to -- too much to treat this is some sort of snack or after-dinner mint. Until I'm ready to subscribe to what you believe, I should not participate."

- About Mr. Kerry, I can see none but two alternatives: he does not know, or he does not care. In charity, I opt for the former; and I think that is quite likely. He belongs to that generation that went through those heady days of the 60s, who very frequently will say of almost any Catholic teaching that proves inconvenient: "Oh, that all went out with Vatican II." And however incoherent that idea is, it has gained a great purchase in many minds, including otherwise bright people. (I don't know that Mr. Kerry is particularly bright. I think he is well born and well bred.)

- I find myself wishing Bill Buckley were still around, because he is probably the only journalist who could be hoped for to ask Mr. Kerry about something like this, and really drill into the subject well. Raymond Arroyo would too, but Mr. Kerry wouldn't be caught dead in the same county as EWTN, I think.

Monsieur "Don't you know who I am" Kerry, proclaimed by the media to be brilliant, but they shut up when they learned George Bush had higher grades at Yale than Kerry!

I have been ften wondered about the respct angle. Sometimes people get offended if my wife and I don’t participate at a wedding, I try to explain that I would be disrespecting their commitment. Sometimes it works.

I wonder, Fr Fox, if Secretary Kerry is and example of both ‘A’ and ‘B’ in that he thinks he inows and refuses to learn. A form of invincible ignorance?

It is a chalice if it is the precious blood. It is a cup if it is just wine.