The first point of discussion would be for Catholics who prior to Vatican II had attended Mass celebrated as in the first photo and then after Vatican II were introduced to the Mass as celebrated in the second photo. How would this affect them?

The second point of discussion is if someone who wasn't Catholic attended Mass as in the first photo and then the next Sunday Mass as in the second photo, what do you think there comments would be in terms of describing the two? 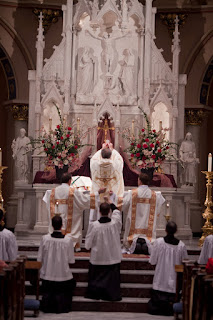 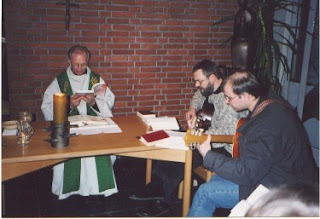 My only complaint about the second is that it's not like the first.

Anonymous, even in the Mao regime in the 1950s, I have every confidence that they would do all they could to make the Mass dignified. Even in the most horrendous of circumstances, all the old images and videos of Masses I've seen from before the Council—such as Masses on the hood of a Jeep, or in a bombed out cathedral—were still very carefully and, indeed, beautifully, executed. The bottom photo is not.

Like millions of Catholics exposed to the reality in the second photo, they yelled in desperation "Stop the bus and let me out!" Turns out the bus broke down and had to stop, so they calmly left and never back.

I think the reality of the situation as a result of picture 2 has just kicked in, hence Cardinal Sarah's comment that there should be "More Christ, less entertainment at Mass", but unfortunately I think it is already too late.

What to do about it? A lot more prayer is obviously needed and divine intervention because what has happened to the Church is now bigger than any of us and we are only scraping the surface in trying to patch up and mend what is badly torn and broken. I just don't know why more wasn't done in the last 40 years. A big foot needed to be put down to stop the rot. The statement Cardinal Sarah has made is at least 40 years too late, though. There is no point crying over spilt milk any nore - it's a case of getting back to the basics and teaching the faith to the little ones and building up and restoring where we can and where there is a willingness to admit that something is seriouslg wrong.

The remarkable thing is that both photographs show the Novus Ordo. Anyone brought up before V2 would see continuity in the first picture and rupture in the second, the more so if the first celebration were in Latin. The second reminds me of the school Masses I usually found an excuse not to attend when I taught in a Catholic school in the 1980s.

Most children would be more exposed to what is happening in the bottom picture, and on leaving school would probably lapse. I also think it says a lot about Paul VI's Mass which appears to be not so much a rite as a template for any number of options. So in a broader sense there is a similarity between the two; it's just that different options have been chosen.

A Mass according to the 1962 Missal would look similar to the first picture, but there would be one significant difference - it would look this way because the rubrics specify it, not because the celebrant had made his own choice from the options on offer.

But John, certainly the priest in the second photo is doing something which no option allows, and thus, presumably, this same priest might celebrated the EF Mass in the same way with a guitar by his side strumming the chants of the Mass if he made it high. But since he's willing to break the rubrics the EF Mass while in form maintained would look like the second picture.

There might have been liturgical 'creativity' before V2 but it was confined to a few avant-garde institutions. What abuses is the priest in the lower picture committing? There is nothing in the GIRM that says he must wear a chasuble. Indeed, the 'cassock alb' with broad stole is quite commonplace in less solemn celebrations. Altars can resemble wooden tables and frequently do. There is a crucifix near the altar (it's on the wall) and at least one candle. He's joining in with the singing of whatever it is; this is not only allowed but encouraged. Guitars are also encouraged (go to the section on music produced by the liturgy office on your Bishops' Conference website if you don't believe me).

This is a legitimate adaptation to circumstances and perfectly licit. Yes, it's dreadful and I would avoid it like the plague, and would be accused by a certain priest on this blog of looking for an excuse to 'skip mass' or trying to impose my personal tastes on others.

The EF Mass has precise rubrics and directions which do not permit these options.

Everyone seems to be missing my point although it is theoretical. The EF Mass is now celebrated freely by those priests who choose to do so. I'm not speaking about pre-Vatican II times and potential abuse. I am speaking about today, that a priest today could do the same thing to the EF Mass that the second photo priest does to the OF Mass. He doesn't give a damn about rubrics or the GIRM or anything else which the OF Mass has and doesn't allow for what we see by no stretch of the imagination--but the priest could care less.

So, a priest today who wants to do something like this with the EF Mass will do it.

Give me one instance where a liberal priest has taken to celebrating the EF Mass in order to abuse it. A few years ago in England a priest 'tried it on' by celebrating the EF with a female server; the LMS was quickly on to it and the PCED ruled it was illicit.

If you like the sort of thing shown in the bottom picture you can get away with it since the NO rubrics are rarely prescriptive and the options are many and varied. The EF has to be rubrically correct, it has to be in Latin, and there are very few options. The liturgical abuses and excessive creativity of the 1960s may have predated the Novus Ordo but the progressives took their cue from V2 and the fact that as early as 1964 the Mass was being radically altered.

I agree largely with what John Nolan says but, interestingly, I read a couple of years ago in a letter from Japan that because the Japanese have difficulty learning Latin the Traditional Mass has on occasion been offered in Japanese and not in Latin. So there must be some way to get around that rubric.

Looking at their site there does appear to be a little inculturation at play as well ...

Jan, a few months ago I posted on this site a fairly long extract from a priest who worked in Japan and who saw that the imposition of a largely verbal liturgical culture (that is to say, what has prevailed in the West since V2) on a society which has always valued ritual, in the name of 'inculturation', was both misguided and counter-productive.

Regarding Latin it is interesting to observe that the Japanese know English to the extent that in Continental Europe they have adopted English signage less for the benefit of British and American visitors than for that of Japanese (and increasingly Chinese) tourists. English is heavily Latinized and a Japanese would find Latin less of a problem than would (say) a Pole or a German whose languages have few Latin cognates.