NOW THAT GERMANY IS BECOMING A SMALLER CHURCH IN NUMBER, PROGRESSIVES WHO ONCE HATED POPE BENEDICT FOR HIS "SMALLER BUT PURER CHURCH SENTIMENTS" ARE NOW APPLAUDING HIM--LEFT LEANING HYPOCRACY? 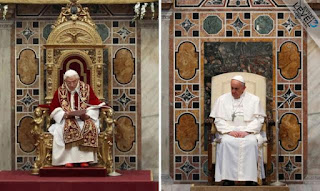 Praytell, not known for being fair and balanced and paranoid at the good sense of conservative and traditionalists' comments to the point of now banning them altogether (and thus their blog has become as boring as hell and banal as MSNBC and CNN, compared to FOX), is praising Pope Benedict for his "smaller but purer Church" sentiments offered a few years ago in light of the fact that the Church in Germany has seen an exodus of more Catholics since Pope Francis than during Pope Benedict.

Of course Praytell from the editorial point of view as well as posts and comments derided His Holiness for it but seems to have a change of heart now (metanoia) and offers glowing adoration for His Holiness' comment as it concerns Germany:

"...My only point is that it is possible for two things to happen at the same time – that more people are officially leaving the Church (in Germany), but those remaining are increasing their engagement in the life of the Church.

If this is happening, it would be a confirmation of the insight of Pope Benedict XVI that the church of the future might be a smaller, purer church. He was oftentimes misunderstood for expressing this – some thought that it was his goal to shrink the church and drive out the impure. I’m pretty sure he meant, rather, that the institutional church will shrink because of the secularizing forces of our society, whether we like it or not, but this is a call for committed Christians to strengthen their commitment and engagement, whether the church is large or small. Benedict was offering us a prediction and an invitation.

Be that as it may, let us all hope and pray that Catholics in Germany and everywhere else are increasing their church commitment, whatever their numbers may be. Let’s pray also that we can ratchet down the divisiveness round the upcoming synod and respect all the voices seeking to discern the Lord’s will for his church. I think that would mean not discrediting people’s arguments on the basis of the alleged health of the church in their homeland..."

Benedict was talking about the historical effect of persecution.

Anyone who has pruned vines knows that the vine left over from the cutting and pruning process is much, much smaller than what it looked like before. Smaller but much healthier. Most are astounded how quickly the pruned vine (or rose bush) will explode with new, fresh life once this rather painful and alarming surgery has taken place.

The Church in England under Elizabeth and Cromwell became much, much smaller and 'purer'. Ditto in France under the following the Revolution. The Polish Church was decimated by the Nazis and Communists... as was the Church persecuted in Mexico.

In every historical case I've looked into where a regime unleashed open, legal, bloody persecution against the Church in the name of 'national security', the number of bishops, priests, religious, and active laity were cut in half or more. But in every case, the Church survived albeit smaller and 'purer'.

Pick your country outside of the English speaking world since 1830 and you'll see this is the case.

We can either prune ourselves or be pruned. But we ARE going to be cut. No one gets to heaven without wounds.

A Traditionalist Catholic and a Progressive Catholic were seated next to each other on a plane. As soon as they figured out what the other one was they began to argue until the stewardess threatened to call the Air Marshal if they did not be quiet. So they fumed in silence until, suddenly, an alarm sounded, the oxygen masks dropped from the ceiling and smoke began to fill the cabin. The stewardess noticed that both men were laughing hysterically and asked them why. The Traditionalist and the Progressive pulled the oxygen masks from their faces, pointed to each other and said, "he's going to die!"

The picture on the right reminds me more of Jesus than the one on the left.

"The picture on the right reminds me more of Jesus than the one on the left."

Perhaps our next Pope will stand. People will say..."Finally, we have a humble Pope. Our last Pope actually sat comfortably."

The next Pope will sit on the floor..."Ah, now we have a Pope who is humble. Our last Pope was so arrogant that he stood. He should have humbled himself by having sat on the floor."

The next Pope will sit outside on the grass..."Finally, we have a humble Pope. Our last Pope sat indoors on the floor in climate-controlled comfort."

The next Pope will sit in dirt..."Finally, we have a humble Pope. Our last Pope sat on soft grass."

The next Pope will sit on garbage. "Finally, we have a humble Pope. Our last Pope was so arrogant that he sat on dirt rather than garbage."

Or...The next Pope will sleep outside in a tent. Our last Pope was so arrogant that he slept in a guest house/hotel."

The next Pope will sleep in a sleeping bag. "Finally, we have a humble Pope. Our last Pope slept in the comfort of a tent."

The next Pope will sleep on the grass. "Finally, we have a humble Pope. Our last Pope slept in the comfort of a sleeping bag."

The next Pope will sleep in dirt. "Finally, we have a humble Pope. Our last Pope slept on clean, soft grass."

It is amazing that to this day, Pope Saint John XXIII is hailed as a tremendously humble, down to earth Pope.

Imagine the outrage among certain folks should a Pope ever copy Pope Saint John XXIII's ways!

Dear Father, if you should post my previous message, I wish to make clear please the following:

I do not suggest that it is His Holiness Pope Francis who wishes to portray himself as the Pope whose humility has surpassed the humility of previous Popes.

It is other folks who have pitted Pope Francis versus, for example, Pope Benedict XVI, in regard to humility.

I simply wished to employ a bit of humor (while attempting to make a point) about Popes and humility.

I believe, for example, that Pope Francis is humble. I also believe that Pope Saint John XXIII was humble.

I believe that a Pope may possess great humility while he is carried aloft, crowned with the Triple Tiara, driven in a Mercedes, and offers the TLM in all it's holy spendor.