THE BOMBSHELLS KEEP COMING! THIS ONE IN SAVANNAH,

The Tybee Island B-47 crash was an incident on February 5, 1958, in which the United States Air Force lost a 7,600-pound (3,400 kg) Mark 15 nuclear bomb in the waters off Tybee Island near Savannah, Georgia, United States. During a practice exercise, an F-86 fighter plane collided with the B-47bomber carrying the bomb. To protect the aircrew from a possible detonation in the event of a crash, the bomb was jettisoned. Following several unsuccessful searches, the bomb was presumed lost somewhere in Wassaw Sound off the shores of Tybee Island. 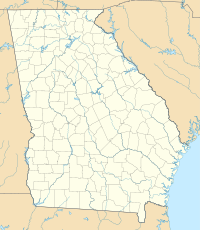 Atlanta
Georgia
The B-47 bomber was on a simulated combat mission from Homestead Air Force Base in Florida. It was carrying a single 7,600-pound (3,400 kg) bomb. At about 2:00 AM, an F-86 fighter collided with the B-47. The F-86 crashed, after the pilot ejected from the plane. The damaged B-47 remained airborne, plummeting up to 18,000 feet (5,500 m) while Major Richardson regained flight control.[1][2]
The crew requested permission to jettison the bomb, in order to reduce weight and prevent the bomb from exploding during an emergency landing. Permission was granted, and the bomb was jettisoned at 7,200 feet (2,200 m) while the bomber was traveling at about 200 knots (370 km/h). The crew did not see an explosion when the bomb struck the sea. They managed to land the B-47 safely at the nearest base, Hunter Air Force Base. The pilot, Colonel Howard Richardson, was awarded the Distinguished Flying Cross after this incident.[2]

Some sources describe the bomb as a functional nuclear weapon, but others describe it as disabled. If the bomb had a plutonium nuclear core installed, it was a fully functional weapon. If the bomb had a dummy core installed, it was incapable of producing a nuclear explosion but could still produce a conventional explosion. The 12-foot (4 m) long Mark 15 bomb weighs 7,600 pounds (3,400 kg) and bears the serial number 47782. It contains 400 pounds (180 kg) of conventional high explosivesand highly enriched uranium.[3] The Air Force maintains that the bomb's nuclear capsule, used to initiate the nuclear reaction, was removed before its flight aboard B-47.[4] As noted in the Atomic Energy Commission "Form AL-569 Temporary Custodian Receipt (for maneuvers)", signed by the aircraft commander, the bomb contained a simulated 150-pound cap made of lead.[5]But according to 1966 Congressional testimony by then Assistant Secretary of Defense W.J. Howard, the Tybee Island bomb was a "complete weapon, a bomb with a nuclear capsule," and one of two weapons lost by that time that contained a plutonium trigger.[6][7] Nevertheless, a study of the Strategic Air Command documents indicates that in February 1958, Alert Force test flights (with the older Mark 15 payloads) were not authorized to fly with nuclear capsules on board. Such approval was pending deployment of safer "sealed-pit nuclear capsule" weapons that did not begin deployment until June 1958.[8]
If a nuclear detonation had occurred, the possible blast effects would include a fireball with a radius of 2 km and thermal radiation causing third degree burns for ten times that distance.[9]

Starting on February 6, 1958, the Air Force 2700th Explosive Ordnance Disposal Squadron and 100 Navy personnel equipped with hand held sonar and galvanic drag and cable sweeps mounted a search. On April 16, the military announced the search had been unsuccessful. Based on a hydrologic survey, the bomb was thought by the Department of Energy to lie buried under 5 to 15 feet (2 to 5 m) of silt at the bottom of Wassaw Sound.[4]
In 2004, retired Air Force Lt. Colonel Derek Duke claimed to have narrowed the possible resting spot of the bomb to a small area approximately the size of a football field. He and his partner located the area by trawling in their boat with a Geiger counter in tow. Secondary radioactive particles four times naturally occurring levels were detected and mapped, and the site of radiation origination triangulated. Subsequent investigations found the source of the radiation was natural.[10]

To date, no undue levels of unnatural radioactive contamination have been detected in the regional Upper Floridan aquifer by the Georgia Department of Natural Resources (over and above the already high levels thought to be due to monazite, a locally occurring sand that is naturally radioactive).[11][12]
Posted by Fr. Allan J. McDonald at Monday, August 10, 2015

On the day of my birth, no less. There were two disturbances in the Force that day....

Here, look at this: http://meyerweb.com/eric/tools/gmap/hydesim.html

Plug in Tybee Island and type in 1000 KT and you get the calculation for how large the destruction would be if that bomb goes off.

Of course, it's not buried in the sand on Tybee island itself and is probably under 50-100 feet of mud in 30-50 feet of water so the explosion would be 'muted' a bit and most fallout would blow over the Atlantic. But the overpressures would be sufficient to rattle or break most windows as far away as Pooler.

The mushroom cloud would be high enough for almost everyone in the city of Savannah to see if (unless there was fog or a thunderstorm over the city at the time with low cast cloud cover).

Everyone would know what happened.

Incidentally the calculator can be scaled to the common SLBM of Russia (250 kt range). If Hunter or Ft. Stewart got nuked it's "theoretically" possible for most people in old town Savannah to survive the blast. Nukes are terrible but outside of the big Megaton monsters of the cold war, modern nukes' accuracy and lower yield do make them more survivable for those of us who don't live or work in an immediate target zone.

If the Tybee monster goes boom we'll know it, but it won't obliterate the city.