PRAY TELL, WHAT IS THE MOST IMPORTANT PART OF A BLOG? 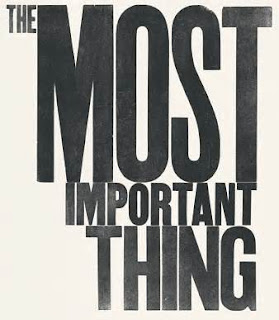 I would think that for an academic blog (which this one isn't) that the actual post would be the most important part of the blog. When comments are allowed (not all blogs allow them) the comments would be secondary. One would know the ethos and direction of the blog by its original content which is controlled by the blogger administrator.

Comments would reflect a diversity of opinion and not necessarily that of the blogger. Comments need moderation as people get into it with each other. There needs to be civility. But the comments are not the most important part of a blog although they might be the most interesting. The original post on which comments are made is the most important.

Praytell blog has had a survey about its blog and it might change some of its content to either go to the center (it certainly isn't now) more to the left, which would be a disaster, or a bit to the right.

They can control their posts and should be able to do what they want. But  they are dismissive of many legitmate comments because they are irked at the fact that in 2007 Pope Benedict brought a change to the Church, not as dramatic as the Second Vatican Council's changes, but a big change nonetheless. They are like pre-Vatican II Catholics who can't cope with change in the Post Vatican II period. The change you ask? He allowed unbridled celebrations of the Mass as was normative prior to the Council.

Silly progressives and let's call them this, who deride conservatives who can't cope with post-Vatican II changes in the Church (I'm speaking of the authoritative legitimate ones, not the silly innovations and abuses after Vatican II) are in the same boat with those they deride. They can't cope with the change that today the normative post-Vatican II Mass is a companion to the normative pre-Vatican II Mass although today called extraordinary, but allowed freely nonetheless.  Praytell projects onto those they deride the same disease they have. Former PI is a prime example of this in a single person.

Two comments on the Praytell blog which you can see by pressing praytell here (I copy them before Praytell either axes them or dismisses them as Praytell is quite a dismissive blog) speak the the dilemma of not only Praytell but of the Church:

“It is one of the tragedies of Pope Benedict’s papacy that he was so badly misrepresented by liturgical folks far to the right of him who claimed to speak and act at his inspiration. What was it about him, or his liturgical style, that so fired up this lot of people??”

1) He was able to discuss the “Tridentine Missal” without dismissing it as un-reformed and therefore irrelevant.
2) He was never dismissive of the people the who preferred the “Tridentine” liturgy.
3) He was one of the few members of the Roman hierarchy willing to step back and at least ask some questions about the direction things went in post-Vatican II – putting it to the sunshine test as they say.

And another comment speaking about the lack of bishops willingness to address the central crisis of the Ordinary Form of the Liturgy in today's Church, meaning its abuse:


Right vs. Left is an illusion when talking about Catholic orthodoxy. I wish people would stop using those loaded political terms.

If a blog wants to to push Catholic un-orthodoxy, then we get into a Right vs. Wrong scenario, and there are loads of blogs with that agenda out there already.

As someone who has never attended an Extraordinary Form mass, but who has suffered silently through some sickening abuses of the Ordinary Form, I am glad to have blogs where I can express my opinions on decorum, justice and rightness. This is not “conservative rightness”… this is Catholic rightness.

The Devil fervently desires for good, otherwise like minded Catholics to disagree violently over rubrics and “liturgy”.

Yesterday I spoke with a parishioner who visits Florida frequently. She says she has been to five different parishes there trying to find one that has the Liturgy that is celebrated properly and in all five found abuse after abuse after abuse. Where did the abuse come from ? From the priest who was the celebrant of the Mass turning the Mass into a platform for his own narcissism. This is the ultimate form of clericalism.

Some say that the clericalism of the pre-Vatican II Mass, the normative extraordinary form Mass, is that the laity couldn't participate, the priest did it all. Of course this is hogwash and if true easily remedied by encouraging the laity to take the spoken and sung parts of the Mass as we do in the Ordinary Form. Pope Benedict would certainly endorse my suggestion and say let's move away from the 1950's hermeneutic of lay participation in the normative Mass of that period and toward what Vatican II encouraged.

But the priest in the normative pre-Vatican II Mass seldom made the Mass his own by manipulating it. Most priests were scrupulous almost pathologically so, in observing the rubrics of the Mass. This isn't clericalism although scrupulosity can be extreme. But I'd prefer a scrupulous priest to an unscrupulous priest!

But my point isn't that we should ditch the normative Mass of the Post Vatican II Church, what now is called the Ordinary Form but to make sure that we take care in celebrating it properly beginning with priests who don't! That is the local bishop's responsibility and often there is no action in this regard. That's another story!

Until Praytell gets its head out of its ideology and recognizes why there is a push back against the Ordinary Form of the Mass, meaning the horrible way it is celebrated in perhaps the majority of parishes in this country, the status quo will remain!
Posted by Fr. Allan J. McDonald at Monday, August 03, 2015

I can't understand why so many 'progressives' see the old Mass as such a threat. Since 2007 there has been a modest increase in the number of celebrations, but those who prefer (for whatever reasons) the Vetus Ordo usually have to go out of their way to attend it.

On PrayTell (from which I am barred) I have seen the following, both in the main articles and in the combox. My comments in brackets.

1. Summorum Pontificum was simply a failed attempt to reconcile the SSPX. (Anyone who has read the document, and Ratzinger's liturgical writings in the previous quarter-century knows this not to be the case.)

2. 99.9+ per cent of English-speaking Catholics are incapable of following a Mass in Latin. (That's fewer than one in a thousand. Given that they are familiar with the vernacular translation, and English is a very Latinized language, this is ridiculous hyperbole.)

3. The idea of having two forms of one rite is novel, and therefore a rupture with Tradition. (Since when were progressives opposed to novelty? The Novus Ordo abounds in novelties. In any case, allowing the 1962 rites to coexist with the post-Conciliar ones, whatever you choose to call them, is a reconnection with Tradition.)

4. The so-called Tridentine Rite was suppressed when Paul VI imposed the new Missal. (The Church has never suppressed any valid and orthodox rite, and it can hardly be argued that the Roman Rite suddenly became unorthodox in the wake of Vatican 2. Bugnini sought leave from the Secretary of State to petition for a juridical abrogation and was turned down flat, as such an act would be 'obnoxious to liturgical Tradition'. Ironically the Novus Ordo possibly could be juridically abrogated, so for those who object to two forms there's a logical solution!)

5. English is now the world language, the 'new Latin'. (Try telling that to the French. The importance of English goes a long way to explain why the CDW threw out the 1998 Sacramentary and insisted on accurate translations. Yet many of the PrayTellers are bitterly opposed to these. In 2011 one (female) commentator wailed 'They've taken away my Mass!' Note the personal possessive pronoun.)

6. The 1962 Mass is 'not needed'. (It's not necessary for salvation, but the same argument can be used about the 1970 Mass. The idea that it has been replaced by a new and vastly superior product seems to me a conceit born of ignorance and bordering on heresy. One also reads that it does not reflect a fundamental change in ecclesiology/theology which took place in the second half of the 20th century, but is found in no official documents. If the Church has changed its understanding of the Eucharist, I think we might have been told.)

7. People who attend the traditional liturgy and have their children baptized and confirmed using the older forms are narrow-minded bigots who don't really understand liturgy and make women put Kleenex on their heads. (Bishops are quite happy to carry out traditional confirmations and an increasing number are willing to celebrate Mass in the older rite. In my experience young people from all over the world who are drawn to the Vetus Ordo are seriously looking to deepen their faith, like the many who make the annual walking pilgrimage from Paris to Chartres. In contrast, many of the 'progressives' seem hide-bound, parochial, loath to abandon the preconceived notions of their youth along with their guitars - and let's face it, increasingly superannuated.

Liberals are afraid of the TLM because they are absolutist, cannot abide variance from the V-2 talking points ever.

Historically, it can be demonstrated that its logical development ends as dictatorship. In the mean time, as long as one person dissents from their ridiculous ideology he must be sued out of existence. In pursuit of the liberal agenda, political correctness was invented. You disagree ipso facto you are a bigot.

The socialist/communist terminology for what liberals now call bigot was CLASS AILIEN. A class alien, say in East Germany had trouble getting education, was barred from all but the most menial jobs, and the children of such people were treated similarly until they would disown their parents. This is coming here as well in the name of political correctness.

In the former soviet systems advancement in society, in jobs, primarily depended on party loyalty. In our country, managers are evaluated on how well that adhere to the politically correct agenda. Federal government workers are seriously oppressed in this way but the private sector has been infected and the disease is spreading.