COFFEE AND DONUTS IN THE PLACE OF HOLY COMMUNION--AN ECUMENICAL APPROACH? 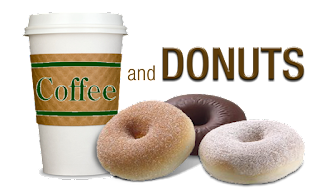 Far away and in another galaxy, light years away, word has been received that in this parallel universe, a groom who converted to Catholicism thus making his dad quite mad, has decided to marry a Catholic bride and have a Nuptial Mass. The non-Catholics of course will not be allowed to receive Holy Communion.

So the mad dad of the groom in this parallel universe who doesn't like Catholic exclusion has decided to provide coffee and donuts in the vestibule of the church so that the non Catholics can have something as the Catholics receive Holy Communion.

Question: Is this better than having them come forward to receive a blessing in place of "having something" and do you think this a wise pastoral practice?  Just wondering.
Posted by Fr. Allan J. McDonald at Sunday, August 09, 2015

The priest is an idiot for allowing it.

Word received light years away is that the priest or pastor may not know about it and may think it is for everyone after the Nuptial. This parish has a huge narthex and often has coffee and donuts after Mass.

A priest knows everything that is going on. It's like a teacher in the classroom. They see everything.

And if the priest had a pair he would say to the Protestant father of the groom the wedding Mass is not taking place until the snacks are removed. They have 10 minutes to remove them otherwise Father is off to the mall for the afternoon. Find another priest. Have a nice day.

Catholic-convert groom needs to have an aside with non-Catholic dad about Spiritual Communion and why his idea is offensive to Catholics present as well as non-Catholics who understand Ecumenism. Unfortunately, wounded And fractured Christianity means that Communion for all is not possible. It is not about "getting something" or not.

Yes, but the priest doesn't know that the coffee and donuts aren't for after Mass, but are for those poor non-Catholics who don't get anything while Catholics are going to Communion. The poor priest thinks the Coffee and Donuts are for him and all the guest after the recessional. But through a slight of hand, the non-Catholics know that this is for them at communion time so they won't be left out.

Well, how common is it to have coffee and donuts after a Catholic WEDDING?


It would be good to know somethng more about the father of the groom. If he is employed somewhere the pastor could engage him in a conversation .

For instance:
"I understand that where you are employed at, your monthly medical insurance payment is only X. As a diocesan priest, I am paying much more. Is I possible I can get insurance at the dame rate you are paying?"

or
" I undertand you belong to a veterans organization and your monthly medical and autombile insurance payments are much less than mine. Can I get the same insurance arrangement as you have? "

You would then tell him that because he is not a member of the Catholic church and believes what it teaches, he for a simlar reason cannot receive the Holy Eucharist.

If non-Catholics want what we have to offer, then let them show some integrity and become Catholic. Otherwise, they should keep quiet and let us do our thing.

It's just childish and as long as he does not attempt to disrupt Mass it can be tolerated as such. The priest should not allow himself be drawn into a tiff and should help the groom find a way to work through it. If the father is, indeed, committed to his desire for Communion it should be respected and discussion along that line encouraged. It is at least an opportunity for enrichment and possibly for conversion.

I am confused. You asked whether providing coffee and donuts is better than coming forward for a blessing and whether it is “a wise pastoral practice.” These questions seem to assume the priest knows about the purpose of the coffee and donuts at a time at which these questions become relevant and make sense. How could the issue of it being a wise pastoral practice arise if the priest does not know about it? Or is the relevant practice the practice of simply allowing coffee and donuts to be available in the vestibule during Mass and running the risk that they will be misused?

A Church wedding is a very special and solemn occasion. What bride (and probably the groom) is going to have coffee and doughnuts anywhere near the ceremony? In most cases I venture to say, not even at the reception.

Please turn off the cell-phones as well.

Who knows? Maybe by staying put and observing dad will "get it".

They can always borrow the eastern tradition of mirivanya...blessed bread...not consecrated...I see it as a win win. Everyone can take the mirivanya...Catholic and non Catholic alike.