THE CARDINAL WHO WOULD BE POPE ONE DAY?

Rorate Caeili has this translation of a recent homily by Cardinal Robert Sarah, Prefect for the Congregation for Divine Worship. He is so clear! 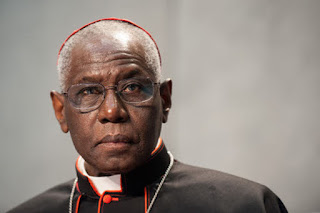 Cardinal Robert Sarah, Prefect of the Congregation for Divine Worship and the Discipline of the Sacraments, visited the Abbey of Our Lady of Fontgombault for the Feast of Saint Mary Magdalen, one of the traditional co-patrons of France.

Just as Rorate was proud to provide the first translation of the article published by the Cardinal-Prefect for L'Osservatore Romano (a translation of exceedingly high quality, made by our professional translator and linguist, Francesca Romana), we are proud to provide (once again, in a first in English) the sermon pronounced by the Cardinal at that occasion, as he visited the Abbey that kept so much of our Latin liturgical tradition alive.


Sermon of His Eminence Cardinal Robert Sarah
Prefect of the Congregation for Divine Worship and the Discipline of the Sacraments
(Fontgombault, July 22, 2015)


Dear Brothers and Sisters,
Mary Magdalene was a woman of great faith, with an utter and absolute trust in God’s infinite and merciful love. She had personally experienced Jesus’ redeeming love, and she had dedicated herself unreservedly to His service. We see her fully associated to the sorrowful moment of the crucifixion and death of Jesus on the Golgotha, beside John and the Blessed Virgin Mary: There were standing by the cross of Jesus His mother, and His mother’s sister, Mary the wife of Clopas, and Mary Magdalene. (John 19:25)

Since the day on which “Mary, who was called Magdalene” was delivered from seven devils (Lk 8:2) that had made her a slave of sin, but especially since the day on which she was a witness, when standing by the cross, of the horrendous death of Jesus, because of our sins and out of love for us, her heart has become a blazing furnace of love for the Lord. Since the day on which she saw Jesus die on the Cross, Mary Magdalene has understood what true love was. She has understood that the power of love is death: going to the ultimate ends of love means dying for those whom we love. Since Jesus went as far as to die for us, Mary Magdalene herself is going to answer Jesus’ love: she will on turn love Him to the point of giving herself totally to Him.

Therefore, after the rapid burial of Jesus on Good Friday, as soon as daybreak after the Sabbath, she goes to the tomb with sweet spices to embalm the body of Jesus. Her heart is ever more ablaze with love for the Lord. Nothing can stop her: neither perils in the night, nor the brutality of the soldiers who keep the tomb can frighten her. Love is stronger than fear. She comes to the tomb, and finds out that Jesus’ body has been carried away. She stays outside the tomb weeping (John 20:11). She was standing outside, as if she felt excluded from faith in the Resurrection, and she was waiting for the Lord’s goodness and mercy to introduce her back into the mystery of faith. She was standing outside, excluded from divine realities.

Let us understand this point: we are never more outside, than when we are excluded from faith. We are never more outside, than when we forsake Jesus and decide to live as if God did not exist. Many of our contemporaries are outside, far away from God, far away from the faith in our risen Lord Jesus. It is this very experience that we find in Mary Magdalene. She was outside the sepulcher, where had been laid the inanimate body of Christ, and where had taken place the unheard of event of Resurrection. She was fully assured of Jesus’ death, and she was doubting Resurrection. That is why she had come with sweet spices to fulfill the embalming of Jesus’ body. Mary Magdalene was fully assured of death, and she was doubting Life. She was fostering in her heart a tender and unshakable love for Jesus, but her faith had become wavering. In her innermost feelings, she was doubting Resurrection. Yet, at the same time her heart was ablaze with love for the Lord.

In this woman’s heart as in ours, there is something akin to a tremendous fight between love and faith. But if in our hearts we have love for the Lord, everything else will be given us in fullness. Mary Magdalene is a striking example of that. That is why what counts before God is not the importance of the works we carry out, it is the intensity of the love that prompts us to do them. Yet, this love needs to be enlightened, awakened, and made to reach the heights of God. Mary Magdalene, as she hoped to find Jesus, had before her very eyes the Lord Himself; yet, she could not recognize Him. Her eyes were blinded by human ponderousness. She was assuredly firm and unshakable in her human feelings. Still, she had not yet reached the height of faith, the height of God.

When she saw Jesus, she thought that He was the gardener. When Jesus tells her, “Mary”, her eyes open and she wants to cling to Him. The voice that utters her name has undoubtedly reached unto her innermost heart. As she recognizes Jesus’ voice, Jesus gives faith back to her. She turned towards him and cried out “Rabboni!” (which means Master). (John 20:16) She then falls on her knees so as to kiss His feet with her lips, and to cling to them. You see now what worship can become. This warm voice, full of tenderness and love, becomes for Mary Magdalene a Majesty before which one can but fall on one’s knees, so as to contemplate and worship. As she kneels and weeps, Mary Magdalene teaches us that to love the Lord means to kneel before Him, to listen to His Word that sends us on mission, to worship Him intensely, and to contemplate the light that radiates from His face, so that in turn our faces may radiate with the joy of risen children.

To worship is to gaze at God, and to allow God to gaze at us, so that He may imprint in us the radiance of His glory.

Yet, it so often happens to us to be like Mary Magdalene. Jesus is before our very eyes, He speaks to us through the Liturgy, but we do not recognize Him. Allow me to repeat it, we need His Word. If it is not Jesus Who calls us by our names and offers us His grace, we shall never be able to recognize Him.

Let us pray that today, we may hear His voice and His Word, that we may recognize Him in the Blessed Eucharist; and after having worshipped and eaten Him, may He send us on mission and say to each of us: Go to my brethren and tell them the Good News: Jesus is alive, He is in our midst.
Amen.

God bless Cardinal Sarah. The contrast between his beautiful, deeply Catholic statements, and the empty, social activist cliches of Francis is downright painful.

Fontgombault, with close to 100 monks and which has founded four other abbeys has opted to use the pre-Conciliar rite. Did Cardinal Sarah come with a message from Pope Francis to get with the program and update their liturgy? No he did not.

This is highly revealing and shows the extent to which the liturgical climate has altered since the 1960s and 1970s when Benedictines in France burned their chant books, embraced modernism and saw their communities disappear through lack of vocations.

Here in England Bishop Egan of Portsmouth has entrusted one of his parishes to the Franciscan Friars of the Immaculate who are offering Mass in both the newer and older forms.

TY, do you want to be my editor--I have another full time job! :)

Father, Thank you so much for this blog. I read you all the time and link you to my blog.

May God bless your ministry as a priest, and please pray for my son who is a seminarian.