AS MUCH AS THE CHURCH WANTS TO BE RESPECTED AND SHAPE CULTURE, WE CAN ONLY LEAD OUR HORSES TO THE WATER BUT WE CAN'T FORCE THEM TO DRINK 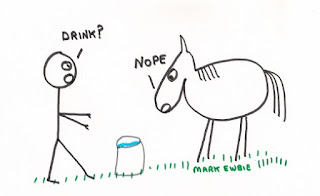 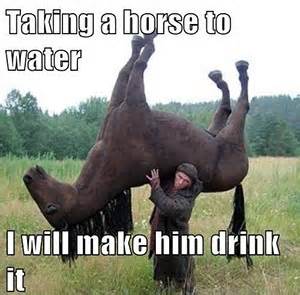 One of the things that alienates Catholics and others from the Catholic Church is the Church's desire to make people live as Christ wants them to live. We try to shape civil law to reflect God's law. We have a right in a democratic country to do so, but this drives some people wild. It makes them like the horse immediately above in the upside down position.

I know from some of my Italian relatives that they despised the Vatican's influence in Italian politics. They didn't like the fact that for many years divorce was illegal. So you had cheating spouses abandoning each other and children to live with their significant other in an adulterous state.

American Catholics, on the other hand, are use to living in a plural culture with a melting pot of religions and no religion. We know that divorce is a legal right and the ability to marry again after a divorce is a legal right. Most Catholics have no problem in calling second, third, fourth, fifth and so on marriages, marriages. We don't refer to these as civil unions, which according to pure Catholic teaching, they are civil unions not marriages.

Our country still has laws against bigamy. But these might well be challenged in court and polygamy may become the law of the land. When we refer to those countries where polygamy is a part of the culture, we say, so and so from Saudi has eight wives. We don't single out the one true wife and call the others adulteresses.

Now we have same sex marriage the law of the land. This law, forced from the top, by a very well financed and motivated minority usually to be found in the entertainment industry, has implications that will shape younger generations for generations to come. This minority is not poor though; they are mainstream, have big pocket books and know how to get what they want. We've seen this in a stunning way in the past 25 years.

I can remember being somewhat offended when condoms ad were allowed on the networks. Then Viagra ads and now scantily clad women laying on a bed speaking about the glories of Viagra that their many male lovers use. Will we see men, married or not to each other, in similar type ads?

What about the TV commercial where an unhappy looking woman is complaining that vaginal intercourse is painful. I wonder what a man will say about his intercourse with another man in a similar type ad?????

You see where we are going as a culture formed not by faith but by corporations hell bent on making money and even exploiting immorality to do so.

But the Church can't control this. But can we form Catholics to be critical of what the culture is doing to them and others?

I worry that we have lost. But this exhibits a lack of faith, doesn't it? Christ has already won the battle. But not everyone will be saved, some will be lost and are lost. We can't force a horse to be saved if that horse doesn't want to be saved! We have to live with this until the Lord returns.

Nonetheless, we have bigger fish to fry. Pope Francis is pointing the way as he engages culture on the issues that we have in common, like the environment, war, peace, economics and the like. Can we cook the secularists in our own crock pot of morality by slowly but surely pulling them in? Is this the new evangelization done incrementally?  Pope Francis is savvy.
Posted by Fr. Allan J. McDonald at Sunday, August 02, 2015

Yes, we must work to convert the unconverted, instead of only preaching to the choir. The Traditionalists want to hear nothing from a pope and bishops but direct quotations from the Summa Theologica, even when these pastors are speaking to non-belivers. However, if we wish to fulfill the Lord's command to convert the whole world to Him, then we must find the most effective methods of doing so, even if such methods are gradual.

Christianity isn't about succeeding, it is about trying. We had the comfortable illusion for a couple of centuries that our country was trying along with us. Now we know better. Will we give up now?

Suppose we wanted to convert a town like Macon. Suppose the Lord appeared to us and gave us 40 years to accomplish this task. How would we proceed?

I suppose we'd need to start small and focus on just the Catholics in Macon and the suburbs...we'd need a massive and concerted push for adult re-conversion, adult faith formation. Of course we'd also need spiritual directors, more vocations to the priesthood, deaconate and religious life. More bible studies, more of everything.

We'd also need to get a handle on the who's who of Macon society: who are adamant enemies of the Gospel? What do we know about them? How might we approach them? Who's less adamant...who's neutral...who's generally favorable...who's almost there?

We'd probably want a layered, multi-faceted approach but for this to work we'd need to focus on a core group of this cross section of society to help them become utterly convicted of the Faith and utterly in love with the romantic adventure that is Catholicism, that is discipleship of Jesus Christ. It would be eucharistic, marian, and steeped in the tradition and tried and true spiritualities of our Faith from Carmel to the Franciscans, from the Salesians to the Jesuitical insights....

And maybe focusing on this core group would take us 10-15 years during which time we just more or less lay the ground work and raise up the NEXT generation without the baggage and sense of being second class citizens and second rate cultural proponants that many of us struggle under. If the goal is mass conversion, it would necessarily be a multi-generational endeavor and involve the young and old, the rich and poor, the majority and minorities.

We'd need clear ecclesial leadership but alot, a predominant amount of lay initiative since culture and civilization is by and large created by the day to day friendships and trusting relationships of us laity. The stuff of society is made person to person. We are the primary evangelists (or the primary "scandalists").

Years 20-30 would be exponential growth via attraction by hundreds if not thousands of utterly convicted and convincing Catholic laity affecting their neighbors, friends, families, etc. by the daily witness of a Christian lifestyle. We wouldn't be arguing about how best to help gay people, we'd be living it via friendship. We would be arguing about abortion - we'd be helping individual girls and young women to choose life... like an all pervasive fog or rising tide, these hundreds or thousands of personal initiatives would just be going on all the time rather than having a few obvious "operations" or events to point at.

So if you want this to happen, if this is what you want, then I humbly suggest the beginning start with a core group of disciples who seriously put their minds and hearts together towards this end.... let us plan to convert Macon not because we're awesome but because Jesus is awesome. Not because we and our community is so fantastic, but because Jesus and the encounter with Jesus is fantastic.

Don't meet just because. Meet with this goal in mind, intentionally, specifically, giving color and direction to all you do: how can we bring all people to come to know, love, and serve Jesus Christ as Catholics by the year 2055? Anything that helps this goal is "progress" anything that hinders it is 'regress'. The goal thus becomes the objective yardstick by which we can judge the advisability of any given act, plan, etc.