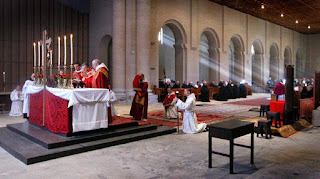 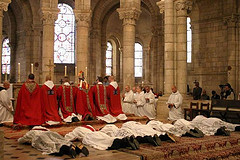 On my post below this one about Cardinal Sarah, a Pope Francis appointee to be the Prefect of the Congregation for Divine Worship, John Nolan writes the following insightful comment which I had not considered:

"Fontgombault, with close to 100 monks and which has founded four other abbeys has opted to use the pre-Conciliar rite. Did Cardinal Sarah come with a message from Pope Francis to get with the program and update their liturgy? No he did not.

This is highly revealing and shows the extent to which the liturgical climate has altered since the 1960s and 1970s when Benedictines in France burned their chant books, embraced modernism and saw their communities disappear through lack of vocations.

Here in England Bishop Egan of Portsmouth has entrusted one of his parishes to the Franciscan Friars of the Immaculate who are offering Mass in both the newer and older forms."

As you know I was formed (some might say deformed) by my quite progressive and very liberal seminary. When I entered First Theology in the fall of 1976, there were 60 eager candidates many of whom, not all certainly, were formed in solid Catholic households and parishes despite the silliness in the Church of that period.

I would say that the majority of that 60 seminarians knew their Baltimore Catechism frontwards and back and not only attended Mass daily as lay people, but also had a powerful devotion to our Blessed Mother, frequently prayed before the Most Blessed Sacrament and appreciated the deep devotional life of the Church prior to the Council. They also appreciated distinct garb for nuns and priests and despised the frumpy secular clothes (although some wore rich fashions) that many nuns and priests had selected over habits/clerical clothing to look like lay people, although the nuns never seem to be able to do so for some reason, you could still pick them out even in frumpy lay clothing! They also liked calling priests "Father" although our seminary priests to include the rector wanted us to call them by their first name! I felt so grown-up!

At the time I was 22 years old. Thus only 11 years had elapsed since the close of the Council, but to me at the time it seemed like a lifetime!  But the point was that most of us and I was amongst the younger, were formed in a hybrid Church, pre and post Vatican II. Most of us loved the best of pre-Vatican II and appreciated what the real Vatican II wanted to accomplish if only it would be implemented except for the progressives who hijacked the Council with their spirit, not the Holy Spirit and distorted it.

However, the silly progressive priests in the seminary who ridiculed the entire corpus of the pre-Vatican II Church to our first year class had already begun what would lead to the  destruction  of once proud and glorious religious orders and lay the foundation for the same thing to happen to a significant number of lay Catholics who would eventually become "nones." These same progressive priest/theologians also ridiculed the conservative inclinations of more than half of my first year class leading to about half of them not coming back for second theology, some of whom went to other seminaries and eventually were ordained.

By the time we were ordained transitional deacons in 1979, my class of 60 had dropped to 24. Today of that number some have died but many have left or have been asked to leave the active priesthood. So the active priests today are about 8!!!!!!! (Aging Progressive priests of that era would see my class as a success so in denial are they about the ruin they caused!)

What did the progressive seminary staff despise about the majority of my entering class? These wicked first year seminarians challenged the seminary personnel to have public recitation of the Holy Rosary or at least a public time for all to quietly pray it together, to have Adoration and Benediction of the Most Blessed Sacrament regularly; to promote Holy Hours before the Blessed Sacrament and to tighten up on the public dress of seminarians on the first floor of the building. (There was no dress code!) However, but 1978 after some seminarians started wearing short-shorts and flip flops to class and one even a tank top with it, the seminary cracked down, kind of and said, don't wear that).

The other thing some of our seminarians demanded was more Latin in the new Mass and more tradition (not a return to the Tridentine Mass but just more attention to detail and tradition for the new Mass). For anyone to push the Tridentine Mass at the time would have been a sacrilege and gotten them thrown out of the seminary under the cover of night.

Baby, we've come a long way since the close of the Second Vatican Council in 1965. A Pope Francis appointee goes to a French monastery that primarily celebrates the Extraordinary Form of the Mass and supports the great recovery this Benedictine Order of priests has experienced since doing so and even spreading their success to other places.

It has to make the iconoclasts of the 1960's (if any are still alive or have their faculties) burn with anger to see their agenda completely dismantled and by a younger generation. These still live progressives (some 84 and older like good ole Fr. Hans Kung) don't like to have their ideologies questioned although they encourage others to question truth and Truth! Just don't question them or they will bring down their almighty wrath on you!
Posted by Fr. Allan J. McDonald at Sunday, August 16, 2015

Thanks for sharing these reflections, Father McDonald. One thing that's especially impressive about you is that you value what is good on both sides of the present liturgy divide.

My experience with this situation began about ten years after you were ordained. Seminarians who expressed certain affinities for papal teaching, for Marian devotion, for liturgical Latin, etc., would first be sent to a psychologist, and if that didn't work, would then be dismissed. When people today observe that seminarians are more conservative than in the recent past, I counter that seminarians today are simply less likely to be "reprogrammed" or dismissed for being conservative.

These developments with Cardinal Sarah are promising, "but when the Son of Man comes, will he find faith on earth"?

So with regard to the letter the good Cardinal wrote, which included urgings for ad orientem during most of the Mass and the inclusion of the old offertory...do we think anything will come of this? I hope and pray something does, but I'm not optimistic. The previous Prefect said everyone should receive Holy Communion on the tongue while kneeling, and nothing came of that.

Kneeling for Holy Communion, though, has dramatically increased since the advent of Summorum Pontificum and not just for the EF Mass but also for the OF Mass. It isn't the majority of parishes affected but a lot more than prior to it!

The same with ad orientem and I don't mean just the EF Mass, but it accounts for the majority of it but now with parishes who do so for the Ordinary Form or at least one Mass as we do in my parish. And at that Mass everyone receives kneeling at the altar railing.

I do think there is hope for what Cardinal Sarah stated about adding back some EF elements to the OF Mass as has already occurred and with the imprimatur of Pope Francis for the Anglican Ordinariate.

I think we all know that Pope Francis is largely ambivalent about liturgical questions, so it seems unlikely that Sarah will accomplish anything as prefect. The real hope here is that Sarah could become pope one day.

Cardinal Sarah is certainly excellent but my choice for the next papacy is Cardinal Burke ...

One really has to wonder if the goal of many of these seminary officials was to destroy the priesthood - to do so in service of a goal of radically remaking the Church into something entirely different.

If so, they've accomplished quite a lot toward that goal.

With more than a few of the Jadot bishops, it was an open secret that they seem delighted by the opportunity created by rapidly dropping numbers of active priests to turn parishes over to women lay administrators. Fair to ask whether that was making lemonade out of lemons, or if it was the real objective all along. More than a few such bishops were known to favor ordaining women.

Referring to the change in liturgical climate, I would very earnestly ask you, Fr. McDonald, to pray for my parish and new pastor. We made some headway over the past year with a traditionally-minded younger priest, but he's been transferred elsewhere now, and our new pastor is clearly of the 1970's ilk when it comes to liturgy. We're a cluster of four churches (mine is the oldest and arguably most traditional of the lot), and at mine, they have (or rather, had) the altar servers in cassocks and surplices (rather than albs) and they use bells through the Eucharistic Prayer. Well as soon as the new pastor came in he put a stop to the cassocks and surplices since "they're an older thing and no one really uses them anymore," and since he wants there to be uniformity across the four churches (the other three of which use albs). He also, so I've been informed, may be putting a stop to the bell usage.

Please pray that he can experience a liturgical conversion of the kind you had! I've been praying for a couple years now for my parish to become more traditional, and it seemed for a while like things were headed that direction, and it would be hugely troubling if this new pastor tears everything down. He's not very ceremonial, either, probably because he doesn't see the value in it. So please do add him to your prayers.