BOMBSHELL: POPE FRANCIS FINALLY DONS MOZZETTA, ALBEIT A BIT ON THE IMPOVERISHED SIDE, BUT WHAT THE HECK! 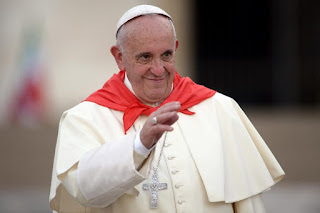 There is a not-quite-so-subtle distinction between a mozzetta and a bandana. He looks a bit like Clint Eastwood in 'Rawhide'. Anyway, I'm past caring what Francis says or does. In the larger scheme of things it's irrelevant. When his election was announced my first thought was 'would the last person to leave the Church turn the lights out?' I now know that this was an over-reaction. He will probably be the one and only pope to have been formed by the 1960s and his capacity for causing damage is limited, if only because the damage has already been done thanks to his 'blessed' predecessor Paul VI.

It didn't matter to SS Thomas More and John Fisher that Clement VI was inept, and nor should the failings of popes matter to us either.

The pope putting on a piece of cloth. Why is that a bombshell?

As if it matters whether or not the pope wears a mozzetta, silk, damask, rabbit-trimmed, or otherwise.

I'm past caring what John Nolan says or does. In the larger scheme of things it's irrelevant.

Wearing the mozzetta is a sign of authority, which Pope Francis has chosen not to wear and hence some have conjectured that the authority still lies with Benedict and that Francis has taken on only the role of Bishop of Rome. That aside, when the Pope wears red it signifies that he is willing to give his life for the Church. Perhaps that is what Pope Francis is now signalling - and better late than never - many think that he is the bishop dressed in white referred to in the Fatima messages who is martyred for the Church.

It was I who originally referred to one particular Anonymous as a 'gobshite' and now it appears that he is congratulating himself. (By the way, it's 'hear, hear').
Or do trolls, in common with most amoebas, reproduce by binary fission?

GOB - noun: lump of a viscous or slimy substance: a gob of phlegm

The mozzetta is a SIGN of authority. With or without the SIGN, Pope Francis remains Bishop of Rome and Pope.

The "conjecture" that B16 retains papal authority is bizarre, to the point of absurdity.

It was bizarre when the bishop of Rome was living in Avignon. And it was bizarre when there were three "popes" running around. Also bizarre that a council had to be called to decide who was the actual pope. A little awkward that the Church now says that the pope is above councils, raising a question about how a council could determine who the true pope was.

I find it bizarre that the only pope to resign in modern history did so without compulsion, and his successor seems to be the most dogmatically problematic pope in the history of the Church.

Lots of bizarre things have happened in Church history, especially when it comes to the popes. That's why it is important for us not to be pope-watchers -- we are Christ-followers.