THE TWO MOST DEPRESSING ASPECTS OF THE LITURGY TODAY: PRIESTS/LAITY WHO TINKER WITH THE ORDER OF THE ORDINARY FORM OF THE MASS AND THE STATE OF LITURGICAL MUSIC IN MOST PARISHES

Let’s be honest: Most parishes are woefully under-served by their music; every Sunday, someone pounds on a piano (or in 1960's fashion strums a guitar) while the congregation launches into yet another tortured rendition of “Gather Us In” or “Here I Am, Lord,” while our ears bleed and our synapses snap and our eyes drift longingly toward the exits.--Deacon Greg Kandra, the Deacon's Bench 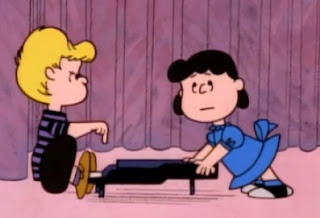 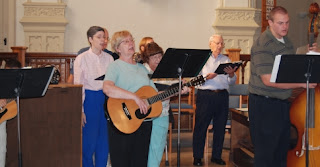 The only "liturgical abuse" that I think people might have experienced prior to Vatican II would have been priests who raced through the Mass, slurred the Latin words and got it over with. I don't think they would have manipulated the Mass beyond doing something like this. Things might have been too mechanical in some places focusing only on externals not the internal meaning of liturgical actions. For example many altar boys knew how to read Latin because it was phonetically spelled for them in English. They didn't know what the words meant though, but certainly many did.

There is not need to go int a litany of the types of abuse, some quite extreme, as it concerns the Mass in the Ordinary Form. Priests change words and they sometimes change the order of things and planners of Mass get quite creative and impose on the Mass things that do not belong there,although it might be nice to have it,but it isn't prescribed.

For example on another blog there is a post about the revisions that have been approved by the Congregation for Divine Worship for the Nuptial Liturgies of the Church. Cardinal Sarah has approved much of what was requested by the American Bishops except for the chanting of the Litany of the Saints during a Nuptial Liturgy and the moving of the Nuptial Blessing to the end of the Mass or after the General Intercessions. In a Nuptial Mass, it is to take place immediately following the Our Father, prior to Holy Communion. (Outside of Mass, it would take place after the Intercessions.)

This is what one priest wrote about Nuptial Liturgies and he unwittingly exposes what the biggest problem is with the Ordinary Form of the Mass which indicates a widely need reform of the clergy and laity in the area of celebrating the liturgies of the Church:

1. I know couples who did the Litany of the Saints on their own. This won’t change anything.

2. Most priests I know who move the Nuptial Blessing do it post-communion. I suspect it’s more common than people would like to admit.

Then there is a wonder article from First Things on the abysmal state of music in most parishes in the USA. It should be must reading for all seminarians and a course on it given to all priests and deacons! I copy this from the Deacon's Bench:

Discussions of liturgical music in many Catholic parishes have become needlessly polemical. The one thing we all agree upon is the poor state of liturgical music in most Catholic parishes. Like silly children taking up their parents’ quarrels, however, it’s not uncommon to see thirty-year-old adults arguing polemically about the “Spirit” of Vatican II and “hidebound” Latin traditions. While this irony may escape some, 2015 marks forty-five years since the Vernacular “Novus Ordo” Mass was introduced. The liturgical revolutionaries and counter-revolutionaries are dying out. Priests ordained before the Council are few, and folk groups are quite literally aging out.

The sad state of liturgical music in many Catholic parishes today is not the result of Vatican II. It results from poor planning and lack of proper training.

The proximate goal at Mass may be the Eucharist, but liturgy on the whole is a sacred curriculum, and most participants are amateurs. Pastors in most parishes are amateurs also, at least as concerns music. This should come as no surprise; it is a healthy basis for tradition and humility. It is certainly not a criticism. We raise our hearts and minds to God using great prayers, great thoughts, great music received from our forebears.

…Let’s bury those old arguments about the “spirit” of Vatican II and our “hidebound” Latin Tradition. These quarrels belong to our parents’ generation, not to our future. Good music takes time, planning, and skill. Let’s avoid polemics and teach a new generation how to sing their prayers, using authentic Catholic music from our own tradition as our first source. The third Roman Missal and the Roman Gradual (or Gregorian Missal) ought to be the starting point. Of course chant and sacred polyphony are our richest resource, but we are not museum keepers. Maybe if we become more practical about music in our parishes, we can build something of value. Nonetheless, at forty-five years since the first Novus Ordo Mass, authentic liturgical planning, professional skill, and leadership are the only reasonable basis for discussion of the unsatisfactory state of music in our parishes.

Read it all and it is well worth reading HERE.

(This is Deacon Kendra's commentary:) Music-lovers, especially, should take time to read it.
Let’s be honest: Most parishes are woefully under-served by their music; every Sunday, someone pounds on a piano while the congregation launches into yet another tortured rendition of “Gather Us In” or “Here I Am, Lord,” while our ears bleed and our synapses snap and our eyes drift longingly toward the exits.
I’m not sure what the solution is. It’s not easy, I know. As the article indicates, good music takes more than talent; it takes time and planning. It needs someone to make it a priority. (Not insignificantly, it often takes an investment of money—to have good equipment, decent sound, and a music director who can do more than plunk or strum.)  My Queens parish is blessed in this regard. Others, I know, aren’t so lucky.

Still, it doesn’t always take much to make a big difference. I remember fondly attending Mass one Sunday some years back in a California parish where the music was provided by a small family—parents and a couple young kids—using guitars and just their own voices. It was lovely, low key, prayerful—and practically perfect.

I only wish more parishes could create that kind of joyful noise instead of just, well, you know…noise.
Posted by Fr. Allan J. McDonald at Wednesday, August 19, 2015

To me, the biggest problem with the vernacular Mass, and one of the reasons I rarely attend it, is the abysmal quality of the music. My other objection was removed in 2011 when at last we had a translation rather than a jejune paraphrase.

By the way, your juxtaposition of images is unfair to Schroeder, who if memory serves, played Beethoven.