Why do so many Catholics wince at the Mass celebrated in this fashion? Have they completely lost their Catholic Liturgical identity in favor of a Protestant or secular view of the liturgy and are completely submerged in that ideology? 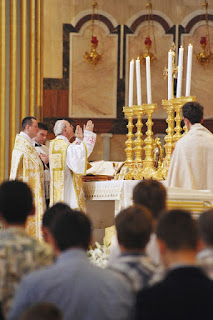 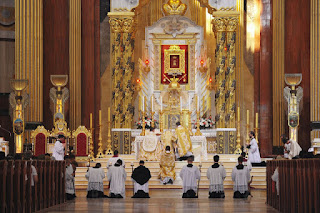 If there ever was a bishop from the periphery who should be taken seriously in the heart of the Catholic Church, her center, Rome and the Vatican, it is  Bishop Athanasius Schneider from Kazakhstan. His Excellency was the keynote for an Ars Celebrandi Traditional liturgy workshop in Poland.
Rorate Caeli has an article on a recent liturgical conference in Poland. You can read their complete story HERE.

But this is an important excerpt:


The Eucharistic liturgy is the most sublime realization of the first commandment of which Jesus reminded us: “You shall adore the Lord your God and worship Him alone” (Mat 4:10). Bishop Athanasius referred to the liturgical norms of the Church and the importance which should be attached to them in accordance with the whole Scripture and Catholic doctrine.

To establish an opposition between exterior norms and the attention of the heart would be against the Divine truth. Such a contrast was often established by heretical movements neglecting or refusing exterior norms, e.g. Christian Gnostics; Cathars and Albigensians; Calvinists; and some Catholic Pentecostals and Catholic Progressivists of various degrees in our days, he emphasized. He also pointed to some alarming data about an increasing number of profanations related to giving Holy Communion on the hand. Then Bishop Schneider went on to present a sublime model to be imitated in liturgical celebrations. This model is the liturgy of the Heavenly Jerusalem, described in the Book of the Apocalypse (Book of Revelation). It is characterized by seven elements, such as kneeling, deep inclinations, prostrations; incense; sacred songs, not performing wordly or sensual music (“a new song”); being free from concentration on oneself; praying and singing together with the Angels; a prolonged time for silence; putting Eucharistic Christ in the visible centre of the liturgical assembly (and not the seat of the human celebrant).

My comments: Happily in my diocese many churches which had placed the tabernacle off to the side or completely separate from the sanctuary have replaced the tabernacle back in the center. In Macon, two of our three churches, St. Peter Claver Church and St. Joseph Church (mine) placed the tabernacle back in the center after more than 40 years of being at the side. At St. Peter Claver and mine the celebrant's chair was dead center. This is a positive sign that the outdated 1970's configuration for sanctuaries is giving way to Catholic tradition for parish churches. (Cathedrals have a separate tradition.)

Choir lofts, too, are making a comeback. Two newly built churches in our diocese have the traditional choir loft for the choir. No longer is the choir or music ensemble with  right next to the altar with their numerous microphones, chairs, musical equipment and bookcases for their stuff, completely in competition for the more important elements in the sanctuary, the altar, ambo and tabernacle.

Liturgical music, as stated in other posts, continues to be a hodgepodge of mediocrity.  When contemporary sounding music ensembles sing from the front, these become like "Saturday Night Live" intermezzo entertainment but not as good placing the choir at the center of liturgical attention, not the action of the Sacrificial Eucharistic Liturgy! The plucking, strumming and banging away on string and percussion instruments betrays the groups complete lack of understanding of the service chant is to render the celebration of the liturgy.  Snare drum sets find themselves in Plexiglas enclosements next to the altar which lacks completely in beauty and taste and has nothing to do with the Church's liturgy!

Finally, the casual way so many present themselves for Holy Communion not only internally (not being in a state of grace due to a lack of sacramental confession for mortal sins) and externally (grabbing the Host on the move and lack of concern for particles of the Most Holy Eucharist remaining on the hands) has caused in great part the crisis of faith not only in the central dogma of our Catholic Faith, the Real Presence of the Most Holy Triune God in the Most Holy Sacrament of the Altar, but in Catholic identity as well.

At the heart of 1970's liturgical iconoclasm is placing the congregation and its actors at the center, not our Risen Lord and His Sacrificial Action in the Most Holy Sacrifice of the Mass. Even the 1960's novel imposition of Mass with the priest facing the congregation turns the priest into a human actor entertaining the congregation with his style and way of praying and engaging them.  The symbol of this which betrays Catholic dogma concerning the priest at Mass is that it points not to Christ the High Priest offering Himself as the Sacrificial Victim to God His Almighty Father, but rather an illusion that the priest is simply performing something Jesus did at the Last Supper rather than on Good Friday.

Only a recovery of the Traditional Mass and its powerful doctrinal theology of celebrating the Mass can the Church hope to recover its true Liturgical Identity lost only in the late 1960's and 70's in favor of a Protestant and Secular formlessness of the liturgy.

Unfortunately, too many Catholics today cooked completely in the crock pot of this formlessness wince when they experience true Catholic spirituality and identity in the traditional Mass or even traditional elements in the Ordinary Form of the Mass.  Only time can help heal this devastating wound to our liturgical tradition.

This bishop is blessing from God. He would make a much needed new pope.

From all I have read of him and heard of him Bishop Athanasius Schneider is a tireless promoter of Catholic orthodoxy and so evidently a very holy man. He has written a book, "It is the Lord" in which he advocates against receiving communion in the hand, which he calls one of the five liturgical wounds of the Church.

He spoke last month in several states in Australia on the Church's traditional teaching on marriage. The Australian Confraternity of Catholic Clergy have a link to the talk he gave them. It is really well worth reading:

From the beginning it was not so (Mt 19:9)
The unchangeable truth about marriage and sexuality by Bishop Athanasius Schneider

I will pray for him. I wish Cardinals and Bishops would follow his example. The Holy Father should postpone the October Synod and instead have Bp. Schneider address the assembled prelates. They need to be reminded most earnestly to feed the sheep!

A lot of the churches up here in Atlanta have the tabernacle to the side, including Atlanta's oldest parish, Shrine of the Immaculate Conception (across from the State Capitol). My parish in Buckhead does too---with the presider on an elevated base behind the altar from which he leads the liturgy of the word. The Cathederal though (Christ the King) still has the old high back altar with the tabernacle and 3 candles on each side, and the altar rails are still in place, but it has been years---decades---since the back altar has been used for a Mass or the altar rail used for distribution of communion. In fact, maybe a decade ago, some pews were removed from the middle of the Cathedral so communion can be distributed there along with at the altar rail.