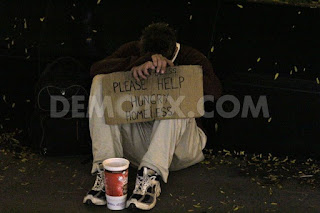 After I posted my last two posts, I left my room and went out the backdoor of the rectory to go and exercise. It was about 5:55 AM. As I walked onto the porch from the backdoor, I noticed something right next to my car, which is right next to the porch. At first I thought it to be a bundle of trash, but on closer inspection it was a person! It was a homeless man.

He was in the fetal position and I could not wake him by yelling at him or shaking him. So I called the police and about 20 minutes later an ambulance came. They could not wake him either. It looks like an overdose of alcohol and drugs or both.  They just took him away to the emergency room unconscious. I fear he won't make it. Who knows who he is and where he is from or if he has any family. I did not recognize him as a regular homeless man in Macon. There are way, way, way too many people like him in America!

I told the EMTs that if I lived in the suburbs and walked out my back door and found a man unconscious by my car and in the fetal position, I would have freaked out. But having lived in Macon's downtown parish for 11 years and in downtown parishes now for over 30 years, it didn't faze me in the least. I patiently waited 20 minutes outside with him until the ambulance came and prayers were said for him as well as a blessing.

Please say a prayer for him and his family.
Posted by Fr. Allan J. McDonald at Thursday, August 06, 2015

I will do, Father. It is such a sad way to die. There really should be no good reason that homeless people are left on the street in the wealthy society we live in. I know that some choose that life but they should be few and far between. A few years ago the local Anglican Bishop spoke in our Catholic cathedral about an idea he had of building a shelter for men that would not be like the night shelter that we have now where the men have to leave in the morning and go back on the street. He envisaged a proper shelter where homeless men could live and training for them would be provided. He has since been posted to the Vatican, so I don't know how far he got with this work but it seemed absolutely the right thing to do and I thought at the time that we Catholics were once at the forefront of such things.

Of course, we have lost so much with the demise of many of the religous orders that provided homes for the homeless and unwanted. One such was Mother Mary Suzanne Aubert, a French nun, who set up an order, the Daughters of Our Lady of Compassion, in the 1800s and established homes for the unwanted in New Zealand and Australia. She took in all sorts of unwanted children, some greatly deformed with diseases that were incurable then, and at the Homes of Compassion she provided a home for them. She used to be seen wandering the streets with a pram where she would pick up the unwanted. A tireless worker they say she used to have very little sleep. Her order has dwindled down to a few sisters and all her work has largely disappeared, except for the soup kitchen for homeless men which she established - against the wishes of the government - and that runs to this day with the help of many volunteers. Her cause for canonisation was put forward in 2010: just one of the many saintly men and women religious who carried out the Church's charitable works.

The 24-hour care that dedicated sisters and religious used to provide, with the help of the laity, is scarely to be seen anymore and it is something that the Church urgently needs to rebuild. The laity do their best but, at the end of the day, they go home to their husbands, wives and families and so the care that is so desparately needed is not being provided as much as the Church used to do.

Lord, have mercy on him and help us not to be blind to the sick and marginalized. May we see Christ in the eyes of the homeless man and woman we pass by each day.

Bless you, Father, and thanks be to God you are an early riser.

Such a tragic and unfortunate situation that some human beings are in. For a reason known only to him and God, he ended up near the rectory where you, Father, would find him. This individual and others like him are much in need our prayers.