IT IS TIME TO STOP MEGA PAPAL OUTDOOR MASSES! IT CREATES MORE PROBLEMS THAN IT CELEBRATES! 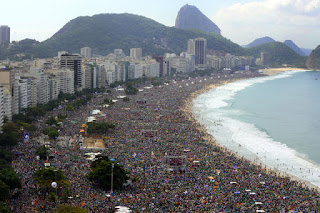 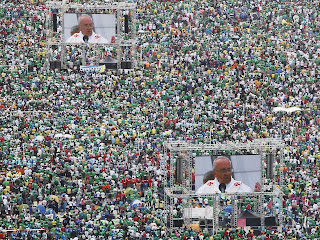 If you go to the pope's Mass on the Sunday His Holiness is in Philadelphia when he celebrates a mega Mass in an unconfined area, you do not fulfill your Sunday obligation if you can't actually see or hear the pope but only on a jumbo television, so says the Archdiocese of Philly which you can read here for all of their warnings!

We've gone from the sublime to the ridiculous as it concerns outdoor mega papal Masses and especially the desire to distribute Holy Communion to everyone who is there sometimes not only in the hundreds of thousands, but millions as in Brazil and maybe in Philadelphia.

I found the papal Masses at St. Peter's Square very well done as it is a contained area. This is also the case when in a stadium. But when in a venue that is not confined and permits a million or more people, the pope needs to say no, I won't celebrate Mass in this venue!

But even in the confined mega Masses at St. Peters and elsewhere, there is this silly desire that everyone in attendance should be allowed to receive Holy Communion. I distributed Holy Communion at the Mass when our Holy Father consecrated the world to the Blessed Mother. I had to go to the end of the square, to the periphery as I normally do in my ministry anyway, but it was chaos in terms of distributing Holy Communion and people taking the Host and passing it back to those who couldn't come forward.

Let us all consider making an especially sincere, devout, and recollected Holy Communion during the present times to make reparation for the sacrilege that will surely take place at these upcoming events.

While you do have a valid point, and other abuses have happened at these mega masses, I'll tell you that your desire is unfortunately echoed in vitriolic senses by the Radicals Misrepresenting Traditonalists. They use these Papal Masses as means to express their quasi or full sedevacantism/hatred of the Holy Father or post-Vatican II church. Not to mention for world youth days, taking away the mass period would make the event dead. I suppose from all individuals/groups registered a select number of maybe 1000 people (out of 100000's) could receive communion representing the faithful.

I watched a segment many years ago from a TV show...I believe that it was a BBC travel show...the "presenter" (star of the show) was in Saint Peter's Square during Holy Mass. She said that she would like to taste the Sacred Host.

She stuck out her hand, received Communion from a priest, chewed the Host, a few seconds later, looked into the TV camera then said something akin to "pretty good...not bad."

The scene was unbelievable to me.

I suppose that the priest in question had simply "followed orders" in that the lady had presented herself to him to receive Holy Communion.

As far as my story relates to Father's post, I supposed that she could have done the same thing at a "contained" indoor Mass...even if she had received Holy Communion on the tongue.

That is, she could have had a TV film crew behind her as she received Holy Communion. She then could have turned to the TV camera as she said, "pretty good, not bad."

However, would/should a priest allow a TV film crew to stand next to and film a person who received Holy Communion.

I find the following interesting: "Progressives" time and again have wreckovated churches to allow congregants to sit as close as possible to altars. We also have many Churchmen who insist upon having people circle the altar during Consecration. There are Churchmen who also encourage people to remain gathered about the Sanctuary during Holy Communion.

The above practices flow from the idea that during Mass, people must congregate as close as possible to the altar to "enhance" the liturgical experience.

However, those same Churchmen favor outdoor Papal mega Masses during which people are literally thousands of feet from the altar.

I thought that "good liturgy" is achieved only when people are able to occupy or sit just a few feet from the Sanctuary?

Oh, well. Get your binoculars ready for Philadelphia.

"The Mass has graces apart from receiving Holy Communion!"

Is the "Mass" grace different from the "Communion" grace?

If so, please describe the difference.

Is this a matter of degrees, as in "more" vs "less" grace?

If so, please describe the "units" of grace you are thinking of.

Wonderful questions! Please answer these for as your assignment and comment back. We await your answers!

Julian, having read your comment above, I can only conclude that your surname is more than usually apposite.

In other words, you're talking through your hat - again. Oh well...

Father is not attempting to quantify Grace; he is merely making the obvious point that Communion of the faithful is not a requirement, and at these sort of gatherings inevitably leads to profanation. Pius X encouraged frequent Communion, but did not relax the Eucharistic fast (nil by mouth from midnight) and he would have been appalled to see the casual way people treat the Sacrament nowadays.

Your last comment was no doubt meant to be flippant. One cannot attend more than one Mass simultaneously. Evelyn Waugh was at Solemn Mass in Farm Street church when he noticed a priest emerging from the Sacristy to celebrate Mass at a side altar. Waugh, who preferred the Low Mass, left his place to attend this Mass. In other words he transferred his attendance; he didn't hear two Masses at the same time.

Is this why churches have multiple altars? I visited Fr. McDonald's parish a couple of weeks ago (which has two side altars) and some churches I've visited in Europe also had them.

What is the reason for them?

Greek, the number of side altars/chapels reflects the increase in the number of so-called 'private' Masses in the second millennium. Since Vatican II the practice has declined but if you visit St Peter's Basilica in the early morning you will see visiting priests celebrating their Masses at the many side altars (there is a booking system) and in recent years more and more are using the older Rite.

The Greek, if you go to Traditional parishes where there is more than one priest, you will find the side altars in use. That is their purpose -- they are there for priests to offer Masses. Oftentimes one finds simultaneous Masses taking place at all the altars in the mornings if there are several priests at the Church.

This reminded me of what happened in that mega-Papal Mass in Manila earlier this year. While Communion was being distributed, the hosts were passed from hand to hand by the communicants to the other communicants who were not able to approach the priests/EMHCs who were tasked to distribute Communion. It was shocking to know that pieces of hosts were found in the mud after the Mass. Despite all of this, the President of the Catholic Bishops Conference of the Philippines denied that desecration was committed. I hope this will not happen again in future Papal Masses.

Speaking of side altars, I think they should be used again. Priests should use them for weekday Masses where attendance would be usually low compared to Sunday Masses. This might be useful for parish churches with more than one nave. Celebrating weekday masses at a side altar might just lower a church's electric bill since only the part of the church where the side altar is situated will be lighted instead of the whole church. What do you think? :D

Fr. McDonald, that's not what Archbishop Chaput has written at all: it's if you're attending a streaming of the Papal Mass in a remote location, such as a church or chapel designated for such a streaming, not if you attend the Mass itself and can only see and hear the Pope on a
jumbotron.

Now I am more than willing to be corrected in my reading of His Excellency's instructions. You know, I hope, from my postings here that I do my best to be obedient to the Church and do not legalistically strain gnats out of convenience. But your interpretation is not the impression I got upon reading it, in all honesty.

On 26 June 1932 an estimated one million people attended a Pontifical High Mass in the Phoenix Park, Dublin, at the climax of the Eucharistic Congress. It was celebrated by the papal legate, Cardinal Lauri, and a message from Pius XI himself was broadcast to the crowd. The PA system was the most advanced used in the world to that date.

The faithful did not receive Communion (apart from anything else, the mass did not start until 1 pm and the fast was from midnight in those days). So they missed out on the deeply spiritual experience of passing the Host from hand to hand and drinking the Precious Blood out of Styrofoam cups. Oh, and the Mass was in Latin. It is difficult for us to imagine just how deprived those pre-Vatican II Catholics were.

I would like to add this to my previous comment: Those priests and laity who expressed their concern and disappointment on how the Hosts were distributed in that Papal Mass in Manila were heavily criticized and ridiculed by other people (even by other priests) for being too rigid, for not respecting the Filipino concept of "bayanihan" (which means "helping each other without asking for anything in return"), and for inventing stories about the Hosts found in the mud. They even used the Pope's "Who am I to judge?" quote in order to justify this sacrilege. I hope I'm wrong, but I have an impression that most of those 7 million people who gathered for that Mass did not go there to worship God, but just to see a celebrity who happens to be the Pope.

Anyway, the Philippines has become a country with a nominally-Catholic majority, thanks to the irreverent liturgies being celebrated in many of our parishes (including game-show style televised Masses of narcissistic celebrity priests), the heavily secularized and relativistic student formation done by our "Catholic" schools and universities, and the obsession of our bishops in making comments about the environment and politics while making weak remarks about Church teaching. Please remember us in our prayers too.

I met a Filipino physician a while back at a local function and said, 'You must have been raised Catholic?' He replied, "Yes, but there is no Catholic Church in the Philippines anymore." We expressed our sadness about this, and then he said, "You know, you are facing the same thing here in America." Other people see it, even if our own Priests and Bishops cannot...