AHHHH!!!! AD ORIENTEM! POPE FRANCIS MODELS, AS DID POPE BENEDICT, THE BEST WAY TO CELEBRATE MASS! AHHH! AD ORIENTEM! THE REFORM OF THE REFORM MIGHT BE ON LIFE SUPPORT, BUT IT ISN'T DEAD YET! 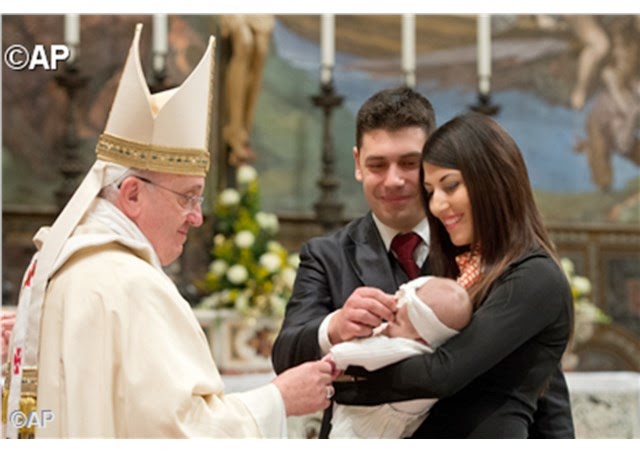 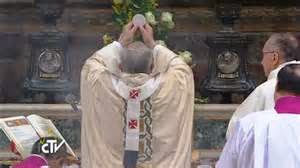 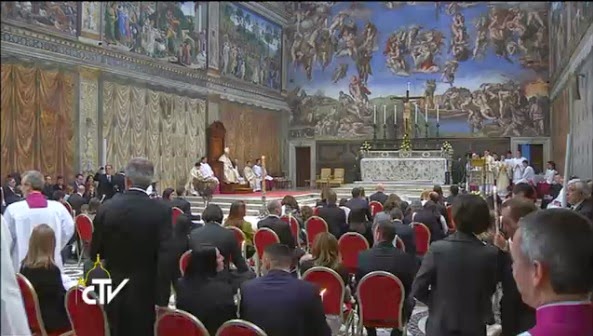 On Sunday, the Feast of the Baptism of the Lord, the Holy Father celebrated Mass with the baptism of 33 infants. As last year His Holiness continued the tradition of Pope Benedict of celebrating the Mass AD ORIENTEM at the historic Sistine Chapel altar, with the Last Judgement above it which depicts a number of prelates condemned to hell.

Pope Francis celebrates the Baptism Mass ad orientem this year, thus giving more encouragement to those who think this is a good reform of the reform! With 33 infants and young parents and a young congregation, this way of celebrating the Mass in continuity with the Mass from which it devolved, makes theological sense and makes clear that the prayers of the Liturgy of the Eucharist as with all prayer, is directed to God the Father, through Jesus Christ by the power of the Holy Spirit. Prayer, praise, worship (sacrifice) and adoration come from the people of God represented at the altar by the priest who simultaneously acts in the Person of Christ, Head of the Church on their behalf. Do the laity, and for that matter, the priests of the Church truly understand this today, especially when priests face the congregation for the Mass and proclaim prayers in a way that makes it look and sound like these prayers are directed to the congregation as some kind of proclamation or lecture?

It's no big deal. Apart from the fact that he doesn't sing and there has been a slight rearrangement of the papal altar in St Peter's, the liturgy and music continue much as before.

How many Catholics in the English-speaking world attend a Mass which is as reverent and objective as that celebrated by the Holy Father, which even in the vernacular has the sung parts in Latin? Precious few, I expect.

All the Masses over the Christmas season were in Latin and there is no indication that Pope Francis has a problem with this. The Church is in a mess and it's not Bergoglio's fault; how he deals with it, and whether or not it succeeds, is a case for debate. But for God's sake let's cut him some slack and stop assuming he has some dubious agenda. We were assured that Piero Marini would be CDS Prefect; instead the job went to a conservative African.

Recent episcopal appointments in the US and UK, and the marked orthodoxy of younger priests point to the future.

On this Baptism of the Lord we should reflect on this sacrament-
this water of God, this water of Divine Love and of sanctification.
By this Holy water, we are initiated into the life of Christ,
admitted as members to His Holy Church, brought into His Mystical Body.
The baptism performed by John the Baptist was one of repentance which was transformed by Christ into one of salvation.
So this baptism was the fulfilling of the Old Covenant and the beginning of the New.

Just as graduation from a college does not follow from admission alone,
likewise our graduation to Eternal heaven does not follow from our baptism alone.
Just as Christ subjected himself to the One who subjected everything to him,
we must also subject ourselves to Christ so that we can know true freedom of the will to choose that which conforms to the Divine Will. Our response to Divine Love, as with our own earthly love,is only valid and legitimate if it is freely chosen. We must conform our will (by free choice) to accord with Christ, whose human will conforms to His Divine Will.
We are not to be slaves to our inordinate desires and passions. Rather, we must allow, by the co-operating Grace of God, the freely available grace of God to engage and direct our wills to do what is right and proper according to the teachings of His Holy Church. In this way are we to complete (with God's grace), what began with our baptism.

As is written in Corinthians 15
As it was by one man that death came, so through one man has come the resurrection of the dead.

Just as all die in Adam, so in Christ all will be brought to life;
but all of them in their proper order: Christ the first-fruits, and next, at his coming, those who belong to him.

Of course it's good for the pope to celebrate Mass well. But I wonder whether it's constructive to speak of the pope "modeling" proper celebration of the liturgy. This has not historically been a function of the papacy. Indeed, in previous eras it might have seemed downright peculiar to take special notice of how a pope celebrated Mass, or suggest that his manner of celebration should be emulated. To to so now seems to me to epitomize how random and rudderless is the liturgy in our troubled time.

Henry is right. It's not the "Papal Missal", but the "Roman Missal", after all.