The damage you see in the photo below is real and it occurred on Saturday night as the filming of a big budget Hollywood science fiction movie continued in Macon. It finished Sunday morning and by Sunday afternoon, major clean-up operations were in progress.

A big city bus was blown up but the aliens used too much explosives and it damaged the building you see. Part of the debris caused a fire near the city auditorium. Oddly enough I happened to be on a roof top of our rectory and I saw a plume of smoke that became larger and larger and had the smell of a real fire! But I thought it was all alien movie magic. But it was for real! 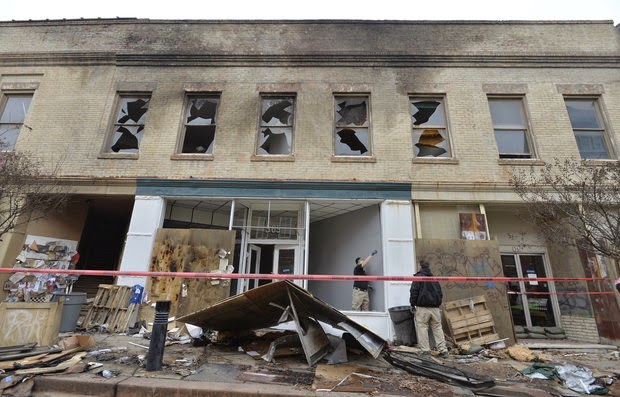 This is the article from this morning's Macon Telegraph! It was written by a Telegraph reporter, Liz Fabian one of our parishioners. However, the aliens have taken over dead bodies and are indistinguishable from anyone else, so I don't know what to make of this article or if the real Liz actually wrote it or not! But I believe the contents to be accurate! I  also have post a WMAZ TV News video at the end:

An exploding bus in the filming of “The 5th Wave” created real-life drama as the massive fireball damaged buildings early Sunday.

“It was a little larger than we anticipated so you do see some broken windows and some damage inside some of the buildings,” said Chris Floore, spokesman for Macon-Bibb County, who was on Cotton Avenue surveying the damage at about 8 a.m. Sunday.

“It will be fully restored the way it was before they came,” Sandefur said. “There have been some property owners that have expressed concern, of course, I mean it was a little traumatic but I think everybody has been satisfactorily appeased by the production company.”

Some of the windows were original to the buildings and can not be replicated.

A burning piece of the bus reportedly shot into the alley starting some debris on fire, as well.
Macon-Bibb firefighters were already standing by and had hoses drawn off-camera to quickly extinguish small patches of flames, said Chief Marvin Riggins.

Inspectors were on the roof tops to make sure no embers ignited the buildings.

“We were staged and prepped for it so we were in place for anything that happened,” Riggins said.
Instead of the whole fireball rising vertically, some of it shot out vertically and blackened the facades of a couple of buildings.

“It was a pretty tight space,” Riggins said.

He wasn’t sure if anyone had gotten pictures or video of the explosion.

“I guess we’ll have to wait for the movie,” Riggins said. “It was a pretty grand explosion.”
The bus exploded at about 3:45 a.m. under the watch of Macon-Bibb Assistant Fire Chief Shane Edwards, who was perched atop the Macon-Bibb Annex in the old Southern Trust building so that he could direct crews on the ground if something went wrong, Floore said.

The fireball broke out windows on the second floors of buildings on both sides of the 300 block of Cotton Avenue, and damaged some first-story windows that were boarded up to look like post-apocalyptic Dayton, Ohio, in the movie’s alien invasion.

Local SERVPRO crews responded at about 5 a.m. and were removing broken glass and boarding up windows until repairs can be made.

“Right now, we’re not aware of anything structural. There’s a lot of smoke damage on the inside, so you do see some soot on the walls where the fire hit it,” Floore said.

The stunts, which also included landing a helicopter near Second Street and Cotton Avenue, had been thoroughly discussed in safety planning meetings, Floore said.

Production crews hit the road at the end of filming, disbanding a mini-commune off Riverside Drive and leaving behind garbage piled up against store fronts. Crews from Southern Equipment in Lizella were hired to haul it all away.

For filming, Cotton Avenue looked like a war zone -- not anything like it did when Robert Thomas was delivering newspapers as a child.

“I just want to see the miracle they’re going to do in cleaning this up,” said Thomas, now a lieutenant in the Macon-Bibb Fire Dept. “The devastation they had, you would have thought it was a Middle Eastern city, demolished. It’s amazing what movie crews can do.”

Jeff Surles hired about 20 men armed with brooms, blowers and other tools.

In about six hours, they loaded about 10 roll-off trash bins containing about 55 tons of trash.

Some of the lumber was salvaged by the League of Creative Interventionists for future local projects, said Jonathan Harwell-Dye of the Macon Arts Alliance, who was helping carry off plywood before the major cleanup began.

“I was completely surprised by how bad it was,” Harwell-Dye said. “It really looked scary. I felt really bad for business owners and folks who live on that street. I hope they get it taken care of as soon as possible.”

Most of the debris had vanished by mid-afternoon when crews took a short break for some Krystal hamburgers and fries.

“It ain’t been bad, the cleanup,” Surles said. “It looked worse than it was.”
Surles was amazed how set designers turned downtown into a disaster area.
“It’s pretty neat how they’ve done this. I can’t wait to see the movie,” he said.

WMAZ's coverage of this alien attack and the real damage they have caused! Again I can't vouch that this reporter isn't an alien in a dead body!

Spoiler alert: Now we know they blow up a bus I guess we won’t need to go and see the movie.

You should demand restitution for the loss of sleep!!!