THE CLAIRVOYANT THAT I AM, I PREDICT THE HOLY FATHER'S EXHORTATION TODAY PRESAGES THE END OF THE HONEYMOON POPE FRANCIS HAS HAD WITH SECULAR AND RELIGIOUS LIBERALS ESPECIALLY MSN!

By John L. Allen Jr.
Francis lamented the “ideological colonization of the family” and defended Paul VI, who upheld the Church’s ban on contraception.
Read more →

I sense that Associated Press is stunned! The Pope is Catholic!

One of the nicest miters the Holy Father has worn! 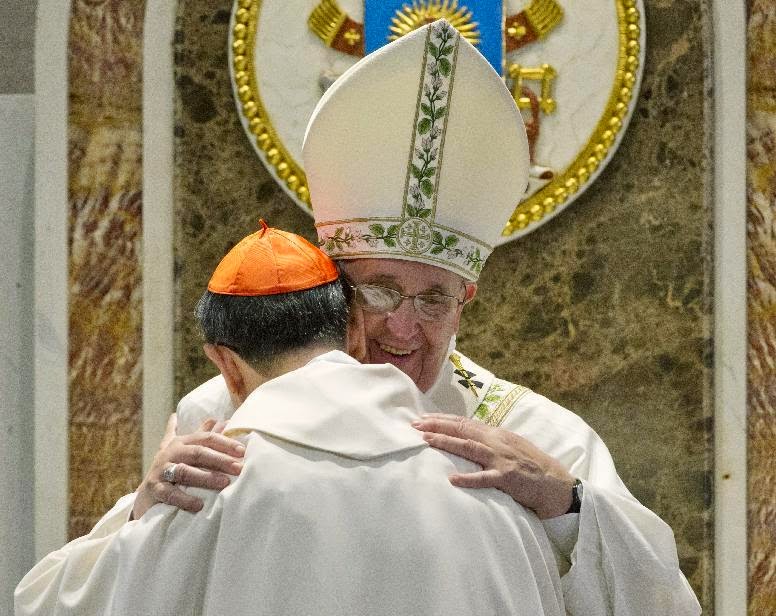 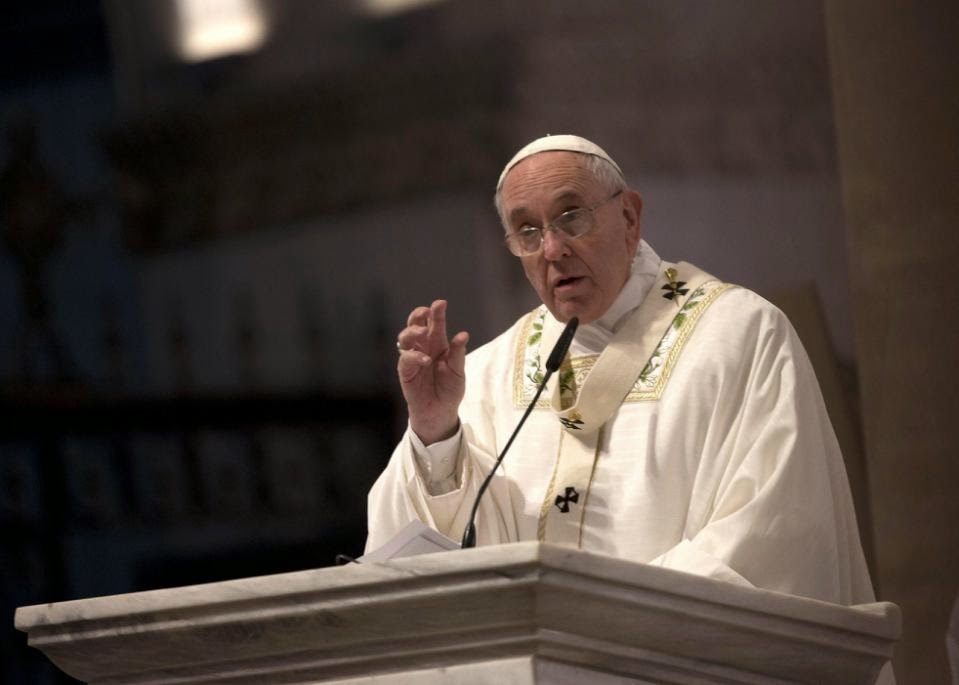 And a very nice fence to keep the lower class laity away from the pope, the altar, the ambo and Holy Communion at Manila's Cathedral! 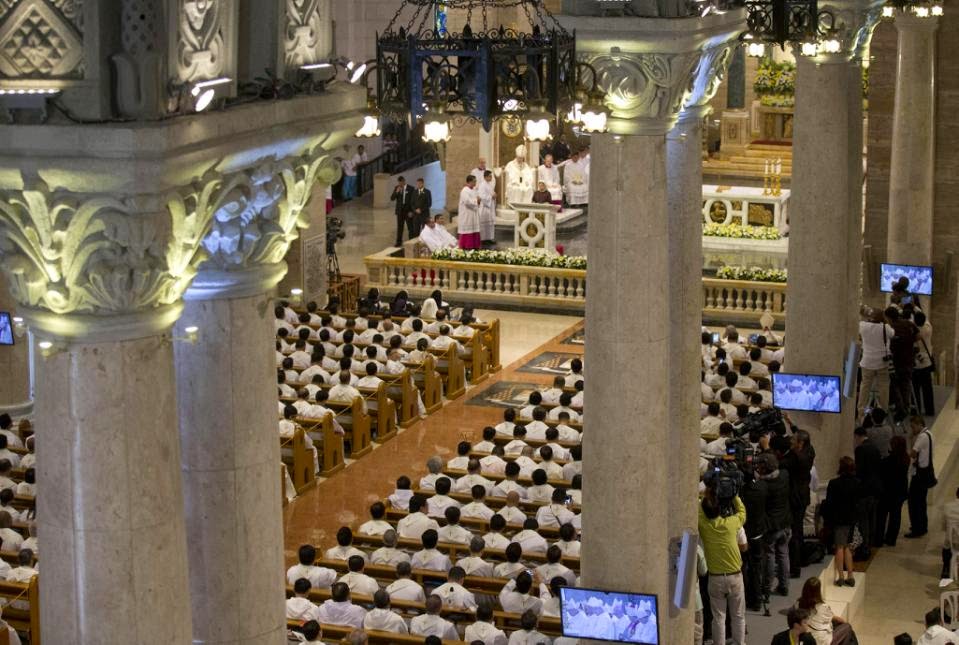 By NICOLE WINFIELD and OLIVER TEVES 52 minutes ago

MANILA, Philippines (AP) — Pope Francis issued his strongest defense yet of church teaching opposing artificial contraception on Friday, using a rally in Asia's largest Catholic nation to urge families to be "sanctuaries of respect for life."

Francis also denounced the corruption that has plagued the Philippines for decades and urged officials to instead work to end its "scandalous" poverty and social inequalities during his first full day in Manila, where he received a rock star's welcome at every turn.

Security was tighter than it has ever been for this pope, who relishes plunging into crowds. Cellphone service around the city was intentionally jammed for a second day on orders of the National Telecommunications Commission and roadblocks along Francis' motorcade route snarled traffic for miles (kilometers.)


Police vans followed his motorcade while officers formed human chains in front of barricades to hold back the tens of thousands of wildly cheering Filipinos who packed boulevards for hours just for a glimpse of his four-door Volkswagen passing by.

Police said another 86,000 gathered outside one of Manila's biggest sports arenas, capacity 20,000, where Francis held his first encounter with the Filipino masses: a meeting with families. There, he firmly upheld church teaching opposing artificial contraception and endeared himself to the crowd with off-the-cuff jokes and even a well-intentioned attempt at sign language.

Francis has largely shied away from emphasizing church teaching on hot-button issues, saying the previous two popes made the teaching well-known and that he wants to focus on making the church a place of welcome, not rules. (My comments: Oh, really????)  But his comments were clearly a nod to the local church, which recently lost a significant fight when President Benigno Aquino III pushed through a reproductive health law that allows the government to provide artificial birth control to the poor.

Pope Francis leads a Mass for clergy at the Cathedral of the Immaculate Conception in Manila
"Be sanctuaries of respect for life, proclaiming the sacredness of every human life from conception to natural death," Francis exhorted the crowd. "What a gift this would be to society if every Christian family lived fully its noble vocation."


He then deviated from his prepared remarks to praise Pope Paul VI for having "courageously" resisted calls for an opening in church teaching on sexuality in the 1960s. Paul penned the 1968 encyclical "Humanae Vitae" which enshrined the church's opposition to artificial birth control.
Francis noted that Paul was aware that some families would find it difficult to uphold the teaching and "he asked confessors to be particularly compassionate and understandable for particular cases."

But he nevertheless said Paul was prescient in resisting the trends of the times.


"He looked beyond. He looked to the peoples of the Earth and saw the destruction of the family because of the lack of children," Francis said. "Paul VI was courageous. He was a good pastor. He warned his sheep about the wolves that were approaching, and from the heavens he blesses us today."
Posted by Fr. Allan J. McDonald at Friday, January 16, 2015

Bam! When the Holy Father speaks like this, I am encouraged. Now if we could see more of this kind of teaching with Clarity instead of the mish-mash of off the cuff remarks, the Church would be so much better off. This is what the Church (and the world) need: Clarity and resolute teaching.

Not a bad start to 2015! So where's that Extraordinary Form Mass where he will be celebrant, or that speech about Traditionalists being all cool in the Church? ;)

This would probably be more meaningful if we had some assurance that this same pope won't call for some sort of way to ignore enforcing Church teaching on contraception at part II of the Synod on the Family.

OK--I'll admit, I don't know just how the Church can "enforce" a teaching when they have no idea who is using birth control, but the point is this: What's the point of defending any of the Church's teachings if, in almost the same breath, you are also willing to give everyone a pass on it? Sure Confessors should be compassionate and understanding, but WHAT does that mean? I know a woman who confessed using contraceptives and the priest said, "Don't worry about it." Is that compassion and understanding or is it just undermining the faith?

I'm waiting patiently for a pope who doesn't confuse the term "pastoral" with "permissive".

I would like to see the Pope yank back on the reins on Cardinal Kasper and the German Bishops and other bishops running around about pushing the envelope with the Synod of the family. Then, then this will have meaning. He needs to follow this excellent teaching moment with decisive action. Actions speak much louder than words.

Imagine if we preach that robbing banks is wrong, but if you are caught, you'll be forgiven and allowed to keep the money?

Come to think of it, this is how the big banks and financial institutions actually behave: get caught in felonies and pay a fine but otherwise keep 90% of the loot.

No one goes to jail. So they have no incentive to stop - just incentive to pay off the feds or be more careful to not get caught!

Similarly, if you preach that X is a sin, but then not tell people to repent but rather "all shucks, it's alright" you do very much indeed undermine the whole moral structure.

Reminds me of a joke: a penitent goes to confession and tells the priest that he's stolen a car but really needs it and is afraid to give it back because he may get in trouble. The priest tells him that stealing is a sin but accepts his remorse and tells him that if he can't return the car, to try not to do this again in the future.

The man gratefully agrees and thanks the priest.

An hour later the priest notices that his brand new car is missing from the parking lot.

Exactly CPT Tom. Exactly. This just doesn't have much resonance when the same man who delivers this message praises a Cardinal who wants to undermine marriage for his "serene theology."

I can't tell you all the number of people - mostly Low information Catholics - who have never read an entire homily or text of the Pope but believe he has changed Catholic moral doctrine with respect to contraception and sex outside of marriage (in that it's now OK to be gay).

It's 'great' they gush that we're no longer judgmental...and then go on to harshly judge the intolerant judgmental pharisaical neo-pelagian conservatives whom they despise for telling them they're been immoral all these years (they all contracept).

No amount of printing and pointing out the context will penetrate their darkness. They heard the TEE VEE heads infallibly interpret what Pope Francis meant back then, so not even the Pope himself can disabuse them of this dogmatic conviction that they are OK no matter what they do or say or think.

All I can do is think of the fickleness of the crowds who praised Our Lord on Palm Sunday and then called for his death on Good Friday.

Speaking of gay marriage, word today the Supreme Court will hear a case on that and decide whether states must recognize it. Certainly Scalia, Alito and Clarence Thomas will not find such a right, but what about Roberts and Kennedy, who are Catholic? Many people (not just Catholics) still feel betrayed by Roberts, who provided the critical 5th vote to uphold the tyranny of Obamacare...if Roberts and Kennedy do find such a right, should they be excommunicated?

Misinterpreting the 14th Amendment is probably not grounds for excommunication.