WHAT DOES THE COVERED BOX IN FRONT OF THE MANGIFICENT HIGH ALTAR TELL A PRACTICING CATHOLIC AND SOMEONE WHO IS NOT CATHOLIC? 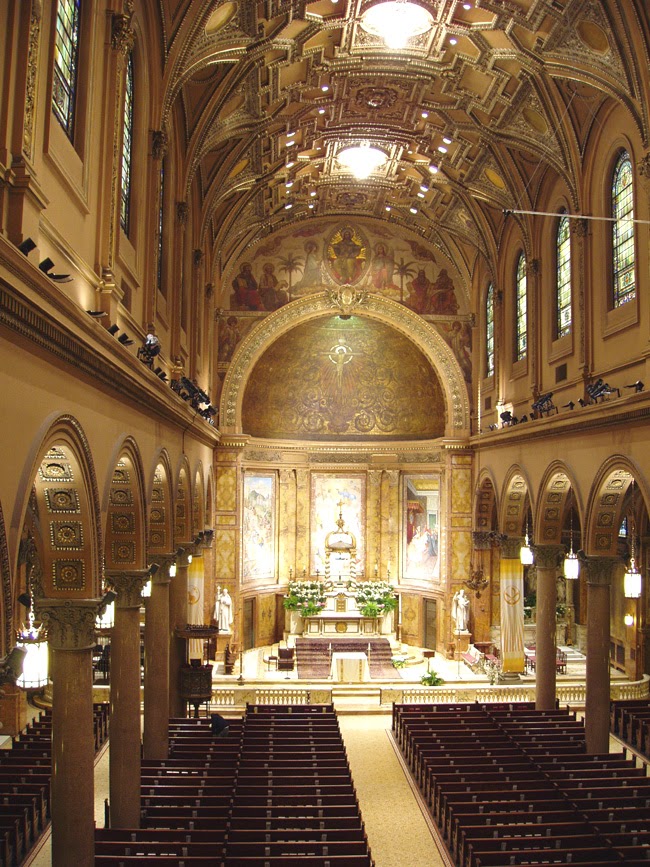 This magnificent Church of St. Ignatius in Manhattan is where Governor Cuomo was canonized. We won't get into the banalities of the funeral Mass or its music as I didn't watch the Mass.

But let's just talk about the photo of the church filled with those who came to pray for the immortal soul of Gov. Cuomo.

It is stunningly beautiful. But look at the free standing altar and the original altar behind it. If you were to ask some of the congregation at this funeral which was the most impressive of the two, which one do you think they would say.

Now ask a 16 year old who grew up with the EF Mass and then one Sunday came in for Mass facing the congregation for the first time and seeing the box in front of the main altar. What impressions would that convey to him?

The high theology of Christ and the Mass has been reduced to something pedestrian, banal and not as important.  What took place on that high altar was more important than what takes place on the lower one. The Mass was demoted as was its theology and doctrine (protest as you may that it wasn't, the sign and symbols say it was)!

Can this explain some of the reasons why so many Catholics don't take the Mass seriously anymore?

"Now ask a 16 year old who grew up with the EF Mass and then one Sunday came in for Mass facing the congregation for the first time and seeing the box in front of the main altar. What impressions would that convey to him?"

Exactly my problem with these added table altars. They immediately create a dilemma, a tension. Taking ourselves to 1964 and Inter Oecumenici, and then also to 1967 with Tres Abhic Annos, would not the natural reaction upon hearing about the new permission for Mass facing the people, and even the seeming encouragement of it from the documents, suggest that a freestanding altar should be set up? And yet, for all that, we don't want to get rid of our high altars, which are pieces of true art and beauty. But if we *don't* take out the high altar, then peoples' attention will naturally want to look at it, and they'll realize that it's nicer than the freestanding one we're using, and there will be no escaping the sense that we've given up something.

And so, this dilemma leads to screens being erected over high altars, freestanding altars being put in the middles of churches, pews being reconfigured, and other kinds of awkward "renovations", all so that we can support an unnecessary liturgical practice of Mass versus populum while keeping our high altars. One has to go, and I don't think it's the high altars.

Sorry if this sounds like ranting, but this has been on my mind quite a while, and your post helped me articulate it.

"The Mass was demoted as was its theology and doctrine (protest as you may that it wasn't, the sign and symbols say it was)!"

The fabricators of the New Order may not have realized that in the liturgy, words count for little as compared with the signs and symbols of ceremony and ritual, which convey the real message, whatever words are said, or whether they’re really meant.

Though my personal suspicion is that those who wished to dilute and de-value the Mass realized this full well, and were guided accordingly in their intentional destruction of what had been so holy.

People tend to value and cherish that which they have had to work, suffer and live for.

Is "the box" the closest depiction of Heaven we can muster? The last fifty years has been spent (wasted?) to make Christ's Church more "open" and "welcoming": "see the Catholic Church isn't so hard and it's not about all those stuffy old men". Has the reform been given enough time? Or way too much?

Perhaps if misguided stewards try hard enough Christ's Church will become so "welcoming" that no one will discern the need to go.

Cuomo unfortunately was part of the "I'm personally opposed, but" generation of pro-choice Catholic politicians (though he had no qualms about "imposing" his views on the death penalty). He and Vice Presidential candidate Geraldine Ferraro clashed with then-Archbishop (later Cardinal) John O'Connor on abortion. While the clash did not have any immediate electoral ramifications---Reagan after all won a landslide 49 states and 525 electoral votes in 1984---it sowed the seeds for politicians to divorce their religious upbringing from their public life. And the seeds of that have not bore very good fruit---just look at all the pro-choice Catholic politicians elected year after year in the Northeast and Chicago, among other places. And the apple of course does not fall far from the tree---his son Andrew, the current governor, got same-sex marriage enacted in New York state within the last year or two.

It is being revealed to Mr. Cuomo whether or not "personally oppose" in conjunction with "publicly permit" holds any sway in a "democracy" with exactly one vote.

"The box" as you put it, tells me that Cuomo was not worthy of a true Catholic funeral Mass due to his poitical views, so "the box" was used instead of the Altar.

I think that 'Inter Oecemenici' (1964) holds a lot of clues. It was the first definitive instruction to come out of the Bugnini Consilium, and was backed by a Motu Proprio of Paul VI. It makes it clear that the changes are interim ones (they could hardly be otherwise, since the ink was hardly dry on Sacrosanctum Concilium). Yet it mandates free-standing altars, Mass versus populum, extensive use of the vernacular, and a lot more besides.

The Council was still in session. Those who think that the interim Missal of 1965 represents the genuine wishes of the Council Fathers are deluding themselves; it was always going to be an interim stage, and already the idea of the priest as a 'presider' and the validity of the mass being dependent on the presence of the faithful is present.

When in 1967 the normative Mass was unveiled in the Sistine chapel, celebrated in Italian by Bugnini himself, only a minority of the bishops present voted 'placet'. Yet Paul VI himself pushed it forward, and it was only the famous interventions of Cardinals Ottaviani and Bacci that saved the Roman Canon and the Orate Fratres, and made sure that the 1970 GIRM made it clear that the Novus Ordo was in continuity with the Council of Trent.

Had this not happened, I don't think I could have remained a practising Catholic, since what I was expected to attend on Sunday would not have been a valid Mass. Of course a future pope could, and probably would have reversed it, and even the Hamlet-like Paul VI seems to have come to his senses; indeed, his encyclicals show him to be orthodox on the Eucharist.

Am I the only one who recalls Pelosi and Biden at Francis I installation mass?

John Nolan, I don't doubt you, but I'm ignorant on the matter, so what documentation do we have that Ottaviani and/or Bacci saved the Roman Canon? I've heard there were plans to axe it, but I'd love to know more. What I've heard hasn't given sources.