ARE REAL MEN TURN OFF AND MADE TO FEEL FEMININE BY SILK AND LACE?

Progressives who decry the homophobia of conservatives often show forth their own homophobia or their disdain for homosexuals when they see silk and lace of the traditional type worn by Roman clergy of whatever rank. Thus CRUX uses the following photo to lambast Cardinal Burke and accuse him of the very thing he condemned in the New Emangelization interview.

David Gibson who writes the article for the Religion News Service, picked up by Crux, seems to imply by caricature Cardinal Burke of being both homophobic and maybe even gay. Does silk and lace make David Gibson uncomfortable or is it a way to silence to good archbishop. Progressives do have their tactics! They can be quite nasty. 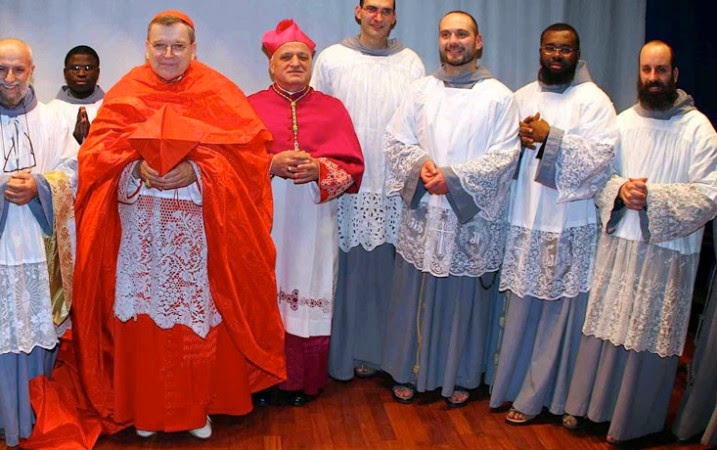 I don't think progressives in the Church would have any problem with this vestment, although Pope Francis might. Which vesture is more offensive to sensitive eyes though?: Women in the Church


Religion News Service January 7, 2015
Cardinal Raymond Burke, a senior American churchman in Rome who has been one of the most outspoken critics of Pope Francis’ push for reform, is roiling the waters yet again, this time arguing that the Catholic Church has become too “feminized.”

Burke, who was recently demoted from the Vatican’s highest court to a ceremonial philanthropic post, also pointed to the introduction of altar girls for why fewer men are joining the priesthood.
“Young boys don’t want to do things with girls. It’s just natural,” Burke said in an interview published Monday. “I think that this has contributed to a loss of priestly vocations.

“It requires a certain manly discipline to serve as an altar boy in service at the side of [a] priest, and most priests have their first deep experiences of the liturgy as altar boys,” the former archbishop of St. Louis told Matthew James Christoff, who heads a Catholic men’s ministry that called the New Emangelization Project.

“If we are not training young men as altar boys, giving them an experience of serving God in the liturgy, we should not be surprised that vocations have fallen dramatically,” Burke said.

The Catholic Church dropped its ban on girls assisting the priests during Mass in 1983, and today it is common to see more girls than boys helping on the altar. Only one US diocese, in Lincoln, Neb., still bars altar girls, though a number of individual parishes have barred them in hopes of encouraging more boys and men to consider the all-male priesthood.

In the interview, Burke also blamed gay clergy for the Church’s sexual abuse crisis, saying priests “who were feminized and confused about their own sexual identity” were the ones who molested children.

Researchers have disputed that claim, and experts note that the reported rise in the number of gay men entering the priesthood since the 1980s coincided with a sharp drop-off in abuse cases.
Burke, 66, spoke to Christoff in December during a visit to La Crosse, Wisc., where Burke served as bishop in the 1990s before being named archbishop of St. Louis. In 2008, then-Pope Benedict XVI called Burke to the Vatican to head the Church’s top court and made him a cardinal. That prestigious position lent weight to his increasingly sharp and direct criticisms of Francis, who succeeded Benedict in March 2013.
In an unusual move, Francis effectively demoted Burke in November, shifting him from his job in the Roman Curia to a largely ceremonial post as patron of the Order of Malta, a global Catholic charitable organization based in Rome.

Vatican observers suspected the switch would actually give Burke more freedom to speak his mind, and in this latest interview, the cardinal doubled down on themes he has often struck: that liberalizing changes in both society and the Church, especially “radical feminism,” have gravely undermined the Catholic faith since the 1970s.

Burke said he recalled “young men telling me that they were, in a certain way, frightened by marriage because of the radicalizing and self-focused attitudes of women that were emerging at that time. These young men were concerned that entering a marriage would simply not work because of a constant and insistent demanding of rights for women.”


He said that “the radical feminist movement strongly influenced the Church” as well.
The focus on women’s issues, he said, plus “a complete collapse” of teaching the faith and “rampant liturgical experimentation,” led the Church to become “very feminized.” That turned off men who “respond to rigor and precision and excellence,” Burke said.

“Apart from the priest, the sanctuary has become full of women,” he said. “The activities in the parish and even the liturgy have been influenced by women and have become so feminine in many places that men do not want to get involved.”

Burke, a liturgical traditionalist as well as a doctrinal conservative who is renowned for wearing elaborate silk and lace vestments while celebrating Mass, also said that “men need to dress and act like men in a way that is respectful to themselves, to women, and to children.”
Posted by Fr. Allan J. McDonald at Thursday, January 08, 2015

I assume that David Gibson and Crux prefer liturgical vestments like this:

The Mass is, of course, a theatrical performance, so I suppose that costumes of some kind are appropriate. Since the last supper is kind of the model for it, why not wear costumes (aka vestments) that reflect the clothing that Jesus and the apostles actually wore, rather than what royalty wore hundreds of years later?

'Since the last supper is kind of the model for it [the Mass] ...' A common misconception. The Last Supper fulfilled the requirements of the Old Law 'observata lege plene, cibis in legalibus' as St Thomas Aquinas put it. The Crucifixion and Resurrection, which give the Mass its meaning, had yet to happen.

The Mass has been described as 'sacred drama' which is not the same as saying it is 'a theatrical performance'.

It's astounding that so much ignorance can be crammed into a mere two sentences.

I'm fear you were led into a trap.

I think the cat is out of the bag...not like we are going to turn around and tell women to get off the altar, whether as altar servers or Eucharistic ministers. Never heard anyone at my parish of 6,000+ about 95 miles up I-75 from St. Joseph's complain about women on the altar...in fact, our pastor recently was urging women to sign up as ushers, whom are almost all-male at my parish. (Our bishop even washed the feet of a woman at a Holy Thursday service years ago---not saying I approve, but I did not hear many laity complaining about it.)

Maybe that is part of the informal exchange of ideas we have with the Episcopal Church. They started allowing women to serve as acolytes, then we did. Then, when we started to move our altars from the back to the front, so did many of their parishes.

There can be extremes on both sides when it comes to clerical dress---I find it odd when cardinals are wearing choir dress that is feet long---a bit overdone in my view---but at the same time for the Mass, a chasuble should not be the gaudy, awful-looking one of this blog---reminds me of some article about how awful-looking the vestments are of the (very liberal) presiding bishop of the Episcopal Church, Katherine Schori.

Katherine Schori does not believe that Jesus is the Son of God. She said so in an interview. These people are the enemy…wake up, folks.

Anonymous: plenty of laity complained about altar girls and were rudely shouted down by clergy and liturgists (not argued down, not patiently shown by facts and theories to be wrong....shouted down as bigots, sexists, etc.)

I think altar girls will fade away in orthodox parishes to be replaced by boys who will be actively recruited for vocations.

We forget the demographic bell curve that is about to hit home across the country in the next 10 years.... a huge number of priests will retire and not be replaced. It is indeed a crisis and the solution is an 'all hands on deck' approach to maximize EVERY vector of priestly vocations available to us.

The whole "inclusion" of girls was originally planned to lead to women priests - not everyone whose daughter serves thinks this, but the agitators who promoted it most certainly did and do.

It's liturgically pointless. Liturgy is not about mere function, it's about symbolism and final causality. Catholic priests are male. Close service to the altar ought also be male as the Crucifixion of the Son of God took the place of Adam who refused to risk his life to save Eve.

Boys are hard wired to save princesses and fight dragons. What in the world do you think the altar and cross represent if not the final victory over the dragon on behalf of the woman?

More lace, more cassocks, more cappa magnas, more ornate vestments (Though I like the Russian style more than the Roman)

Gene believes that the Consecration has nothing to do with the priest who says "This is my body". "This is my blood".

Ah, Anonymous, you have hit on an interesting theological issue (accidentally, I am certain). Apparently, you believe that by uttering a few secret words the Priest changes the bread and wine into the Body and Blood of Christ. So, you believe in magic and the Priest is the ultimate Magician. I'll bet you've never missed a David Copperfield show...

@Gene: Magic does not bring about any true effects, but rather the appearance of effects.

What concerns the instant of exercised intended act on the part of one consecrated truly effects that which is signified.

Of course, Faith in Christ's promise is a totally distinct order than 'belief' one has seen what actually was not truly seen, but rather seemed to be seen through so-called 'magical' manipulations.

Gene, agree with your comments from a few days ago on Ms. Schori of the Episcopal Church. Unfortunately, she and two of her immediate predecessors, Frank Griswold and Edmund Browning (going back to mid 1980s) have been disasters for that Church as presiding bishops, which gets more and more liberal as it loses more and more members---down to about half what they had at their peak in 1965. Episcopalians choose a new presiding bishop at their triennial convention later this year---hard to imagine their next presiding bishop could be any worse than her.

Furthermore, it would be nice to believe the tensions in that Church are North V. South (the liberal Northern Episcopalians trying to impose their views on the more conservative southern ones), but unfortunately the liberal trend is infesting even the southern ones. Here in Atlanta (Episcopal Diocese of Atlanta, which also includes Macon and Columbus), they have a far-leftie as bishop, and same-sex rites are becoming the norm here---just check out their website under photos.