This makes all things possible! 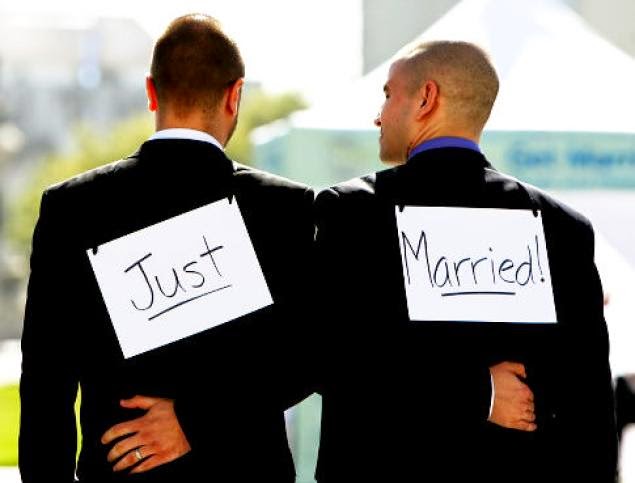 Did anyone ever doubt that the Gay lobby on marriage would motivate others in their individualism and desire to tailor marriage to their own perversions, oh I'm sorry, I mean orientations?


Woman plans to marry her father after two years of dating

An teenage revealed in an interview that she plans to marry her father and have children after dating for two years.

The unnamed 18-year-old revealed in New York Magazine the relationship with her father when she was young and how she fell in love with him.

In the interview, the girl also says the two plan on having children.

The woman says he father was in and out of her life mostly when she was young. She recalls wondering where he was and why she hadn't hear from him. There was no contact for 12 years and she did not finally meet him again until she was 17.

Her father reached out to her on Facebook when she was in high school and soon after, the woman went to stay with him for a week.

After the week, the 18-year-old revealed they had sex and were dating after.
Many people were aware of the situation.

"Everyone on my mom’s side of the family sees us as father and daughter," she told the magazine. "Those who know that he’s my dad, and that we are engaged, include my father’s parents (they can see we are happy together and they can’t wait for us to have babies — they treat us just like any other couple), the woman we live with, and my best friend."

After the wedding, the woman says they plan to move to New Jersey where adult incest is legal.
Click for more from New York Magazine.
Posted by Fr. Allan J. McDonald at Saturday, January 17, 2015

This sort of news should come equipped with barf-bags.

Wow! Just another story showing the world is going to hell in a hand basket. Natural law is going to right out the window. What is it gonna take for these people to see that this is wrong?

How about with a goat or the mammal of one's choice? I'm sure that's up next...

Arguably, everything "leads to" something else.

By that logic, men and women should not be allowed to marry -- because of what it will lead to. :)

In any case, the New Jersey story is an absurd freak-show case that should not influence a serious issue. Sadly, we had incest between fathers and daughters for millenia, before there was legal gay marriage.

And finally, just noting that JBS seems to suggest that father-daughter incest is less objectionable than gay marriage. Yes, pass the barfbags.

Yikes.....kind of like when an ordained priest of God abuses an altar boy. Thank you molester America! Here we go! WEEEE!

Daniel, we all know that people want to marry this, that and the other, the problem is the legalization of unnatural sexual appetites and calling it marriage, which it isn't. In the natural order, a daughter marrying her father, even if legal, is not marriage. It goes against natural law.

Yikes, there are groups of pedophiles who want to legalize their perversion by calling it an orientation they were born with. I would suspect too, there are those who would like to lower the age of consent for sex to 13 year olds. In fact in my memory, 13 year olds could get married in South Carolina with parental permission to a man much older. Today we call that ephobophilia which is the #1 problem with those priests who abuse young people, it is directed to teenagers. So if it is legal, anyone clergy or laity, Protestant or Catholic or Jewish would be let off the hook. A good idea?

Father McDonald, I understand the argument that as many as 10 percent of our brethren have sexual orientations that the church considers "unnatural." While we may believe that, we can not show that relations between consenting, non-related adults are harmful to them or to society. Unlike incest, child abuse and other aberrations. Many other churches takes that position. My position is that if the Catholic Church does not want to marry gays, the government should not force them. And if other churches believe that it is right, then as a matter of religious liberty, the government should not prevent them. Seems simple enough.

the judicial system with the help of the manipulation of the entertainment media and the gay lobbies has redefined marriage. Churches, apart from the Catholic and Orthodox Churches, have simply acquiesced to the wishes of our secular religion. It did not start as a religious movement at all.

So I suspect that you would be open to 13 year olds marrying older men if it is legal and churches do it and polygamy and even beastiality as marriage? Eh?

The objection to nonsensical couplings is not on the basis of the harm done to the individuals involved, but to the harm done to a public society asked to declare: "we the people officially recognize this man and man [or whatever unnatural arrangement] to be in a true state of matrimony". When a society lies, it is harmful to the society.

Father, note my reference to consenting adults. Legally, it makes no sense to equate gay marriage to child abuse or incest. As I said, we can objectively show that those are harmful to a child, who is not able to consent. Grasping at straw-men suggests a lack of stronger arguments. Ask your ecumenical brethren whether they consider their right to marry a religious issue. Again, I believe the Catholic Church should be free to go its own way but not to impose its interpretation of "natural law" on other groups.

Daniel:
If you don't accept the revealed teachings of God, whose teachings are embodied in the Magisterium of His Holy Church, I and others can only pray for you. Many today accept the teachings and philosophies of men. These teachings and philosophies, like the men who proposed them will one day pass away. If your conscience is the arbitor of your decisions on moral matters, know that it will one day pass away because the day will come when it will no longer be of any use to you (at your passing). Can you not look around and see what happens when man follows his own inclinations and false teachings? Can you not see the example of those true faithful who are in religious communities and Churches, and not see that following God's teachings can provide good benefit to transform our fall human nature into the image and likeness of our Creator? Only the Word of God, the instructions He gave us, are true and reliable because our God is Truth itself. His teachings are the true and reliable guide for us which will never pass away and which will remain to guide those who will heed them until the end of the Ages.

Can we all at least agree that Labradoodle's should not exist?

"the judicial system with the help of the manipulation of the entertainment media and the gay lobbies has redefined marriage."

Well, that's just not so.

"In the ancient world, marriage served primarily as a means of preserving power, with kings and other members of the ruling class marrying off daughters to forge alliances, acquire land, and produce legitimate heirs."

"Most couples are of the same race. But it is only since the Civil War that African Americans were allowed to marry anywhere in the U.S."

"The 18th-century English jurist William Blackstone explained, "By marriage, the husband and wife are one person in the law; that is, the very being or legal existence of a woman is suspended, or at least incorporated or consolidated into that of the husband, under whose wing, protection, or cover she performs everything."

"The Greeks also had laws regarding marriage. In that culture the parents decided who you were to marry. Upon marrying, the wife, who was treated as property, became part of her husband’s family. At that point, the wife belonged to that family. Marriage was a serious matter for the Greeks."

"In 18th century Scotland, perspective grooms were required to ask the government for permission to marry. The government agents’ approval was established by law."

From the original article:
"Those who know that he’s my dad, and that we are engaged, include my father’s parents (they can see we are happy together and they can’t wait for us to have babies — they treat us just like any other couple), the woman we live with, and my best friend."

Funny she doesn't mention what her mother thinks of it.

And, "the woman we live with?"
What?
So, there's another "woman" in this scenario too?

I agree with Carol H above. This sort of news should come equipped with barf-bags.

JBS: I agree. Down with labradoodles and their creators!

JBS, I can certainly agree about Labradoodles…but, what if some guy wants to marry one?

"Do you believe church teaching on divorce should be the law of the land?"

I believe that life and society both now and on down the road would be far better if it was.

I also believe the same about "Roe vs Wade" and "Doe vs Bolton" vs. Church teaching. God's law should take precedence and man's law should conform to it, as it still does in many cases (murder,stealing etc.).

The fact that in our modern world man's law doesn't conform to God's on major issues of moral behavior( abortion and same-sex marriage) elicits no change of opinion from me. These things will do great harm to our society ,as we can observe in the case of four decades of legalized abortion.