A NEW EXTRAORDINARY FORM EXPERIENCE FOR ME! AND THANK THE ALTAR RAILING FOR IT 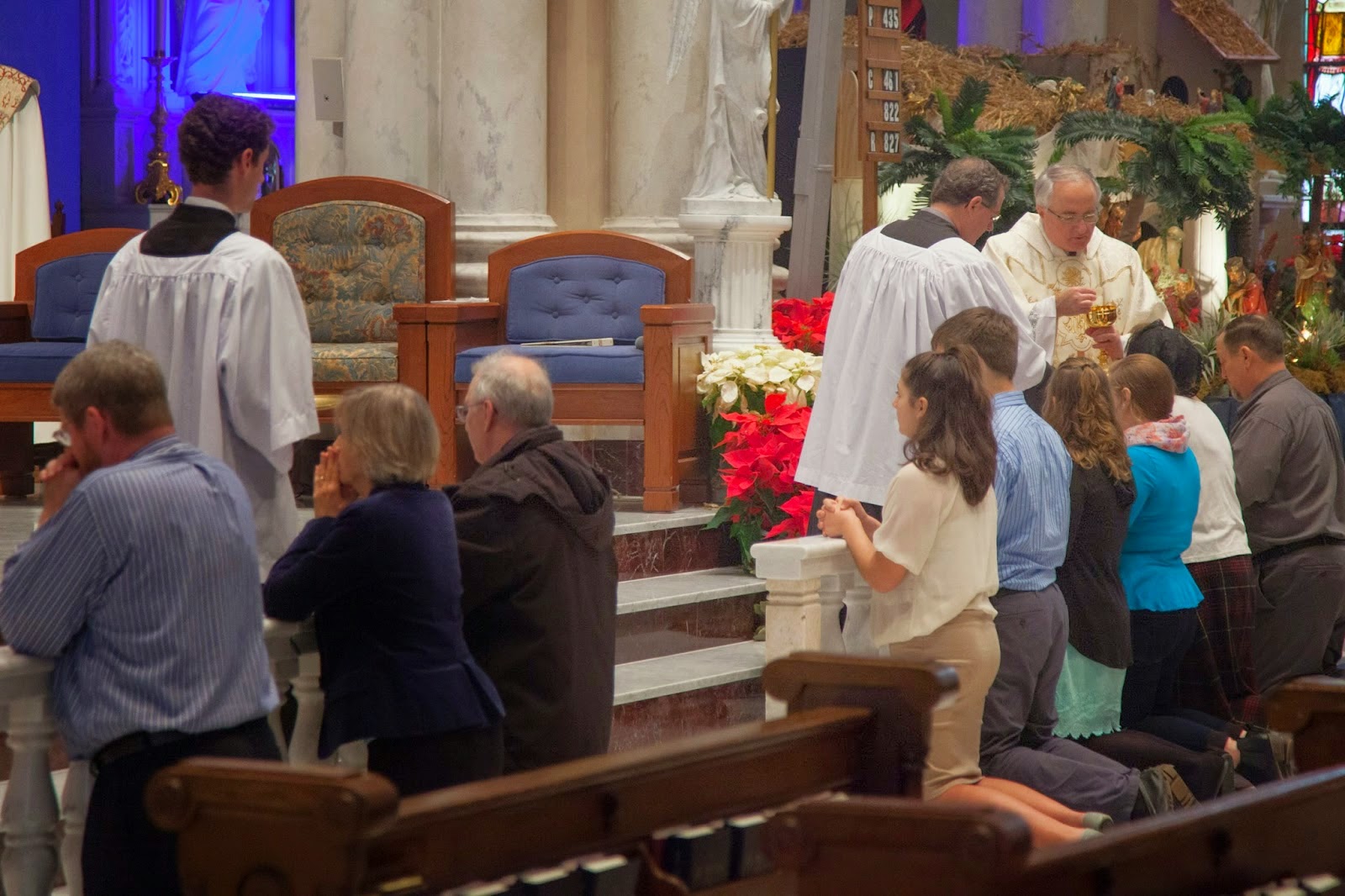 This past Tuesday at our every Tuesday EF Mass at 5 PM, I instructed the congregation to do the following (we had more people than usual at this Mass for some reason).

When I was a child, my recollection of the Mass of the Ages at Communion time was that the laity began to approach the altar railing and actually line up in the aisle at the priest's "Domine non sum dignus" and the priest's conclusion of the Sacrifice, its ratification if you will, when he consumed the Holocaust, the Body and Blood of Christ under the form of Bread and Wine.

Then the priest would turn to us for the Ecce Angus Dei and our "Domine non sum dignus" and the laity at the altar railing were already kneeling, but as soon as the priest turned to the congregation with the Host over the ciboruim for the Ecce Agnus Dei, everyone standing in the aisle dropped to thier knees for the "Dominie non sum dignus." This really impressed me as a child. It pointed out to me something very important, that in the presence of the King of the Universe, our God and Lord, Jesus Christ, we must fall to our knees! Yes, it made a huge impression on me and I can see photos in my mind about it from my childhood.

So I instructed our Tuesday EF crowd to do the same, come forward at the priest's "Domine non sum dignus" and be already at the altar railing, now that we have one!

I have to say that when I turned to the congregation with most of them kneeling at the altar railing (and for the first time as a priest-celebrant of the EF Mass) and saw them there kneeling, it was very dramatic in its look of reverence, the modeling of awe and reverence and was very moving for me personally.

I hate to renounce my 1970's theology of standing and coming to Holy Communion as if in some sort of army chow line, but we blew it when altar railings were removed and standing became the norm for Holy Communion. There is still time to repent and return to the Lord in his fashion.
Posted by Fr. Allan J. McDonald at Friday, January 23, 2015

Father,
Two questions. Is the cushion going to extend to the end of the altar rail? And can we kneel more than one at a time during the ordinary form? I've been to Methodist churches that do that, going one row at a time.

Well, of course, everyone standing who believes it is the Body and Blood, Soul and Divinity of Christ really present, would drop to his knees when the Host is exposed to view at the Ecce, Agnus Dei--whether then or now, whether at EF Mass or OF Mass.

Does not a failure to kneel in adoration at this moment betray a lack of full belief in the Real Presence? How is any other inference possible?

I have to say, since gestures mean something, that kneeling against a cold marble railing quietly awaiting my turn has a much more solemn feel to it than shuffling forward in line trying not to be distracted by people ahead or next to me.

It also allows a period to reflect quietly with the eyes closed (not safe to do while shuffling forward!) and say those little silent prayers of petition, of apology, of thanksgiving and of praise that we all have during such times.

Then there's the much more natural feel of receiving our Lord on the tongue rather than in my hands - after all, we the laity don't ritually purify our hands at all during the Mass....so it makes much more liturgical sense to receive on the tongue when kneeling than not.

I hope to seek the bishop's approval for using the full length of the altar railing for our 12:10 PM Ordinary Form Ad Orientem Mass. I think that he deserves that courtesy as the primary liturgist of the diocese.

And yes, there will be a full length kneeling cushion. We expect it in early February.

It is possible that people could line up at the altar railing either kneeling or standing in the Ordinary Form, but there could be a tripping hazard if people aren't careful when they move away from the railing.

My experience with liturgical matters in general is that no amount of arguing for some practice can compare, even remotely, to actually EXPERIENCING it. I'm glad you got this experience, Father! :)

Henry, certainly most parishes in the Ordinary Form kneel for the Ecce Agnus Dei but at our pews. No one approaches the altar or lines up in the aisle prior to it anymore as was the case in the Mass celebrated the way it was prior to Vatican II. I'm not sure what happens today in parishes with an EF Mass and an altar railing or if those who now celebrate it know of the practice that I described in my post.

"I'm not sure what happens today in parishes with an EF Mass and an altar railing or if those who now celebrate it know of the practice that I described in my post."

I think this practice is common but not universal at EF Masses. The bell that was/is sometimes rung at the priest's communion was generally regarded as a signal for the people to come forward for their holy communion.

Incidentally, it strikes me as a bit curious to mention an EF priest's instructions or knowledge of this practice--since how the people participate is really up to them rather than him, micromanagement of the people's manner of participation being really a distinctively Novus Ordo (liturgists) phenomenon. In the old days, I don't recall any priest ever saying (or even suggesting)—nor, for that matter, a priest asking his bishop--anything about how people should act at Mass. I guess children learned by observation of their elders, and thus traditional practice continued unchanged decade after decade.

As someone who has experienced the Vetus Ordo then and now, could I be permitted to contribute the following?
1. The triple bell at the priest's Domine non sum dignus was not, and is not, the signal for the faithful to approach the rail. They do so after the Ecce Agnus Dei and their own Domine non sum dignus.
2. The bell to call the faithful forward was instituted in 1967 when the priest's Communion and the Communion of the faithful were conflated.
3. The only time the faithful moving forward need to genuflect is when the Blessed Sacrament is carried past them, if for instance Communion is given to those at the back of the church.
4. It is understandable that people have forgotten, or never learnt, the conventions concerning the old Mass. This actually works in reverse; the postures recommended in the Novus Ordo actually applied for the most part to the older Solemn Mass (although in the NO one stands after the doxology of the Canon rather than after the elevation of the Chalice). Yet go to an EF sung Mass today and you will find that nearly everyone kneels for most of it - a Low Mass practice dating from the time when people made their private devotions during Mass.
5. This was also common before the Council, since the rubrics concerned those who were in the sanctuary and were not enjoined on the faithful. The OF can certainly influence the EF in this respect.

At my parish in Pickering Ontario (St. Isaac Jogues) our pastor, Father Dobson, has two prie dieu on either side of the two clerics (priests, or deacons) who distribute communion.

The congregation may receive standing, in the hand, standing on the tongue, or knelling on the tongue. It is orderly and respectful. We have a senior choir, a youth choir and a gregorian chant choir.

My custom is to kneel and receive on the tongue as I find it more reverent and worshipful. Fr. Dobson celebrates a mass in the extra-ordinary form once a month.

He has revealed to me how the Church can be renewed through reverent masses. Deo Gratias.