WHERE IS THE MEDIA AND WORLD'S OUTRAGE OVER ISLAMIC TERRORISM IN NIGERIA WHERE 3000 SOULS HAVE BEEN MASSACRED? 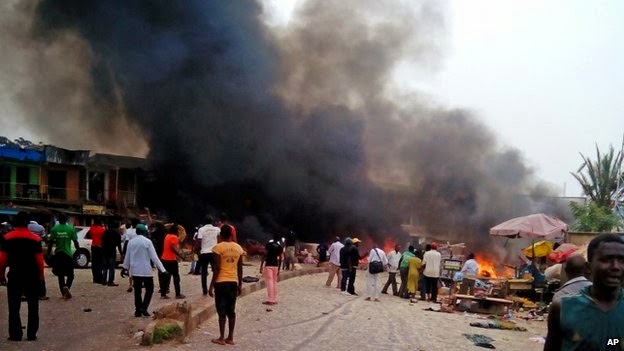 When it comes to racism, the world neglect of Africa and Islamic terrorism there is stunning! Boko Haran has massacred thousands in Nigeria! Thousands! Have you seen the obsessive kind of news coverage about it compared to what we have seen with the Paris terrorism events?

This is from BBC:

On Sunday, two female suicide attackers killed four people and injured more than 40 people in the town of Potiskum.
A day earlier, another young female suicide bomber, reported to be 10 years old, struck in the main city of north-east Nigeria, Maiduguri, killing at least 19 people.
'Sadness'

Archbishop Kaigama said facing down Boko Haram required international support and unity of the type that had been shown after last week's militant attacks in France.
"We need that spirit to be spread around," he said. "Not just when it [an attack] happens in Europe, but when it happens in Nigeria, in Niger, in Cameroon.
"We [must] mobilise our international resources and face or confront the people who bring such sadness to many families."
Posted by Fr. Allan J. McDonald at Monday, January 12, 2015

And this from Pope Francis a few hours ago condemning such acts produced by “deviant forms of religions”:

“Religious fundamentalism, even before it eliminates human beings by perpetrating horrendous killings, eliminates God himself, turning him into a mere ideological pretext”

Fr. Michael J. Kavanaugh:
It's not that the story hasn't been reported, because obviously if it wasn't Fr. McDonald couldn't have noted the issue. The problem as I see it, is there is not the level of outrage and media attention to the horrendous genocide in Nigeria (and other places) as is being given to the incident in France. Today the nightly television network news spent over 15 minutes of its newscast on the French attack. That is the same on every station. The PBS stations are devoting much of their time not only "reporting" but on "discussion" with "experts" to flesh out the issue. There is a tenor of urgency and high concern in all the reporting. So, the lives of 12 European "journalists" (and I use that term loosely) and some shoppers in a Jewish store is more urgent and horrifying than over 3000 killed mercilessly in Nigeria.
It shows the bias of the media, that when one or some of their own are killed, they use the power of the press to generate outrage in others, but do not do the same with worse crimes.

I agree with you. While NPR reporting displays an obvious political bias, it must be given credit for offering substantive news from around the world (although BBC World Service is best for international news).

Other news outlets, such as the popular Fox News, offer mostly fluff, delivered in large part by men who are more comedians than journalists, and women who are consistently not unattractive.

NPR is serious news, while Fox News is just entertainment.

You are correct! One law of human nature is that the closer other people are to us, the more they resemble us, the more we seem to care about that. Why does one Ebola death in the US get more attention than many thousands in Africa? We all know that 3,000 Americans died in Iraq. How many Iraqis have died in that war? It's close to 100,000, most of them innocent bystanders.