IF YOU WORK FOR THE CHURCH, YOU COULD BE FIRED FOR SUPPORTING ANTI-CATHOLIC SECULAR BELIEFS AND AGENDA 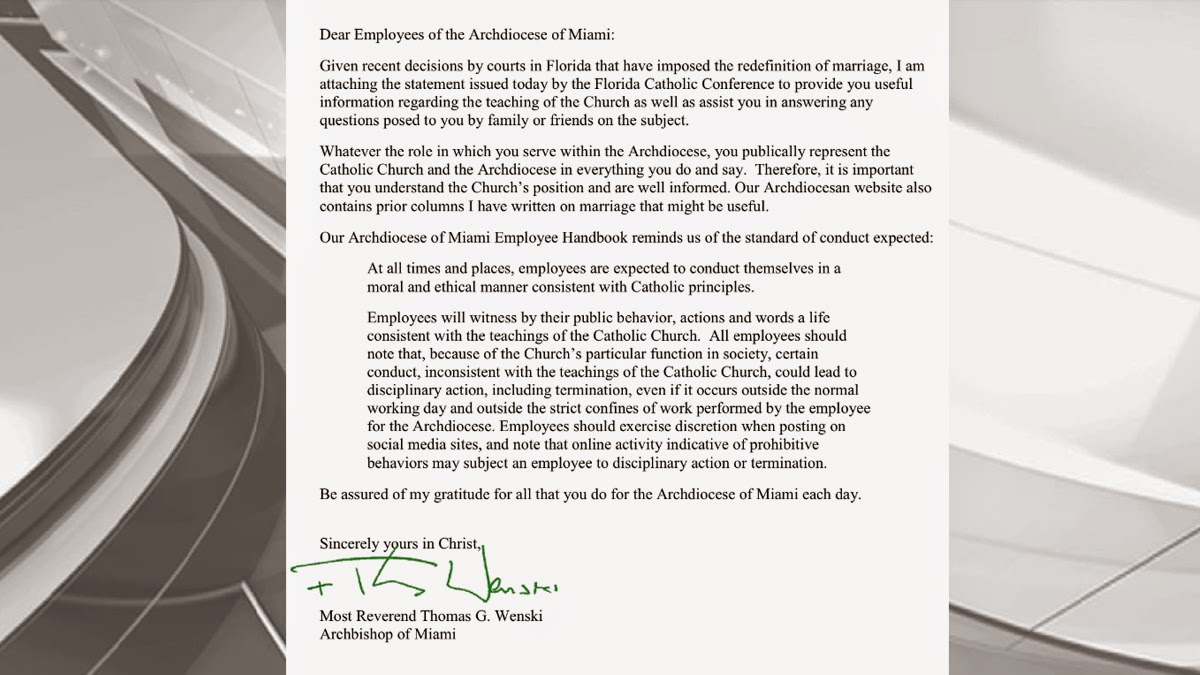 January 6, 2015 by Deacon Greg Kandra
Kathy Schiffer has the scoop:

Archbishop Thomas Wenski, archbishop of Miami, has warned archdiocesan employees that any action in support of Florida’s now-legal same-sex marriage could cost them their jobs.
“Because of the Church’s particular function in society,” the archbishop wrote, “certain conduct, inconsistent with the teachings of the Catholic Church, could lead to disciplinary action, including termination, even if it occurs outside the normal working day and outside the strict confines of work performed by the employee for the Archdiocese.”
The policy extends to include posts (photos or comments) on social media sites.

Visit Kathy’s blog for the rest.

OMG! A Bishop with a spine! What's next? A Bishop who supports SP?

I wonder if an employee who has a gay child or grandchild who was in a relationship would be required to reject them...disown them....

some of us have nice relatives who are serial adulterers, it's a part of their sexual make-up and no one makes us disown them, so I doubt gay children in a relationship will cause the church to ask anyone to disown them. Love the sinner, hate the sin is our way or has that changed?

Please name one Catholic institution anywhere in the world that has such a requirement.

Anonymous @2:11PM, don't exaggerate. The Church does not teach that gay children or grandchildren should be either rejected or disowned. It teaches that homosexual acts are disordered and that marriage is between one man and one woman. Anyone who works for the Church and who openly opposes these teachings, through their actions, creates scandal, which may be grounds for dismissal.

Conduct inconsistent with Catholic teaching could lead to termination....The following is not hypothetical...it's the truth:

On the “reject” or “disown” point, I suppose it depends on

(2) The wording of the morals clause in the contract and how it is interpreted.

So, the matter is difficult to address in the abstract. We can, however, put some hypothetical cases and ask how they might be decided in light of a morals clause. Thus in March 2014, for example, according to a news report in my files the Archdiocese of Cincinnati adopted a clause proscribing the following:


I do not know what “improper use” and “public support” are supposed to mean here. For example, focusing on the homosexual lifestyle provision (which seems somewhat inartfully drafted anyway), how would the following cases be decided?:

(2) Employee does not attend wedding of homosexual child but posts information and/or photos of wedding on social media;

(3) Employee posts statement on social media that Employee is glad that homosexual child is in a stable and loving relationship.

(4) Employee has dinner in restaurant with homosexual child and partner and a parishioner interprets this event as endorsement of the relationship.

(5) Does it make a difference in any of the above situations if the homosexual person is not a child but a grandchild? A friend? A spouse’s friend or work colleague?

(6) Does it make a difference if Employee makes it clear publicly that despite these actions Employee supports the teaching of the Church on homosexuality?

(7) Does it make a difference if the parties to the same sex marriage are in fact celibate?

(8) Does it make a difference if no-one outside of the immediate family actually “knows” whether the homosexual partners are celibate or not?


I could go on but I think the point is clear. There is a substantial risk of uncertainty and ambiguity here. And the same is true of the other situations mentioned in the morals clause. The lawyers may have a field day but can’t we do better at clarifying what violates the clause and what doesn’t? Is this already being done in employee policy manuals?


Anonymous @2:11PM:
" I wonder if an employee who has a gay child or grandchild who was in a relationship would be required to reject them...disown them...."

No more than expecting an employee to disown a child or grandchild that belongs to a New Age cult or some other group or religion whose
beliefs and teachings run contrary to the Catholic faith. The operative principle is:"Is the employee doing or saying something which undermines
Church teaching?".

Here are some more cases that have occurred to me:

(9) Employee writes in newspaper or posts on social media that Employee hopes the Church will change its teaching on the proscribed matter.

(10) Employee “publicly supports” or uses artificial birth control (Note the language “includes, but is not limited to”).

(12) With respect to conduct that is “engaging in” or “using,” who bears the burden of proof? What is the standard of proof? For example, an aggrieved spouse accuses Employee of adultery. I imagine these matters are addressed elsewhere in the employment contract or in the rules governing termination

And the minions keep testing the walls and prodding the defenses as if any of the toiling and semantics can change Truth.

Everyone is born as some way and many (most?) of those ways should not be embraced or celebrated. We are called to endure and strive to reject and replace those ways with The Way.

The thought of "Love the sinner, hate the sin" appears to be inconceivable to those mired or have a vested interest in sin.

There is a fine line between "enabling" and "loving." Parents, today in particular, with their adult children, are quite the enablers. Would that prevent you from being hired in Miami? I think it depends. Maybe, particularly if you enable sins against natural law and publicly. Loving your daughter and her children (the question who is the mother???) is another question.

I have now read the relevant Miami Archdiocese Employee Handbook provision that is linked in the article linked in Father’s post. It seems no clearer regarding the disposition of the hypothetical cases I listed above. So, I really do hope that the Church’s lawyers are looking at these sorts of provisions (which vary in their wording around the country) very closely with a view to clarifying their application so employers and employees can know where they stand. Otherwise I fear we can look forward to some high profile and messy litigation when employees are terminated and the provisions get tested (even if this is actually all about same sex marriages and not much else in practice).

P.S. Anonymous and George both raise important additional dimensions to the problem:

(2) Conduct that implicates Catholic teaching on matters of faith instead of morals. Here we could generate yet another entire set of hypothetical cases to demonstrate the uncertainty and ambiguity in the application of these sorts of provisions.

I hope that my concerns are unjustified but unless people can be assured that good sense and good judgment will be used in actually operating such provisions, I foresee the risk that a witch hunt mentality will develop. Am I wrong about that?

It is not a big stretch to imagine that "being a liberal" could fit into the Bishop's prohibitions, and cost somebody his or her job.

If there are witches, we need witch hunts. Being a liberal usually means pro-abortion, pro gay marriage, pro-women priests, pro any kind of sex with any consenting mammal at any time and any place. They need to be out of the Church. Screw lawyers and BS wordsmiths. They can go with them.

“They need to be out of the Church. Screw lawyers and BS wordsmiths. They can go with them.”

William Roper: So, now you give the Devil the benefit of law!

Sir Thomas More: Yes! What would you do? Cut a great road through the law to get after the Devil?

William Roper: Yes, I'd cut down every law in England to do that!

Sir Thomas More: Oh? And when the last law was down, and the Devil turned 'round on you, where would you hide, Roper, the laws all being flat? This country is planted thick with laws, from coast to coast, Man's laws, not God's! And if you cut them down, and you're just the man to do it, do you really think you could stand upright in the winds that would blow then? Yes, I'd give the Devil benefit of law, for my own safety's sake!

“If there are witches, we need witch hunts.”

Unfortunately, it is not so simple.

First, you must use language that describes the witches clearly so they can be clearly identified.

Second, you must guard against unjust accusations and the fear of such.

Third, even assuming you can draft clear language for the relevant provision in the employment contract, you must explain which of the cases I have listed involve witches and which do not, and why therefore they should be covered by that provision. And if you think they all should, you must justify that too.

"On this scaffold Thomas More lies dead,
Who would not cut the Body from the Head."

Anon 2 - The "Teaching Roper the Importance of the Law" scene from A Man for All Seasons is my second favorite. The first is, of course, More's declamation to the court after being found guilty of treason but before he was sentenced to death.

"Nevertheless! It is not for the supremacy that you have sought my blood, but because I would not bend to the marriage!"

One of the great dangers of violence is that it is seductive. Violence, such as a terrorist attack, has a power to seduce others, drawing them into similarly violent behavior. Roper succumbed to this and needed to be reminded by his father-in-law that giving into an emotional response to evil is always dangerous.

More was able, by divine grace and dint of intellect and will, to see beyond his present situation, including Rich's weakness of character, to the larger picture.

We could learn from his saintly wisdom and restraint.