POPE FRANCIS HITS THE BALL OUT OF THE PARK ON SIN, FORGIVENESS AND THE NECESSITY OF CONFESSION AND IMPLIES THE NECESSITY OF THE ORDAINED PRIEST AS MEDIATOR OF THIS ENCOUNTER WITH GOD'S GRACES! 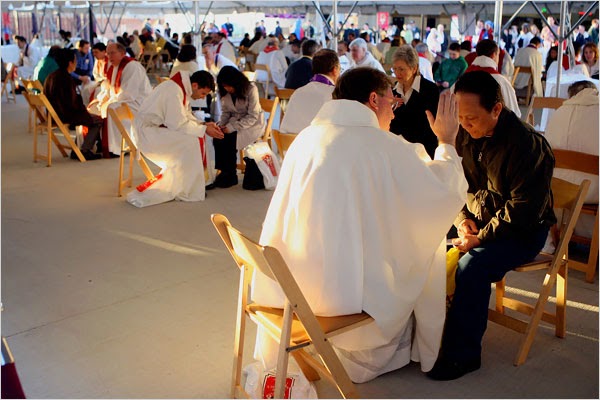 Pope Francis continues to promote the Sacrament of Penance and auricular confession and in a marvelous way. He did so again at the chapel of his place of residence at the Vatican Motel 6 this morning:


(Vatican Radio)  Pope Francis said confession is not a judgment but a meeting with God who forgives all our sins, without exception. His words came during his homily at his morning Mass on Friday celebrated in the Santa Marta residence.

Basing his reflections on an extract from St Paul’s letter to the Hebrews, the Pope said our God forgives all our sins, always and without exception and He rejoices when somebody asks him for pardon.  This God who reconciles, he continued, choose Jesus to set up a new pact with humanity and the cornerstone of this pact is forgiveness for our sins.

“First of all, God always forgives us.  He never tires of this.  It’s we who get tired of asking for forgiveness.  But HE does not tire of pardoning us.   When Peter asked Jesus: ‘How many times must I forgive? Seven times?’ – ‘Not seven times: seventy times by seven.’ Namely always.  That’s how God forgives us: always.  But if you have lived a life full of so many sins, so many bad things, but in the end, a bit repentant, you ask for forgiveness, He will immediately pardon you!  He always forgives us.”

Pope Francis said a doubt can arrive in a person’s heart over how far God is prepared to forgive us. But, he stressed, all you have to do is repent and ask for forgiveness and you don’t have to pay because Christ has already paid on our behalf.

The Pope went on to describe how God rejoices when somebody asks for forgiveness and at the same time He “forgets” or wipes out from his memory our sins.  The reason for this, he explained, is because what matters for God is for us to meet with him. Confession is not a judgment but a meeting with God.

“Confessions often seem like a procedure, a formality.   Everything is mechanical!  No!  Where’s the meeting in this? The meeting with the Lord who pardons you, hugs you and rejoices.  And this is our God who is so good.  We too need to teach (others): teach our children, our youngsters to make a good confession, because going to confession is not like going to the dry cleaners to get a stain removed.  No!  It’s about going to meet with our Father who reconciles, who forgives us and who rejoices.”
Posted by Fr. Allan J. McDonald at Friday, January 23, 2015

I am so confused.

How is it possible for a pope to say such beautiful, Catholic, Orthodox, traditional words one day but on another use a vulgar phrase like "breeding like rabbits"?

How is it possible that a man who never passes a statue that he didn't kiss is the same person allowing "debate" on things that are not open to debate i.e. allowing adulterers to receive communion without amendment of life, confession and absolution. How can you debate allowing sacraligeous behaviour?

Confusion and scandal from day one from this man. I am 100% serious when I ask the question, is he mentally stable?

This is how we need to understand Pope Francis' use of the word "mercy". It never means "there is no sin" but that "there is forgiveness if you apologize".

Any sexual excess is excused as "natural" and "born this way" without any culpability.

Swallow the camel....leads to straining out the gnats as they get in high dungeon over words! Now, if you had uttered some politically incorrect word 20 years ago, you must PAY! SINNER!

It's OK to slaughter the unborn in the womb, but don't you dare say something offensive to a grown adult! That's a hate crime!

See, they can offend you - that's OK. You deserve it, you "H8ER", BUT don't think you can repay the insult with another, that's an unforgivable offense...which you must grovel and plead for forebearance of their just wrath.

But sin against nature and God? Oh,no, it's natural, it's unavoidable. Men have to commit sodomy with each other as the only alternative would be cruel solitary confinement.

The wonder is how any of these folk get through a normal Mass without realizing that we start and proceed through the whole liturgy constantly admitting of being sinners in need of forgiveness and giving forgiveness to others from the heart?

Who is more judgmental? The one who admits to being a sinner or the one who insists he's a-OK and it's the entire world to blame for his problems (i.e. homophobia)?

Who is more self-righteous? The one who measures himself against the external (and eternal) law of God revealed by Jesus and handed down to us through the Church (other men) or the one who declares himself good because he subjectively FEELS GOOD?

Who lives the commands of God more, the one who personally, out of his own time and treasure seeks to give to the poor, orphans, widows, strangers... or the one who VOTES FOR OTHERS TO BE TAXED so that some 3rd party bureaucracy will "handle it"?

Am I a lover of the poor because I'm in favor of someone ELSE being robbed to help them or only if I personally help them?

The secular world has a law at odds with the Gospel. They don't believe they owe God anything so don't feel obligated to apologize for anything. Their obligation is to the Party or "winning side of history" (which is just short hand for the cool kids). Their idea of sin is a transgression against other politically powerful people, not God or nature or equals or inferiors (like the unborn or the uncool).

It's a grave darkness to believe one is incapable of sin and so to not even seek pardon.

"This is how we need to understand Pope Francis' use of the word 'mercy'. It never means 'there is no sin' but that 'there is forgiveness if you apologize'.

>I would say it this way: 'there is forgiveness if you repent and confess' . I can only imagine how the media would run with Pope Francis saying one need only to apologize to receive forgiveness of sin.

"Who is more self-righteous? The one who measures himself against the external (and eternal) law of God revealed by Jesus and handed down to us through the Church"

>Self-righteousness is seen in one who measures OTHERS (not himself )against the external (and eternal) law of God. There are those to be sure
who accuse others of being self-righteous, but do so in order to defend or excuse their own sinful behavior.