ALIEN INVASION AND CONSEQUENCES ONLY ONE BLOCK FROM SAINT JOSEPH CHURCH TODAY!!!!!! 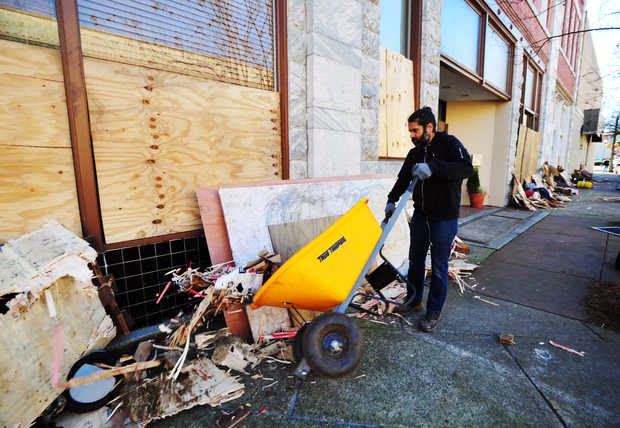 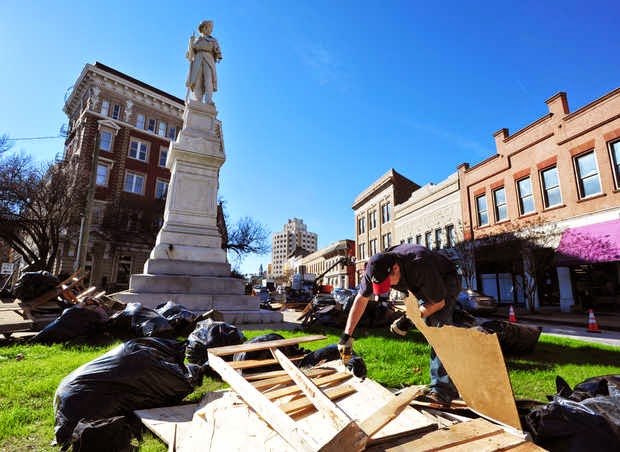 FROM THE MACON TELEGRAPH!

With boarded-up storefronts and garbage strewn everywhere, Cotton Avenue looks like it’s been hit by an alien invasion.

Set workers continued Monday to prepare the stretch of Cotton Avenue between Second and Cherry streets for the upcoming science fiction movie “The Fifth Wave,” a post-apocalyptic story set after aliens have invaded the planet.

Macon will be standing in for Dayton, Ohio, in the movie, which stars Chloe Grace Moretz (“Carrie,” “Kick-Ass”), Maggie Siff (“Sons of Anarchy”) and Ron Livingston (“Band of Brothers”), according to IMDb.com. The movie is based on a young adult novel by best-selling author Rick Yancey.

According to Yancey’s website, the move is scheduled to be released in November 2016. It’s being produced by Garden Films Productions for Sony.

The movie is the latest to be filmed here in the past couple of years, joining the likes of “Trouble With The Curve,” “42” and “Need For Speed” among theatrical releases. In addition, television series such as “The Originals” and “The Witches of East End” also have shot scenes here.

Paul Stanzi, location foreman for the movie’s construction team, said Monday that three scenes are scheduled to be filmed in Macon from Thursday to Saturday. Stanzi said there will be plenty of action filming here, including a helicopter landing near the statue at Cotton Avenue and Second Street and an exploding bus on Cotton.

Monday, Stanzi was overseeing a team using a blowtorch to separate a metal door from its frame in an alley off Cotton. He said the door needs to be changed because it doesn’t match the sequence that is being shot at the Norfolk Southern train yard in Atlanta. The sequence calls for the actors to be moving through the train yard, then emerge from the door in Macon. Stanzi said the original door will be replaced once the scene has been filmed.

While the trash may appear to be randomly strewn throughout the street, Stanzi said it’s been carefully placed in various places. The art department will then put the finishing touches on the desolation later in the week.

“We get everything done according to the art department’s direction,” he said. “There’s a science to it.”

Any signs on businesses that refer to Macon or Georgia, or any with a 478 area code, have to be removed or covered up, Stanzi said.

It may seem counterintuitive, but many downtown business owners said they are excited to see their shops and restaurants boarded up while workers dumped garbage in the area.

Amanda Meadows, owner of Amanda’s Cakery, said her shop is closed all week because the shooting schedule makes it impractical to be open. However, she said she doesn’t mind for a couple of reasons.
For one, she said, the movie production is compensating businesses that will be seen in the film. In addition, she said, the early part of January is typically slow at her shop, because people are still working on their New Year’s resolution to lose weight.

“They’ve been awesome,” she said of the production team. “They’ve been like a temporary family.”
James Bush, who co-owns The Vault where Cotton and Second meet, also will close his furniture store and antique shop.

“We’re very excited,” he said. “I’ll welcome any movie to Macon. It actually brings in business for us.”

In a news release, Macon-Bibb County spokesman Chris Floore said the filming is expected to have an estimated $400,000 impact on the city, including money spent for hotel rooms and restaurants.
Shane Woodall, who owns Main Street Pizza, said he already has seen an uptick in business, not only from crew members from the film but also from Macon residents who stopped by to watch the move setup work.

“Today we had a pretty good bump,” Woodall said Monday. “They’ve been super nice. I also saw a lot of local people outside who had come in to watch (the scene of) destruction.”
Woodall said his business will be closed Thursday and Friday, because he has to keep the lights off. His front window will be boarded up as part of the scene.

Josh Rogers, president and CEO of NewTown Macon, said the movie business can have a positive impact on downtown.

“I think it brings good local attention,” he said. “It’s part of the reason people want to live downtown. You can see all sorts of crazy stuff down here.”

I once applied for a "job" as an extra in a Clint Eastwood movie. I didn't get called. I could have been a movie star.

Perhaps you could apply for this one. One of the "good guys"....one of the aliens?


They did say they came in peace.